The Dascyllus aruanus (Linnaeus, 1758) known as Whitetail dascyllus (in Italy, Damigella codabianca), belongs to the class of the Actinopterygii, the ray-finned fishes, to the order of the Perciformes and to the family of the Pomacentridae that counts 29 genera and more than 400 species, along which the well known clownfishes.

The name of the genus Dascyllus, comes from the Greek “δάσκιλλος” (daskillos) = a fish of which Aristotle spoke, whilst the specific name aruanus = of Aru in Latin, refers to the Aru Islands, south of New Guinea, where this fish lives.

Actually, the geographic distribution of Dascyllus aruanus the is much vaster, including practically almost all tropical Indo-Pacific. Indicatively, we find it along the African coasts from the Red Sea up to South Africa, in Madagascar and adjacent islands, Seychelles, Maldives, India, Sri Lanka, Thailand, Indonesia, Papua New Guinea, and northwards, to the Philippine islands, Vietnam, Taiwan, China and Japan. It has then colonized all Oceania, from Australia and New Caledonia to the Cook Islands, Kiribati and Hawaii.

The Whitetail dascyllus swims even in a half metre of water and never goes down under the 20 m. It is almost always found close to madrepores rich of ramifications and hideouts, such as the Pocillopora damicornis, present in almost all its range, or the species of the genus Acropora that have sharp spikes that discourage the predators. 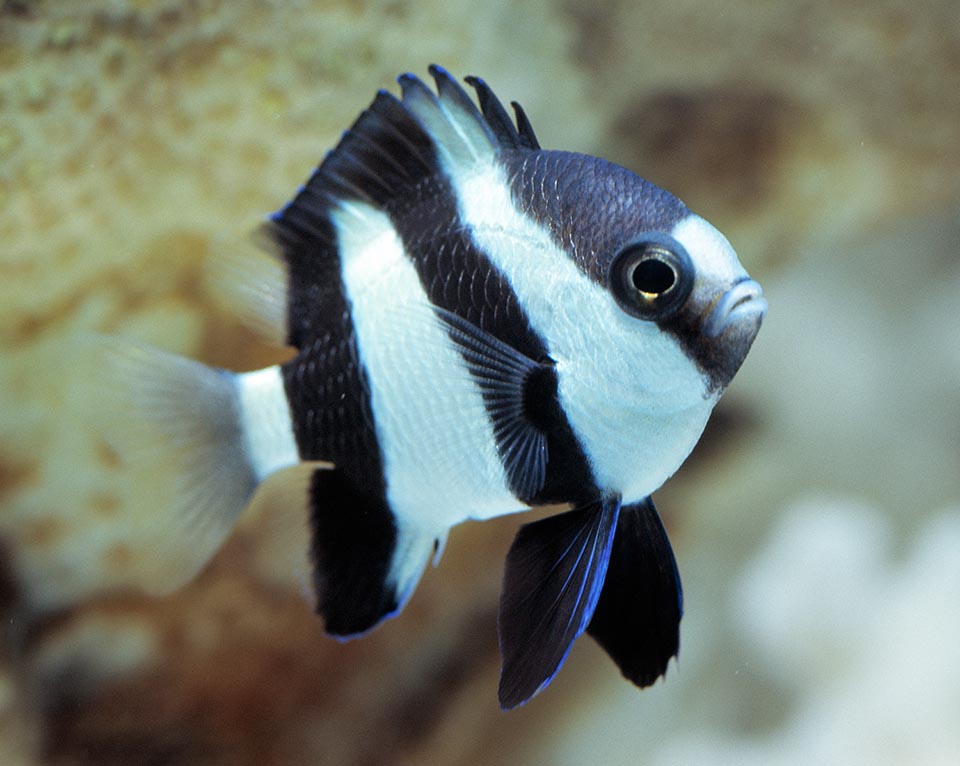 The Dascyllus aruanus is a species with high and arcuate back that does not exceed the 10 cm.

The Whitetail dascyllus is a diurnal species that swims in small schools under the authority of one male. Usually, it is matter of a ten of individuals, but if the madrepore chosen by the leader is large enough to host them all, they may be even 30-40.

The Dascyllus aruanus nourishes of plankton, small invertebrates, and algae, without forgetting, when is the case, the eggs of other fishes, including larvae and fishlings. 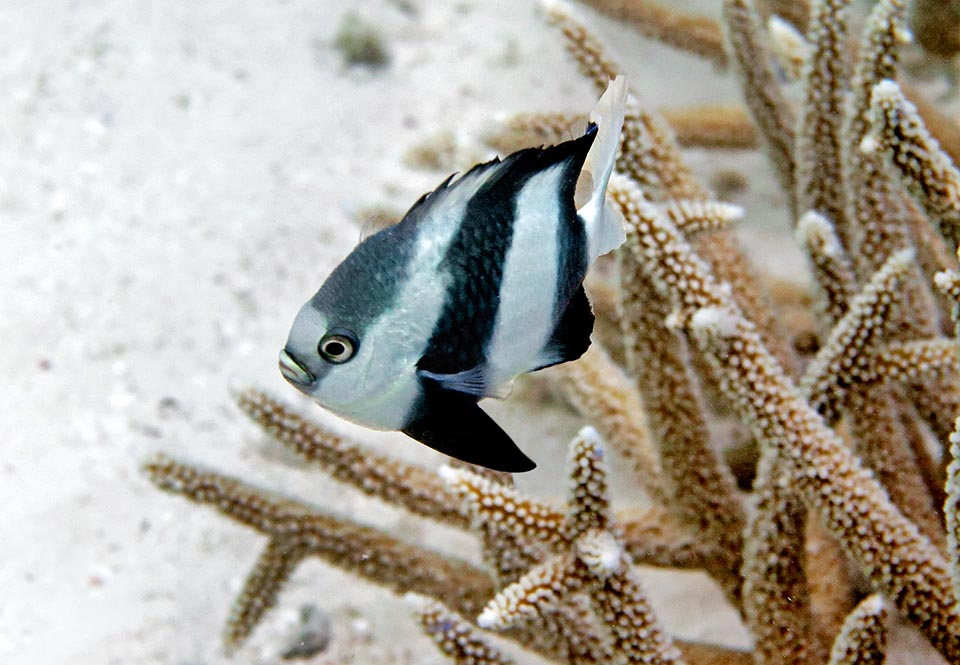 It is almost always found close to madrepores rich of ramifications and hideouts, with sharp spikes that discourage the predators © Gianemilio Rusconi

Apart from the urogenital papilla, long and conical in the males, and short with a depression in the females, the sexual dimorphism is absent. This is a protogynous hermaphrodite species, that is with females that may transform in males, called secondary, because in this species do exist also males, called primary, males since the birth.

In any case it is the male who choses carefully on the bottom the site good for the nest, where the female on duty will glue the eggs, and surveys them until hatching, aerating them with the fins in order to avoid the formation of molds. Usually, the eggs are laid at dawn, three days before the full moon or of before the black moon, and hatch in the evening of the third day of incubation when the tide reaches its peak and so disperses better the larvae while the possible predators of the reef fall asleep.

Inexpensive, robust and easy to feed, the Dascyllus aruanus is a frequent guest of the home aquaria but seen its wide diffusion it is not presently (2020) an endangered species. The populations decimated by the events may double their members in 1,4 to 4,4 years and the vulnerability index marks 26 on a scale of 100.