Its origins are uncertain, but it is very likely that it is native to the temperate zones of Mediterranean Europe and of Asia.

The name of the genus comes from the Latin term of the cabbage, introduced in literature by Plautus (III-II century BC), but the origin of the name remains uncertain, probably dating back to the Greek name Βράσκη (braske) or to the Celtic bresic (cabbage). The specific epithet reported by Theophrastus comes from the Latin name (navone), derived in turn from the Greek νᾶπυ nápu (mustard).

The rapeseed is a species cultivated in Europe, in northern Asia, in Japan, Korea, China, Russia, in southern Africa and in North America, in Australia and in New Zealand. It is also diffused in many areas as naturalized species having escaped cultivation.

An immense field cultivated with Rapeseed (Brassica napus). The world production of rapeseeds is of about 68 million tons per year © Jarek B

Furthermore, the various analyses of the genomes of the chloroplasts and of the mitochondria, lead us to believe that between the progenitors of B. napus may stand, as maternal donors, other species, unknown to us, of Brassica with haploid kit x=9, but do not exclude that B. rapa (x=10) can be the maternal parent of B. napus.

Finally, are not known really wild populations of B. napus and its origin and the improvement processes done by the man are still unclear.

The cultivation of the rapeseed began 4.000 years BC in India and about 2.000 years ago in China and in Japan. In Europe, cultivation began around the XIII century and then intensified starting from 1700.

Nowadays B. napus is diffused all over the world and is cultivated for the production of fuel oil and of the cattle fodder.

This plant cultivation began 4000 years BC. in India and about 2000 years ago in China and Japan. In Europe has begun around the XIII century © Jean-Marc Fondeur

Hence, the seeds represent the most important commercial part of the plant. As an average they contain 45% of oil, 25% of proteins, 5-7% of fibre, 4-8% of glucosinolates.

In Europe and in Asia the winter cultivation prevails due to the necessity of the plant to be exposed to the cold (vernalization) so that the flowering process can begin. As a matter of fact, sowing is done in autumn, the young plant forms the basal rosette in winter and in the following spring it produces the floral scape and the blooming that normally takes place in late spring. The fruitification begins after 6-8 weeks and can last up to mid-summer.

B. napus is an annual or biennial species and presents erect stems, simple or ramified, glabrous or little hairy that can be 1,3 m tall. In the biennial forms the basal leaves are arranged in rosette with 15 cm long (often winged) petioles, lyrate-pinnatifid 5-25 cm lamina, partially lobate, and with glabrous or scarcely hairy surface. The cauline leaves are waxy, sessile with auriculate base, amplexicaul and with entire margins and glabrous lower pagina. The inflorescences are racemes forming on the main and axillary branches. Blooming begins from the base of the inflorescence. 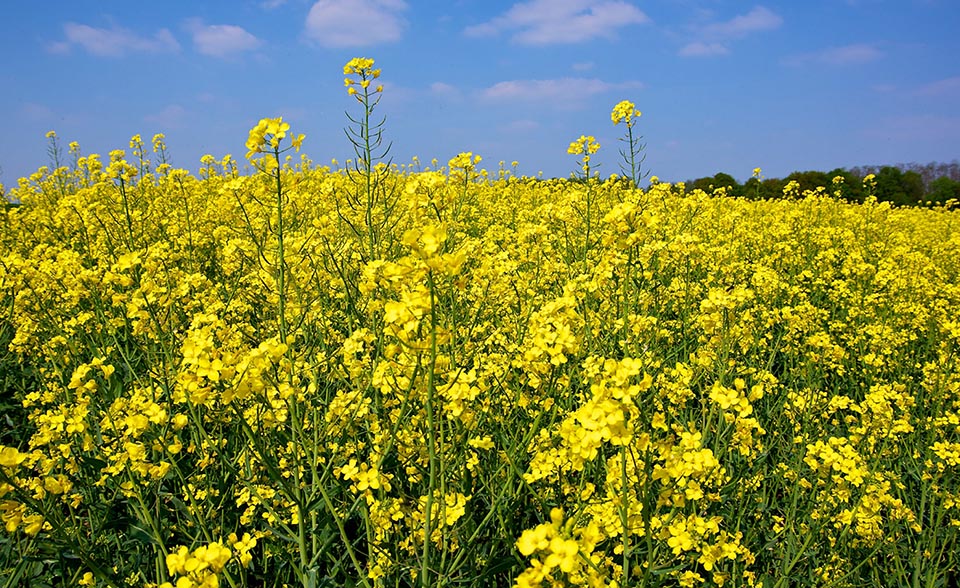 The flowers are regular, of pale yellow colour, with four 6-10 x 1,5-2,5 mm sepals, and four, 10-16 x 6-9 arranged in a cross, widely obovate, petals with 5-9 mm claw and rounded apex. The stamens are tetradynamous, that is four long and two short and with 1,5-2,5 mm anthers and 7-10 mm filaments. The ovary is superior. The flowers are pollinated by Apoidea of the genera Bombus and Apis. In the continental Europe countries, there is an important production of honey by Apis mellifera, in Italy, in the zones of cultivation, are obtained unifloral honeys as well as spring polyfloral ones. After the fecundation, the petals fall and are formed fruits that are cylindrical 60-100 x 2,5-4 mm siliquae, sessile, linear with light constrictions, attenuated in a 10-16 mm conical beak. The seeds, arranged in only one row in the fruit, are spherical in number of 12-18 per each cavity, usually of dark brown colour measuring 1,2-1,8 mm. Their tegument is reticulate-alveolate and if wet are not mucilaginous. The senescence of the leaves begins with the ripening of the siliquae and their fall begins from those placed lower.

The cotyledons are bent longitudinally around the radicle in the seed (conduplicate).

The plant grows in clayey soils organically rich, with pH between 6 and 7, drained but constantly humid and in full sun even if it tolerates the light shade and withstands winter temperatures up to – 12 °C. 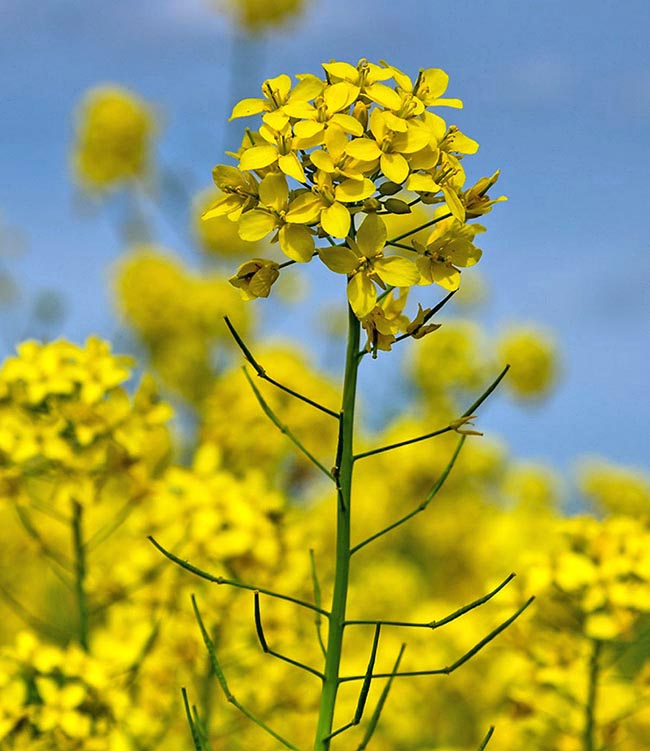 Only two subspecies are recognized:

Brassica napus subsp. napus L. (rapeseed) is an annual plant with thin roots, widely cultivated for the production of oil seeds. It easily escapes the cultivation, naturalizing in the not cultivated grounds.

Processes of genetic improvement have been done, during the cultivation, increasing the yield in oil seeds, the resistance to diseases and eliminating or reducing in the seeds the unwanted substances such as the erucic acid and the aliphatic glucosinolate. In fact, the ingestion of oils containing erucic acid may lead during the years to the arising of the disease called lipidosis of the myocardium with consequent cardiac injuries.

The first variety, called Cambra from “Canadian Brassica”, with a low content of erucic acid and of glucosinolate was obtained in Canada in 1974 with recourse to the UV rays.

Later on, they obtained other varieties of rapeseed with seeds having a lower content of erucic acid and in 1980 they reached the production of the so-called “Canola” (Canadian Oil Low Acid) with less than 2% of erucic acid.

Because of these characteristics, this variety of rapeseed has been diffused in the whole world. It is almost free of erucic acid and produces oil for human feeding.

For the non-food industry are utilized the old varieties with high content of erucic acid as from it is obtained the erucamide (C22H43NO) that is employed in the sector of the “food packaging” for the production of food containers. The main danger of this use comes from the possible risk of migration of the erucamide from the polymeric material of the container to the foodstuffs with which it can come in contact and contaminate them being a potentially toxic substance.

Depending on  the content of erucic acid and of glucosinolates, we distinguish four varietal types:

– A “double high”: high content of erucic acid and glucosinolates; 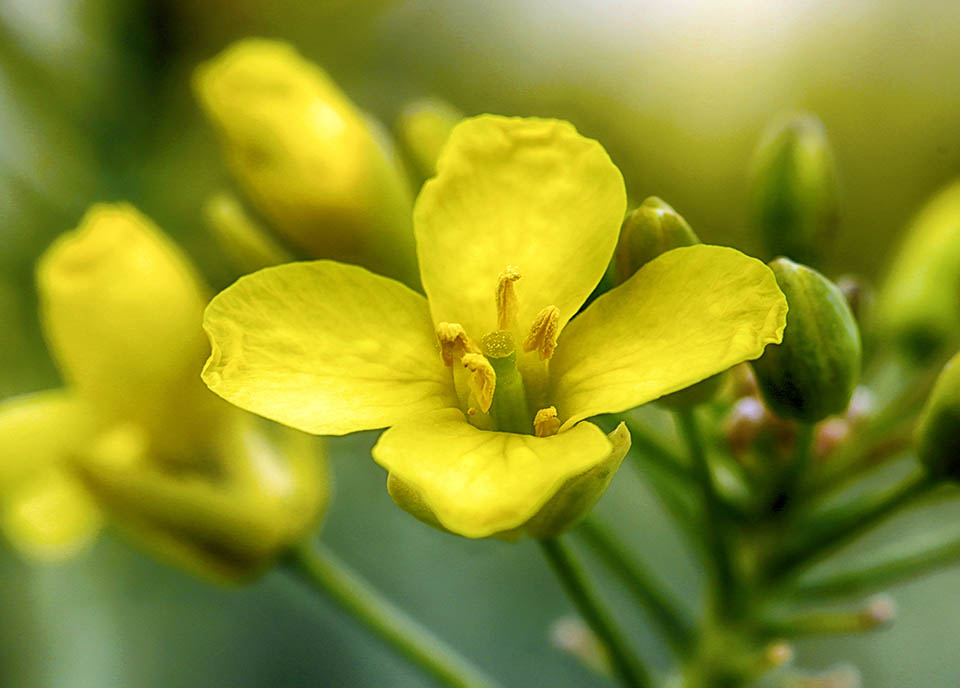 Sowing is done in autumn, the basal rosette forms in winter and blooming occurs normally in late spring © Dominique Fillion

For the flours intended for zootechnical use the community regulations prescribe the absence of erucic acid from the oil extracted and a maximum of 30 micromoles [µmol] of glucosinolates per gram of air-dried flour.

In 1995 the Monsanto Company created the first variety of genetically modified rapeseed able to resist herbicides with glufosinate-ammonium (phosphinothricin).

Since then, the traits of tolerance to the herbicides (HT, Herbicide Tolerance) have been developed for four active principles present in the herbicides: glyphosate, glufosinate-ammonium, bromoxynil and imidazoline.

The rapeseed is now classified among the best oilseed crops in the world. The by-product of the cracking process for the extraction of oil from the seeds is widely utilized as fodder for livestock, poultry, pigs and fishes. 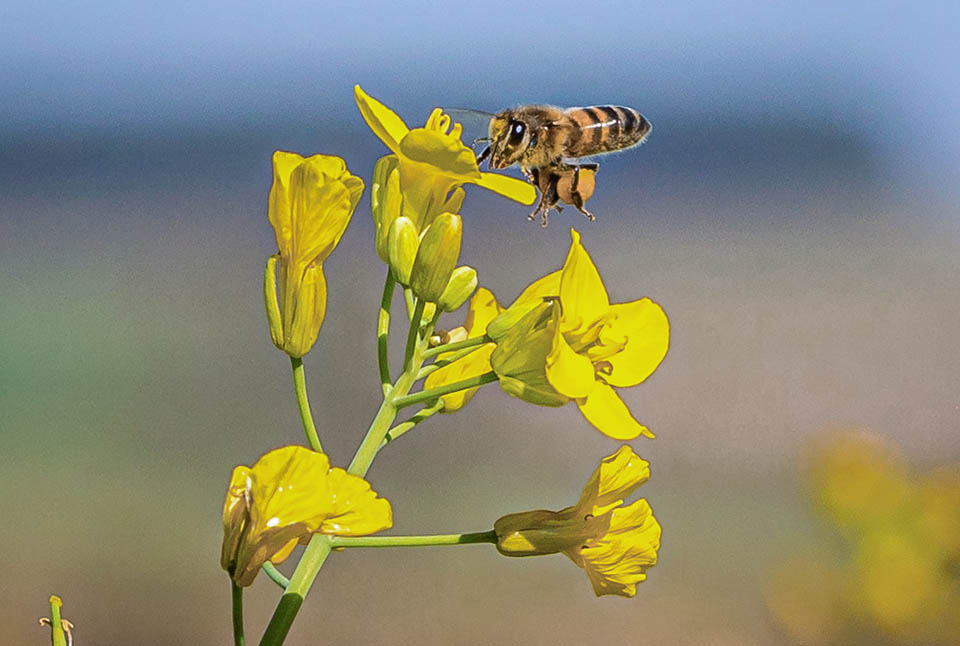 Flowers are pollinated by the genera Bombus and Apis. The bee honey quickly crystallizes and is added in very small doses to other honeys to get a creamy product © Wenderson AraujoTriluxCNA

The rapeseed produces a lot of nectar from which the bees get a honey clear but pungent that crystallizes quickly already in the honeycomb and therefore it is to be extracted immediately after the production. On the other hand, its tendency to crystallize renders it suitable for being added in very small quantities to other honeys for obtaining a good and creamy honey.

The rapeseed also has phytotherapy properties. The root and the seeds have antibacterial properties thanks to the presence of thioglycosides.

Rapeseed oils are recommended for those suffering from asthenic syndrome or having nervous system disorders. They are also an excellent diuretic and increase the production of gastric juices stimulating the appetite. The flowers improve the immune system and have positive effects on the genitourinary system. The leaves add a spicy taste to the cooking dishes and are rich in vitamin C and organic acids. In Australia and in New Zealand the plant is used in stews, soups and as flavour enhancer.

The juice of the leaves helps in healing and disinfecting wounds. Recently, it has been demonstrated that the rapeseed improves sleep, fights chronic diseases, increases the level of oxygen in the cerebral tissue and tones up the whole body.

The rapeseed oil is also a good alternative fuel to oil. 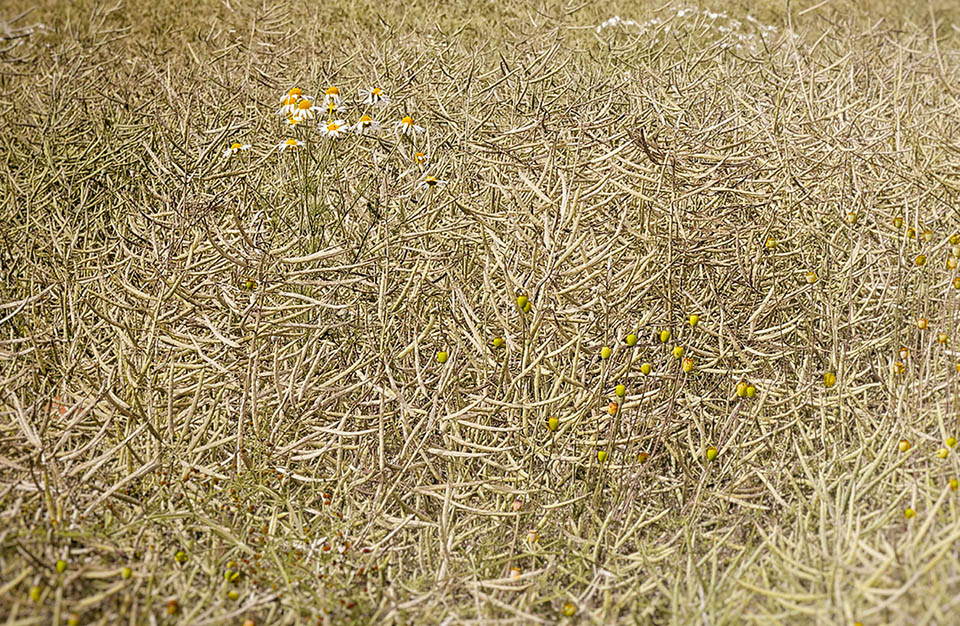 Fruitification occurs after 6-8 weeks and can last until mid-summer. besides winter ecotypes, with vernalization exigencies, do exist also spring ecotypes © Ralf Westhues

Without going into the merits of the debate among those who support the benefits and who, on the contrary, highlight the negative aspects, we point out that the gene present in the varieties genetically modified is, probably, the main responsible of the reduction of the number of bees.

The intensive cultivation of B. napus is subject to numerous diseases caused by several agents: fungi, insects, bacteria.

In Canada by the end of the nineties of the last century there were selected cultivars having a genetic resistance to the fungal pathogen Leptosphaeria maculans (Sowerby) P.Karst. 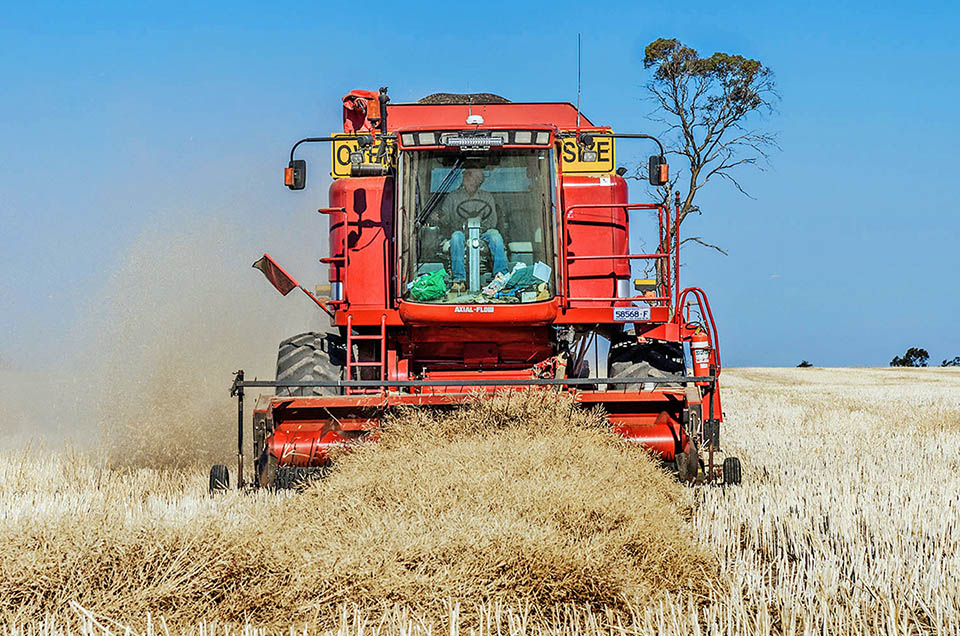 Mechanical harvest. With genetic improvement yield in oilseeds has increased, eliminating or reducing the presence of noxious substances and resistance to diseases © Beverley Pohlner

The cultivar resistant to Plasmodiophora brassicae Woronin  called “CR” (clubroot-resistant), was furnished to the farmers in 2009, quickly followed by many others. however, the pathogen, that infects the roots, in turn has developed resistance to this variety, therefore, it has been necessary to modify also the agronomic practices by improving the drainage as well as by introducing the use of the lime in order to increase the pH of the soil limiting the development of the disease.

The rapeseed is subject also to the cancer of the stem, mycosis known as “blackleg disease”, caused by Phoma lingam (Tode ex Fr.) Desm. The fungi Alternaria brassicae (Berk.) Sacc. and A. brassicicola (Schwein.) Wiltshire cause leaves to dry out.

Other pathogenic fungi that can cause damage to the cultivations of rapeseed are Sclerotinia sclerotiorum (Lib.) De By. and Peronospora brassicae Gaumann. 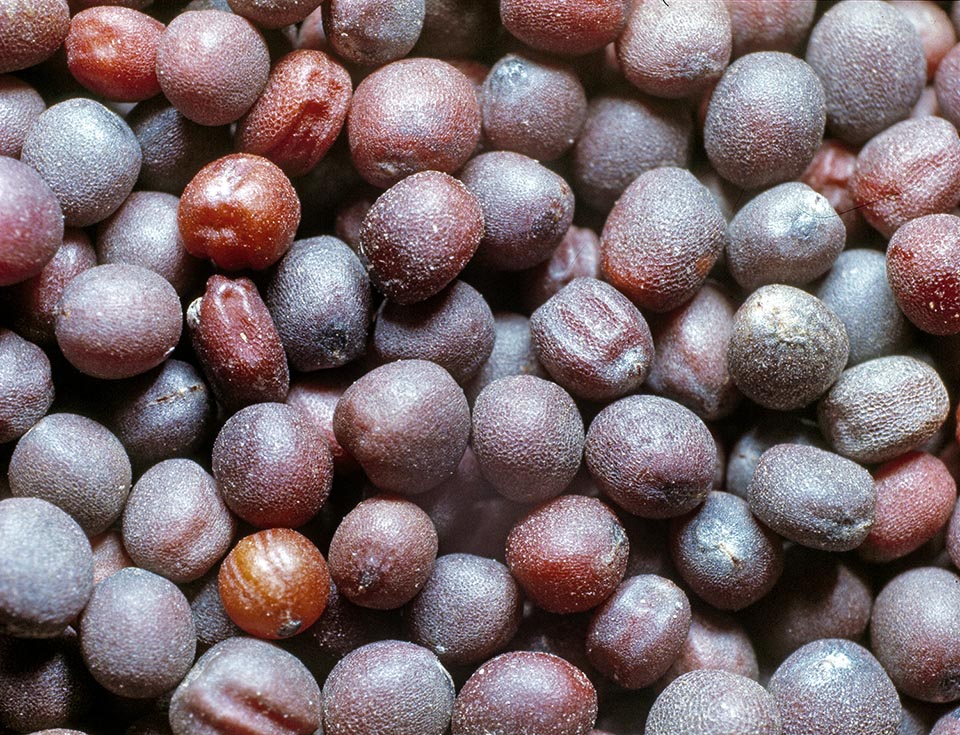 Rapeseed is classified among the world’s best crops of oily seeds. Food plant with proven and promising medicinal virtues. The flowers improve the immune system and the plant has also a vast employment in the production of feed for livestock, poultry, pigs and fishes. Finally, rapeseed oil is also a good fuel alternative to oil © Giuseppe Mazza

The swede midge (Contarinia nasturtii, Kieffer, 1888) is a small fly whose larvae infest the plants of rapeseed causing damage with twists to the stems and to the leaves. This small fly is native to Europe and to Turkey and has been introduced in northern America, where it is very harmful. Finally, we mention Xanthomonas campestris pv. campestris (Pammel) Dowson, a gram-negative bacterium that, through the foliar surface, spreads all over the plant through the wood vessels and causes the black rot, one of the most destructive diseases of the rapeseed and of the other crucifers cultivated in all the world.