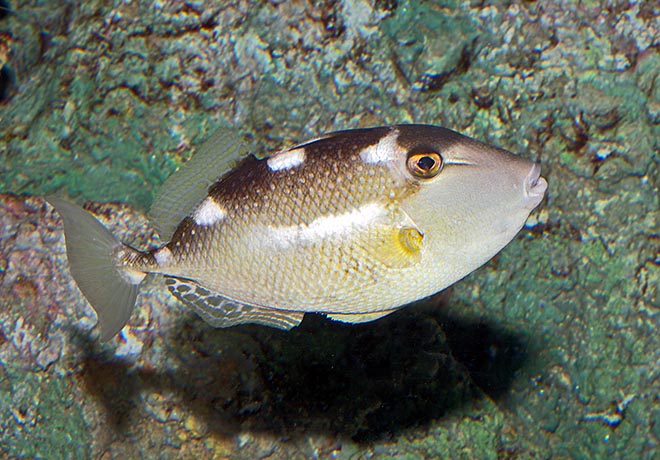 Abalistes stellaris has an unusual look for a triggerfish © Giuseppe Mazza

The Starry triggerfish (Abalistes stellaris Bloch & Schneider, 1801) belongs to the big class of the Actinopterygii, the ray-finned fishes, to the order of Tetraodontiformes and to the family of the Balistidae, the well known triggerfishes.

The name of the genus “abalistes” means in Latin “without crossbow”. In fact, the slender shape and the absence of arcuate fins do not evoke at first sight this old war weapon.

The name of the species “stellaris” = stellar in Latin, refers to the livery quilted by bright spots that shine like stars in the bottom of the sea.

It is present in the tropical waters of the Indian Ocean, of the Eastern Atlantic and of the Western Pacific. We find it at St. Helena Island and then in South Africa on the Atlantic and Indian Oceans coasts. From these ones it goes northwards up to the Red Sea and the Arabic Sea, after having colonized the Madagascar. As an indication, it is frequent also at the Seychelles, the Maldives, in India, Sri Lanka, Thailand, Australia, Indonesia, New Guinea, Micronesia, Philippines, Taiwan and China up to southern Japan. Eastwards, it is at home at the Solomon Islands, Nauru, Fiji and Kiribati. Southwards, it reaches Vanuatu and New Caledonia.

It lives along the coasts, not far from the bottom, often in muddy waters even at 100 m of depth. It seems that it performs migrations, following the feeding needs.

It can be 60 cm long, even if the fished specimens rarely exceed the 40 cm. The body is flat, ovoid, protected like the other triggerfishes by a coating of bony scales. The first dorsal fin is formed by three spiny rays, blockable, for defence, in erect position. Like all triggerfishes, they keep armed vertically also after the death of the animal; because the first spine, long and sharp, has the base embedded in a hole of the second and for freeing it is necessary a movement of the third one. 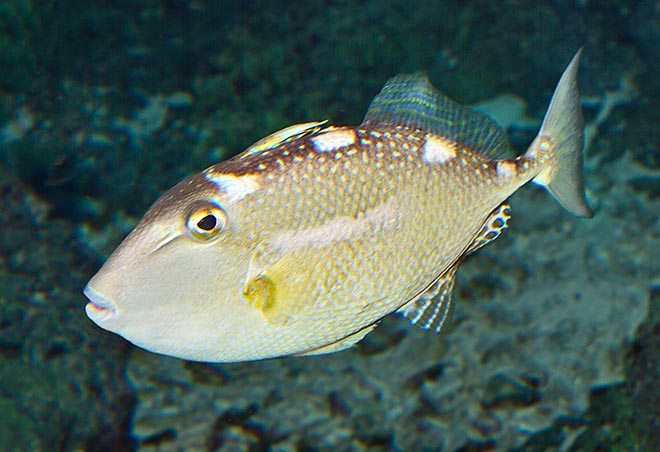 Particularly long, it is a good deterrent for the predators, which might get injured while swallowing the fish, and a manner for finding secure shelters. It is in fact enough to choose as den a cavity with a narrow entry, where it can get in only with lowered fin. Once inside, the fish opens the trigger and can stay there safe, sure of not being taken out during the sleep by the wave movements.

The livery, darker on the back with big white spots, is greenish in its whole, with olivaceous, brown or yellow zones, punctuated in the upper part by small white spots. Also the fins, translucent or pale, have drawings with spots and dark lines. On the sides, over the pectoral fins, we often remark a clear horizontal band.

The starry triggerfish lives solitary or in small schools nourishing of benthic invertebrates, like crabs, molluscs and sea urchins, but also of young fishes, like those belonging to the genus Nemipterus.  The eggs are fecundated in a nest dug in the sand and the female, standing watch till the hatching, does not hesitate in attacking the intruders.

Abalistes stellaris is often fished for the consumption as fresh or for being sold, dried, in the local markets. The populations need 1,4-4,4 years for doubling the number and in 2022 the fishing vulnerability index is moderate, scoring 44 on a scale of 100.