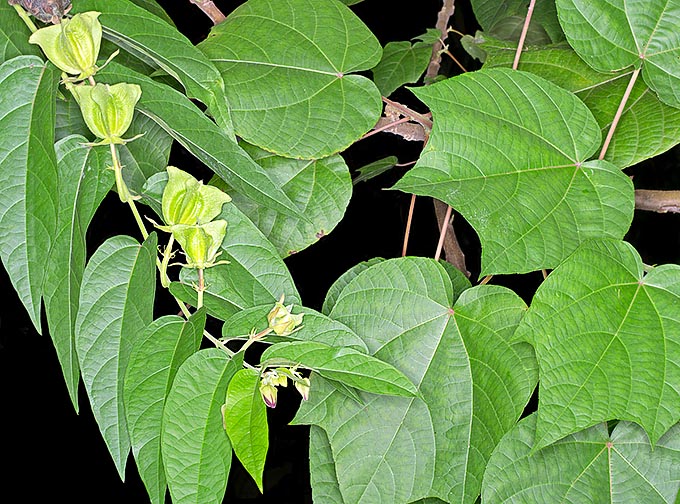 The species is native to Bhutan, Indonesia, Malaysia, Micronesia, Myanmar, Nepal, Northern India, Solomon Islands, Southern China, Sumatra and Thailand where it grows in the forests, often at the borders of clearings and along water streams, from the sea level up to about 1200 m of altitude, in climates characterized by high rainfall distributed all over the year.

The name of the genus comes from the Greek “ἀ-” (a-) (privative alpha) “βρῶμα” + (broma) = food, therefore ‘inedible’; the specific name is the Latin adjective “augustus, a, um” = august, majestic.

The Abroma augusta (L.) L.f. (1782) is a shrub or small evergreen tree, 6-10 m tall, but that in cultivation is maintained lower, with cylindrical stems that in the specimens in the wild may reach a diameter of 15-30 cm, greyish bark and branches covered by short, biting and stinging hair that may cause dermatitis in sensitive people. 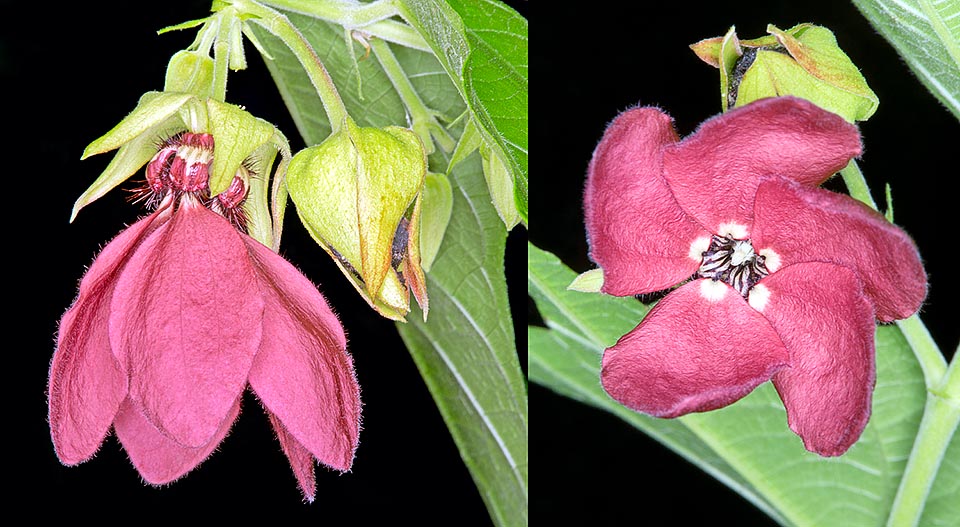 Close-up of the hanging flower, seen from side and from below, of this relative of our mauve at home in the forests of Bhutan, Southern China, Northern India, Indonesia, Solomon Islands, Nepal, Malaysia, Myanmar, Sumatra and Thailand. The inflorescence bears 1-5 hermaphrodite flowers of 4-5 cm lasting one day only © Giuseppe Mazza

The leaves, grouped in the terminal part of the branches, are alternate, simple, quite variable as per shape (heterophylly), from tri-penta lobed, on an up to 40 cm long petiole, 20-40 cm long and broad, usually on the vertical (orthotropic) branches, to entire, on a 1,5 cm long petiole, lanceolate, 10-20 cm long and 8-12 cm broad, usually on the horizontal branches (plagiotropic); also the leaves are covered by irritating hair. 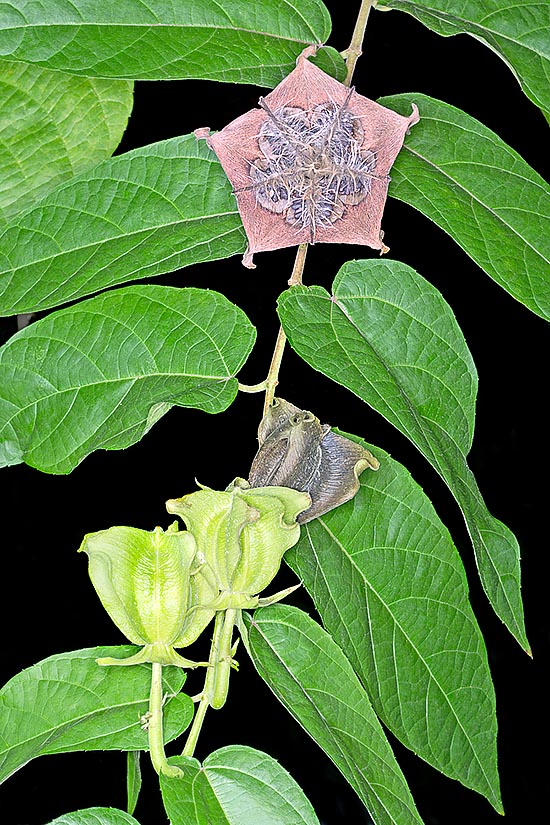 The inflorescences, mainly on the horizontal branches on short peduncle, are terminal scorpioid cymes or opposite to the leaves, carrying 1-5 hanging hermaphroditic flowers, lasting one day only, of 4-5 cm of diameter, with penta-parted persistent calyx with lanceolate lobes, 1,5-2 cm long, greenish, and 5 ovate petals slightly concave, 2-3,5 cm long and about 1 cm broad, of red or dark purple colour. Due to the shape of the reproducting organs and the hanging position of the flower the self-pollination is prevented and the fecundation depends totally on the pollinating insects that ensure the dispersion and deposition of the pollen, primarily Japanagromyza tristella Thomson, 1869 (Diptera: Agromyzidae).

The fruit, arranged in erect position, is an ovoid dehiscent capsule with pentagonal section, truncated and winged at the apex, about 5 cm long and 4 cm of diameter, with 5 loculi containing numerous ovoid seeds, 4 mm long and of 2 mm of diameter, blackish.

It reproduces by seed, that has a low lasting germinability, previously kept in lukewarm water for two days, just interred in organic loam, with addition of siliceous sand or agri-perlite to improve the drainage, maintained humid at the temperature of 24-28 °C.

The germination times are short, 10-30 days, and the first blooming, in the optimal conditions of cultivation, takes place after about 4 months; it easily reproduces by cutting and through the root suckers.

Fast growing species, needs tropical and humid, rainy subtropical climates, as it does not bear long drought periods, an exposition in full sun to partially shaded and well drained soils, rich of organic substance, acidic to neutral; in areas with periods of drought needs regular waterings, but allowing to dry up slightly before watering again.

It benefits from regular fertilization utilizing a balanced product with microelements.

It may be cultivated in pot, to be sheltered during the coldest months where the climate does not allow the continuous permanence in open air, in very luminous position with day temperatures not under the 20 °C and minimum night ones over the 15 °C, even if it can stand some degree lower values provided occasional and short lasting. 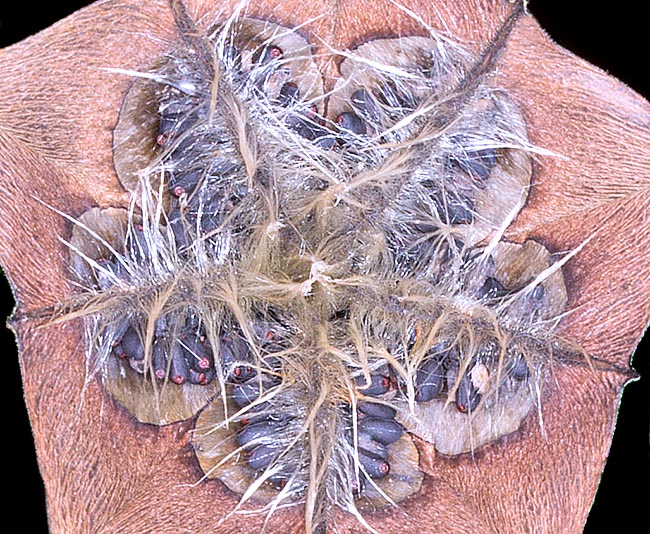 Blackish seeds have a low lasting germinability, but then the plant grows fast and can bloom in just 4 months. Roots, stems and leaves have medicinal virtues. The seeds contain linoleic, palmitic, oleic and stearic acid © G. Mazza

From the bark they get a very resistant and lasting fibre similar to jute, utilized for a multitude of articles, that would deserve a better diffusion.

Since remote times it has a prominent position in the traditional medicine, in particular in the Indian one, where roots, stems and leaves of the plant are utilized for various pathologies, among which diabetes mellitus, dysmenorrhoea, bronchitis and skin ailments, and as aphrodisiac; the seeds contain the 20% of oil formed by linoleic (70%), palmitic (15%), oleic (10%) and stearic (5%) acids.

At times is cultivated in the gardens as ornamental due to its characteristic flowers, despite the irritating hair covering all parts of the plant.