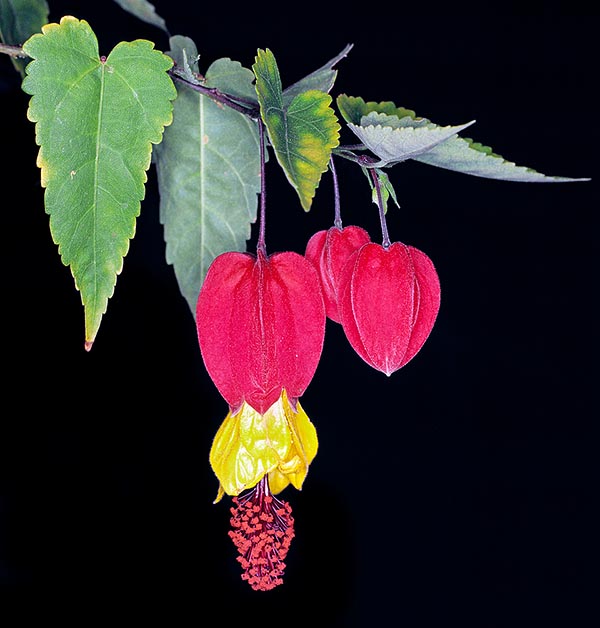 The precise origin place of the Abutilon megapotamicum (A. Spreng.) A. St.-Hil. & Naudin (1842), which is cultivated since long, is not known, it is thought to be the south of Brazil, in any case, South America.

The name of the genus comes from the Arabic name “aubutilun”, which was given by the great Persian philosopher and physician Abu ‘Ali al-Husayn ibn Sina (980-1037), known in the western world with the name of Avicenna, to a plant belonging to the family of the Malvaceae; the name of the species is the combination of the Greek words “megas” = great and “potamicum”, from the Greek “potamos” = river, with possible reference to the presumed place of origin, the Rio Grande (Brazil).

It is matter of evergreen shrubs, with long thin and arched branches, which can reach the 2,5 metres of height, if cultivated in open ground, which are suitable for being arranged as espalier; the leaves, long about 6-8 cm, of ovate or just trilobed form with heart shaped base, sharp, are of a pale green colour, but varieties with variegated leaf do exist.

The flowers, hermaphrodite, long peduncled, pendent, bell-shaped, have short lemon-yellow petals, which come out into view from a bright red calyx of about 3 cm of diameter; the column which stretches out beyond the petals, of a brown-red colour, exalts its ornamental effect. The blooming is continuous from spring to autumn. It reproduces by seed, by semi-woody cutting in summer, or by air layering.

This plant is cultivable in climates going from the tropical to the temperate, as it bears, for short periods, temperatures up to about -8 °C, even if with damage to the aerial part; it needs well drained soils, but kept humid, preferably acid or neutral, and an exposition in full sun, or slight shade; elsewhere, they can be cultivated in container, even for the decoration of indoor spaces, where it is often utilized in hanging pots, seen its natural rather hanging down aspect.