The Acanthocalycium spiniflorum (K. Schumann) Backeberg (1935) is native to the northern part of Argentina (provinces of Catamarca and Cordoba), where it grows in the semi-arid areas of the east side of the Andes, mostly between the 1.000 and the 2.000 m of altitude.

Usually solitary plant with pale green stem, initially globose, then cylindric, with woolly apex, slightly depressed. Of rather slow growth, it can reach the 16 cm of diameter, with a height which, in cultivation, is no more than 20 cm, even if old wild specimens may reach the 60 cm of height. It has 16-20 ribs, tall about 1-1,5 cm, slightly tubercolate, with areoles initially woolly of about 5 mm of diameter and spaced of 1-2 cm. The areoles have 10-15 thin thorns, slightly curved, of a more or less yellowish colour, with darker apex, tending to grey while ageing; the radial thorns are 1-2 cm long and the central ones, 3-4 cm.

The diurnal flowers bloom in the late spring-summer, from the areoles of the apical zone, are funnel to bell-shaped, with 4-5 cm of diameter, with the floral tube provided with pale green woolly scales ending in a papyraceous thorn. The outer tepals are of mauve colour with a green central band, the inner ones are white to pale mauve; the flowers of the populations living at greater altitudes have a more intense colouration. 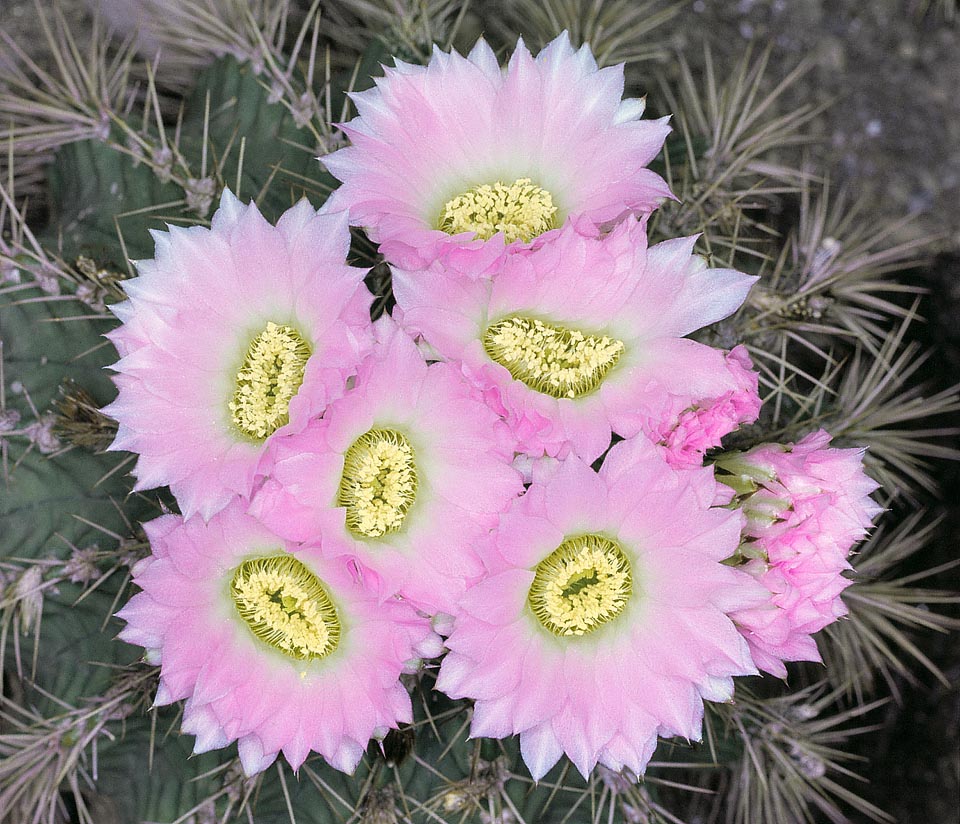 Acanthocalycium spiniflorum grows in North Argentina on the eastern side of Andes between 1000-2000 m of altitude. Showy day bunches of flowers, of 4-5 cm of diameter, per a just 16 cm stem that rarely exceeds 20 cm in cultivation. Quite slow growth. Does not fear cold, up to -10 °C, but fears roots rottenness © Giuseppe Mazza

The fruit is a berry of about 1 cm of diameter, containing blackish ovoid seeds. It reproduces by seed and blooms when 3-4 years old.

Plant appreciated by the collectors and also by those who begin to love the cultivation of the cacti, due to its facility of cultivation and its showy flowering. It is to be cultivated in full sun, or otherwise in the maximum possible luminosity, on particularly porous and draining moulds which can be formed for about the 50% by common fertilized garden earth and for the rest, in equal amount, by sand (or agriperlite) and crushed stone without dust.

It has a good resistance to the dry cold, as it can resist, for a short time, to -4 °C and even to -10 °C in case of the clones with the violaceous flowers coming from the major altitudes, but it is better not to expose it to temperatures close to zero in order to avoid the formation of possible anti aesthetic dots on the epidermis. In summer, during the vegetative period, it is to be watered on a regular basis, but allowing the mould to dry up almost completely before watering again; it is to be kept almost dry in winter.

The plant is enrolled into the Appendix II of the CITES (plant whose trade is regulated at international level).

Acanthocalycium spiniflorum was last modified: May 6th, 2018 by Giuseppe Mazza