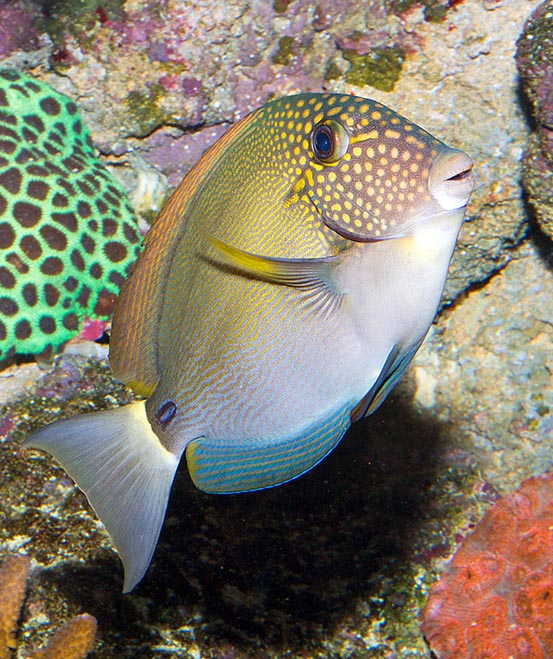 The White-freckled surgeonfish (Acanthurus maculiceps Ahl, 1923) belongs to the class of Actinopterygii, the ray-finned fishes, to the order of Perciformes and to the family of Acanthuridae.

The etymology of the genus Acanthurus comes from the Greek “akantha” = spine and “ura” = tail, due to the spine, sharp as a razor, these animals have on both sides of the caudal peduncle.

It is present in the tropical waters of the eastern Indian Ocean and in those of the western Pacific Ocean.

Just to give an idea of its distribution, we find it at the Maldives, the Andaman Islands, the Cocos Islands, at Christmas Island, in Indonesia, Australia, New Guinea, Micronesia, Philippines, Taiwan and, south of Japan, in the Ryukyu Islands. Eastwards, it has reached Samoa.

Excellent swimmer, it lives also in the troubled waters on the outer side of the reefs not under the 30 m of depth, usually in the zone between the 3 and 15 m, where the seaweeds it eats do abound. 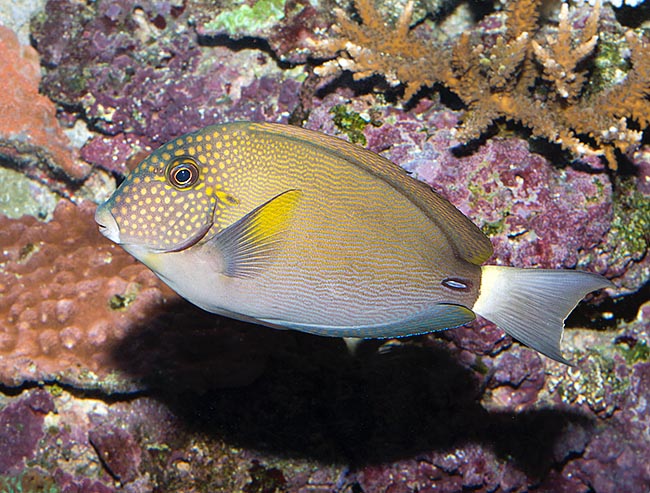 The head, as the name of the species indicates, is conspicuously yellow spotted and on the caudal peduncle catches the eye a white vertical band after the characteristic scalpel of the surgeonfishes.

It is highlighted, on both sides, by a dark brown oval which emphasizes the more or less blue coloured housing of the sharp and venomous spine. This is a reminder for the aggressors who have experienced it.

Another typical mark is the terminal yellow part of the pectoral fins, but we have to add that, depending on the circumstances, the livery may incredibly change all over the body turning from pale yellow to dark brown in a few seconds. 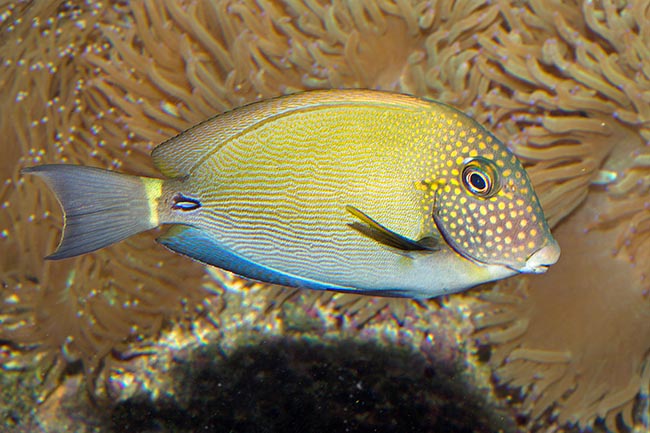 The White-freckled surgeonfish lives solitary or in small schools, nourishing of filamentous seaweeds and of the pellicle of microscopic algae and debris covering the sea-beds, but grazes also more consistent benthic seaweeds. It is, in short, the sweeper of the reefs.

During the reproductive period the males often get showy colours and the fecundated eggs are abandoned to the currents. The juveniles have a sand white coloured livery and only by around the 20 cm of length they gradually get the colours and the drawings of the adults.

The populations may double in 1,4-4,4 years, but the vulnerability index of the species is not to be ignored as it is already of 43 on a scale of 100.