The Yellowfin surgeonfish (Acanthurus xanthopterus Valenciennes, 1835), belongs to the class of the Actinopterygii, the ray-finned fishes, to the order of the Perciformes and to the family Acanthuridae.

The name of the genus Acanthurus comes from the Greek “akantha”, spine, and “ura” = tail, due to the typical sharp spine these fishes do have on both sides of the caudal peduncle.

The name of the species xanthopterus, = comes from the Greek “xanthos” = yellow and “pterón” = feather, wing, and hence in our case, “with the yellow fin” with reference to the colour of the pectoral fins.

It has an extremely vast distribution in the tropical Indo-Pacific. Starting eastwards from the African coasts, reaches the Galapagos and the Pacific coasts of Central America from Mexico to Ecuador. Northwards, it has colonized Japan and southwards, after the Australian Great Barrier Reef, New Caledonia. 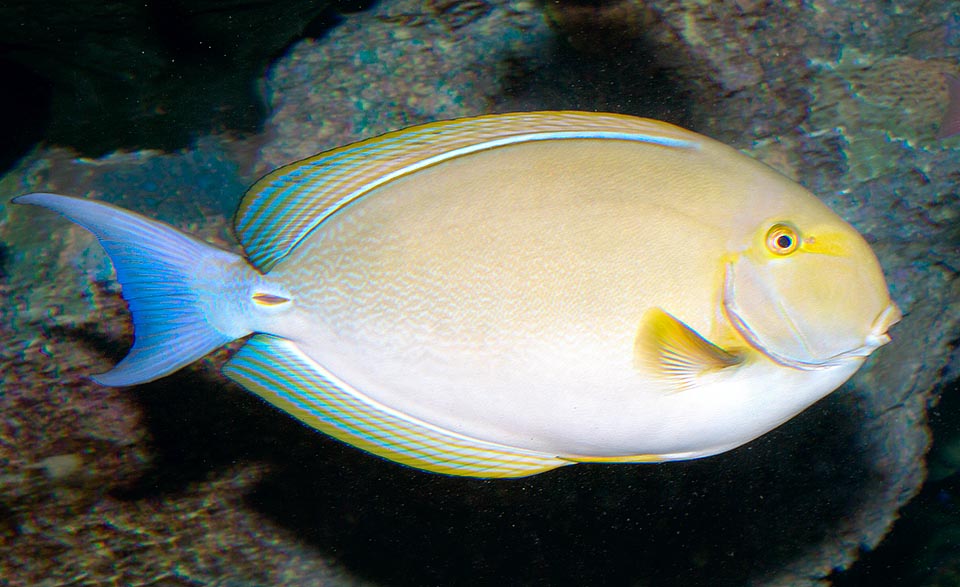 With a 70 cm record of length, the Acanthurus xanthopterus is probably the biggest extant surgeonfish © Giuseppe Mazza

The adults usually swim isolated or in small schools on the sandy bottoms of the lagoons, among the corals, but also on the outer side of the reef, up to 100-120 m of depth, where rarely the other surgeonfishes do go. The young, in schools remarkably more numerous, frequent only the shallow waters, often murky, rich of diatoms, sediments and filamentous algae.

With a record length of 70 cm, the Acanthurus xanthopterus is probably the biggest surgeonfish, even if the normal size of this species gets around the half a metre. 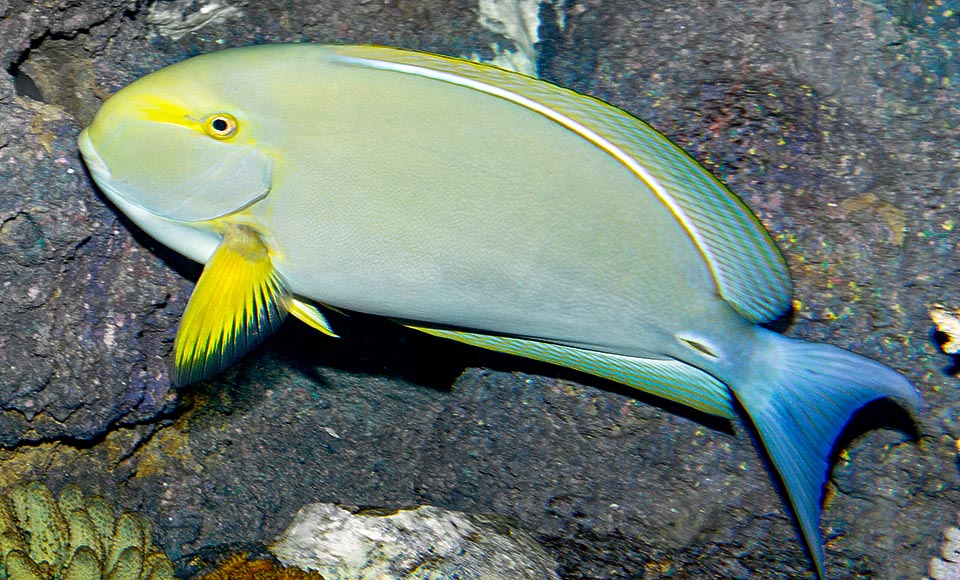 The greyish-reddish background colour may quickly turn grey-bluish-violaceous or grey-golden due to thin and sinuous streaks, 2 scales wide, that alternate on the body with changing skilfully yellowish and greyish shades. The pectoral fins are typically yellow as well as the horizontal trait close to the eye © Giuseppe Mazza

In the adults the jaws have 18 teeth above and 22 below. They are flat, slightly jagged interlocking, in order to cut like a scissors. The blade of the caudal peduncle, of modest size in respect to the body, is evidenced, as often occurs in the Acanthurus by a horizontal black case, edged, for a better emphasis, by a white contour.

The background colour, grey-reddish, may rapidly transform and become clear, depending on the mood of the fish, in a grey-bluish- violaceous or grey-golden, thanks to thin and sinuous streaks, 2 scales wide, that alternate on the body with remarkable yellowish and greyish shades.

The caudal peduncle and the tail, at times separated by a more or less evident whitish band, often show violaceous, at times dark, shades. 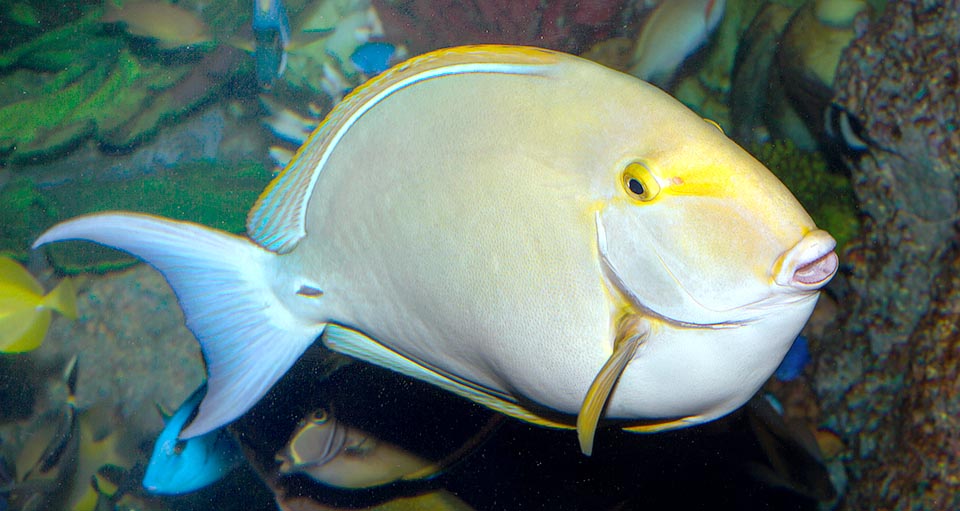 It has a very vast distribution in the tropical Indo-Pacific and can go down, more than any other Acanthurus up to 100-120 m of depth © Giuseppe Mazza

The yellowfin surgeonfish nourishes mainly of filamentous algae, of the film of microscopic algae and sediments covering the sandy bottoms, but also, grazing among the rocks and the corals, of more consistent vegetables, polyps of cnidarians and small invertebrates such as crustaceans, annelids and benthonic molluscs, without forgetting, being a good scavenger, fragments of dead fishes, so much that, unique instance among the surgeonfishes, even takes the bait of the fishermen.

It is therefore an omnivore and not fussy, seen that it follows the schools of carnivorous species, such as the barracudas (Sphyraena forsteri and Sphyraena qenie) and the Caranx sexfasciatus, in order to eat their droppings.

Easy guest, therefore, of the large public aquaria where it may reach the venerable age of 34 years.

The reproduction occurs in group, in the full moon nights, with males in nuptial livery and eggs entrusted to the currents. 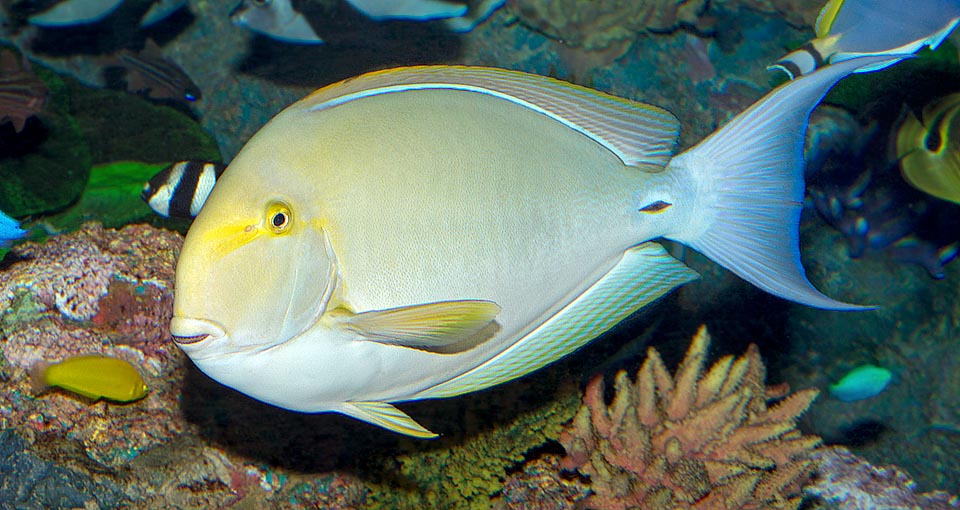 It eats algae, sediments, corals, small benthonic animals and fragments of dead fishes so much that, unique case in the surgeonfishes, it also takes the fishermen bait © Giuseppe Mazza

As it can be easily imagined by its size, Acanthurus xanthopterus is sometimes fished for alimentary purposes. The growth of this species is slow, with a very low resilience, seen that in the best of the cases 4,5 to 14 years are necessary for doubling the populations decimated by the events. The outcome is that, in spite of the immense diffusion of the species, the vulnerability index, presently not worrying, marks 37 on a scale of 100. Excepting the marine reserves, it is protected in Queensland, in Australia, that limits to a maximum of the number of specimens to be fished for pleasure, not to talk of the size that in any case must be over the 25 cm.

It is good in any case to remember that, depending on the zones and the type of feeding, the consumption of the flesh of Acanthurus xanthopterus may cause a serious alimentary intoxication known as ciguatera.