The species is native to Brazil (Espirito Santo and Rio de Janeiro) where it grows at the borders of the forests.

The etymology of the name of the genus is unknown as it has not been specified by the authors; the name of the species is the Latin adjective “azureus, a, um” = azure, with reference to the colour of the flowers.

Sessile opposite leaves, ovate to lanceolate with more or less pointed apex and finely toothed margins, 4-8 cm long and 1-3,5 cm broad, of pale green colour, which, when rubbed, emit a penetrating resinous smell. Solitary flowers at the axil of the leaves concentrated in the terminal part of the branches, with markedly dissimilar sepals, the dorsal 1,2-1,8 cm long and about 0,5 cm broad, the other four 1 cm long and 0,1 cm broad, corolline tube slightly pubescent, curved, 2,5-3,5 cm long, bilabiate corolla violet blue to purple coloured with almost circular lips, 2-3 cm broad, dorsal lip erect, lower one, stretched and trilobed with white spot at the base, and two fertile stamina. 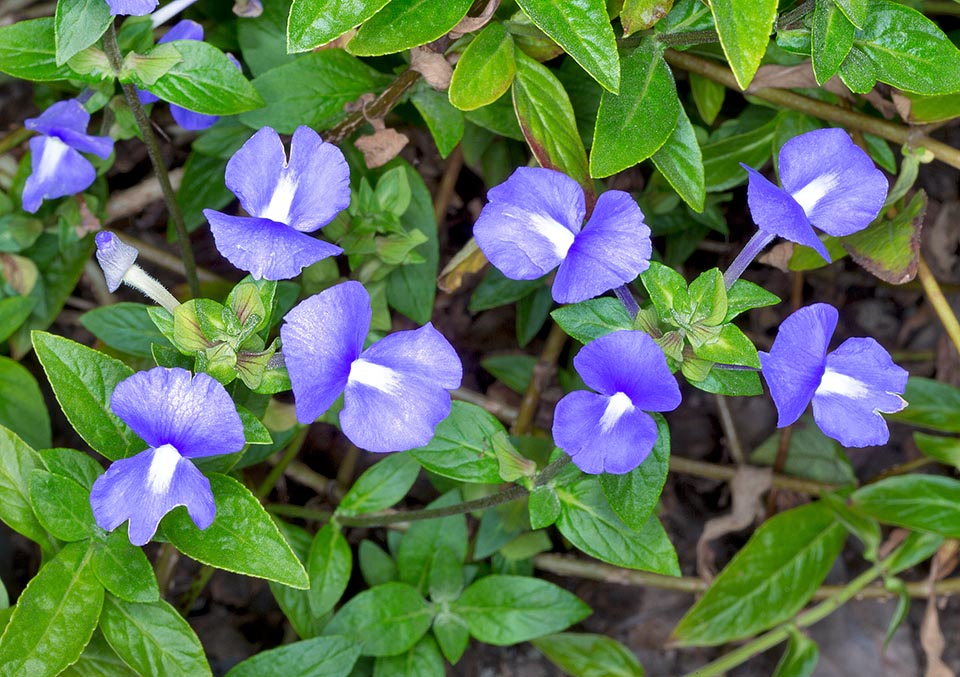 The fruit is an ovoid pubescent capsule with persistent calyx and long pointed apex of 0,7 cm of length and of 0,5 cm of diameter; the seeds are oblong, about 0,5 mm long, brown. It reproduces by seed, in sandy organic loam maintained humid at the temperature of 22-24 °C, and, easily, by cutting.

Still rare species in cultivation which has begun diffusing as ornamental only by the end of the XX century with its synonym Otacanthus caeruleus, appreciated due to the particular and unusual colour of the flowers and the blooming continuing for good part of the year. It is cultivable in full sun or slight shade in the tropical and subtropical climate regions, where it can stand temperatures just below 0 °C only if exceptional and short-lasting, eventually with the loss of the aerial part, utilizable in group as soil cover, for edges and mixed borders. It requires soils rich of organic substance, acidic or neutral, draining, maintained almost constantly humid, even if, well rooted, it may resist to short periods of drought. Elsewhere it can be treated as annual, with blooming from mid-summer to autumn, or cultivated in pot in order to be sheltered in very luminous ambients during the coldest months, with diurnal temperatures of 20-24 °C and nocturnal lowest not under the 15 °C.

The long-lasting, 6-9 days or more, flowery cut branches are utilized for the floral compositions.

→ To appreciate the biodiversity within the PLANTAGINACEAE family please click here.