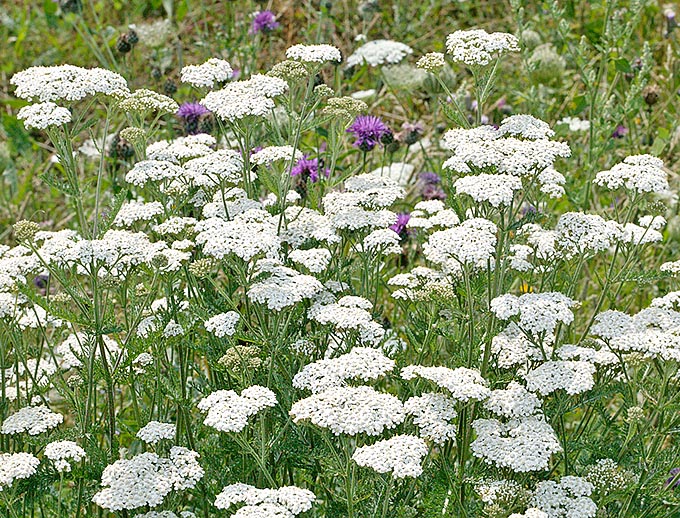 The genus Achillea includes about ninety species; more than 50 of these ones being spontaneously present in Europe. The Yarrow (Achillea millefolium L. 1753) is a species with Circumboreal distribution, which means of the cold and temperate-cold areas of Europe, Asia and North America. Has naturalized in Australia and in New Zealand.

The name “achillea” comes from an old legend, also narrated by Pliny, after which Achilles used to treat the wounds of his companions with leaves of this plant, having learnt about its therapeutic virtues from the centaur Chiron. “Invenisse et Achilles discipulus Chironis qua vulneribus mederetur quae ob id Achilleos vocatur…”. They say that with this plant were cured the wounds sustained in battle by Telephus, king of Mysians (Anatolia, first century before Christ). The name of the species “millefolium” is due to the numerous leaves of this plant but mainly due to the subdivision of the lamina in many and thin laciniae.

The Achillea millefolium belongs to a group of species with a very similar look, for long time considered as a polymorphic entity, then classified in two subspecies with eleven varieties and more recently, after cytogenetic investigations, they have identified several better defined species (and their hybrids) such as morphologic characteristics and habitat (Achillea distans, Achillea striata, Achillea aplenifolia, Achillea collina, Achillea roseo-alba, Achillea pannonica, Achillea setacea). 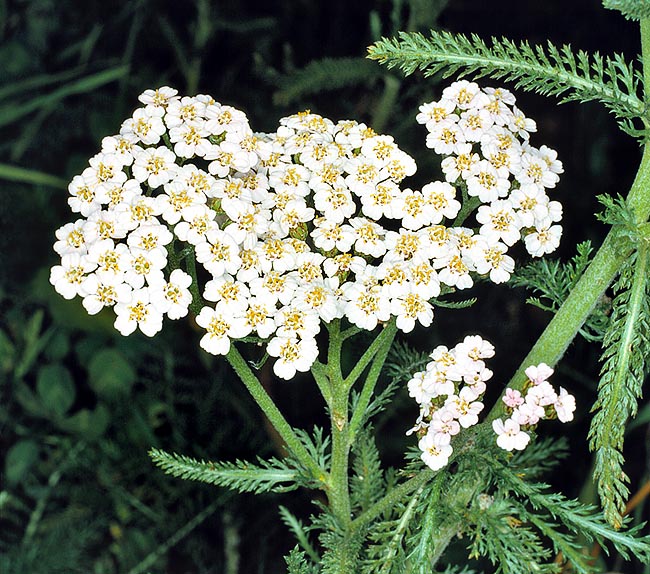 The leaves are lanceolate, narrow, alternate, oblong-lanceolate, bipinnate with linear bi-trifid laciniae, acute and mucronate, the basal ones being cauline, those along the stem in subsessile and sessile on top. The foliar rachis is entire, 0,5-1 mm broad.

The capitula (2,5-3 x 4-5 mm) are grouped in one corymb, have orbicular or ovate ligulae, tridentate, of white or more or less strong pink colour. The flowering is concentrated from May to September. The fruits are 1,8-2 mm long, are flattened, shortly winged and have no pappus. It grows in the dry meadows, in the stable meadows, in the stony pastures, especially mountain and subalpine (0-2200 m).

The numerous and beautiful varieties obtained from this genus of plants, namely from Achillea millefolium, Achillea filipendulina, Achillea nobilis, Achillea ptarmica, Achillea sibirica, Achillea tomentosa, are very much utilized in the gardens for the formation of flowerbeds and edgings. In the past, the yarrows were well seen in the meadows because they were deemed as useful plants for keeping the grazing animals in good health and in the meantime, they said that with their aroma they were keeping away the flies and other annoying insects. The above mentioned species cultivation is fairly simple because they are rustic plants not requiring particular climatic exigencies, they prefer sunny locations and light soils, poor and dry as well as the fertile and fresh ones.

They propagate by division of tufts because the seed germinates very slowly and the young plantules may therefore be stifled by the weeds. They are to be planted shallowly at 30-35 cm of distance, alternated with other species with suitable chromatic flowers in order to create a contrast. 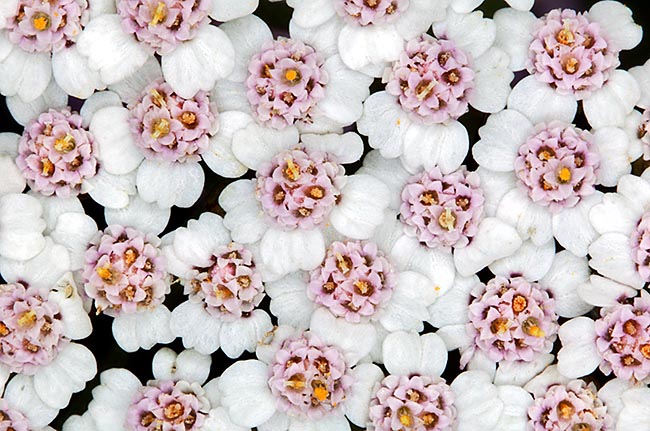 The capitula are merged in one corymb, mostly white, flowering May to September © Giuseppe Mazza

The yarrows are much visited by butterflies and other useful insects. Recently, they have created a wonderful cultivar named “Fuerland” with flowers varying from red (young) to orange (matured) and finally yellow-cream before withering. Excluding Achillea ptarmica which grows well in the wet soils, the other species of the genus employed as ornamental need little irrigation, after the first ones done for favouring the rooting of the tufts. In not optimal soils (heavy ones, badly drained, shady locations), they are at times affected by the rusts (Puccinia millefolii) and fear the attack of aphids and mites.

The flowered tops, harvested in June and dried up preferably in the shade in ventilated locations, contain the glucoside achillein or achillin, achilleic acid, a bitter substance, essential oil with terpenic compounds (cineol, pinene, borneol, caryophyllene and camazulene), camphor, esters of the acetic, isovaleric and formic acids, phytosterin, traces of eugenol, tannins and mucilages, salts of potassium, phosphates, cumarins, tannins, etc. In the flowers there is also propionic acid and in the roots, volatile sulfurated compounds. The yarrow is employed especially as improver of the general conditions of the blood circulation, for accelerating the metabolism, as emmenagogue, eupeptic, anti-gastralgic, spasmolytic-sedative. It is given in powder or in infusion. It betters the general conditions of the circulation, has a positive influence in the digestive and hepatic functions, accelerates the metabolism, it slows the uterine, haemorrhoid, nasal and pulmonary haemorrhages, stimulates the appetite and is recommended for the spring blood depurative treatments. 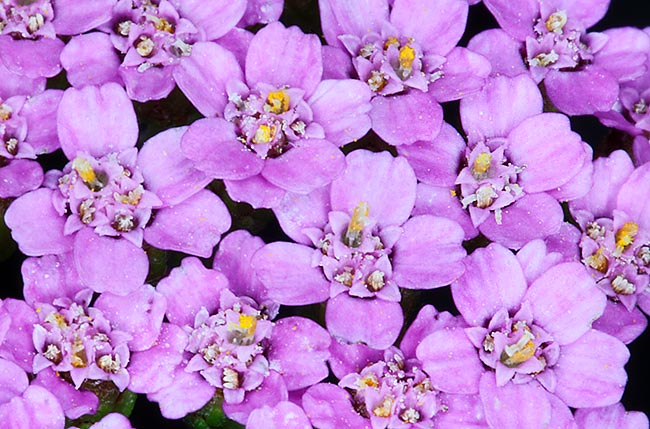 Can have also pink shades. They attract butterflies and keep away annoying insects © Giuseppe Mazza

It is also indicated as bitter-aromatic, slightly anti-inflammatory, antipyretic and hypotensive.

Several botanists and herborists talk about it since the Middle Age in their works and the “sanguinary”, the carpenters’ herb or the “soldier’s woundwort” is still now considered providential on the wounds because it disinfects, heals and stimulates the tissues regeneration.

Another interesting employment which, recently, has given good results in the cosmetics is that of topical preparations for gradually fading the so-called “spots of the old age”, caused by an altered metabolism of the melanocytes.

It is still not clear the mechanism of action and which are the active principles determining its effect: they might be some cyanogenetic glucosides present in the plant or, more probably, some flavonoids having remarkable antioxidant capacities; in this case the flavonoid should cede to the cytoplasm of the melanocyte the quantity of H+ necessary for preventing the oxidation of the thyroxine. Along with other congeners, it enters the composition of the traditional recipes for the production of bitter drinks and digestive liquors and its young leaves are harvested in many places and cooked in omelettes and soups together with other edible herbs and confer a pleasant aroma. In the past in the North-European countries this plant replaced the aromatic hop in the fabricating process of the beer, and in Germany in the XVI century its seeds were placed into the vats for ensuring the conservation of the wine. 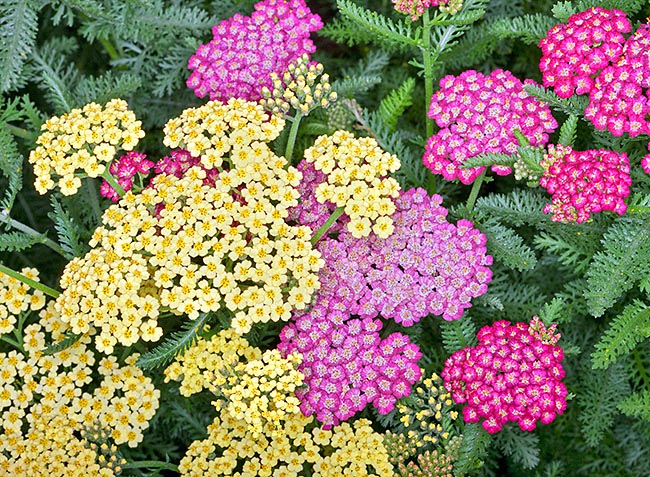 No wonder why it has become a garden plant, with even yellow fancy cultivars © Giuseppe Mazza

Carminative infusion, indicated in the cases of difficult digestion and as calming of abdominal discomforts

One small spoon full of dried flowered tops in a cup of boiling water: leave to infuse for 15 minutes and to drink one hour after the meals sweetening with a spoon of honey.

A handful of dried flowered tops in one litre of dry white wine: leave macerating one week. In order to improve its taste we may add to Achillea millefolium a pinch of fennel or of anis seeds. The whole is to be filtered and drink a small glass after the meals sweetened with honey or sugar.

A handful of dried flowered tops in half a litre of boiling water: to leave in infusion for thirty minutes, and after filtering and squeezing of the residue to apply on the face for twenty minutes by means of cotton wool. The same infusion is useful as lotion to apply on the hairs having seborrhoea and dandruff.