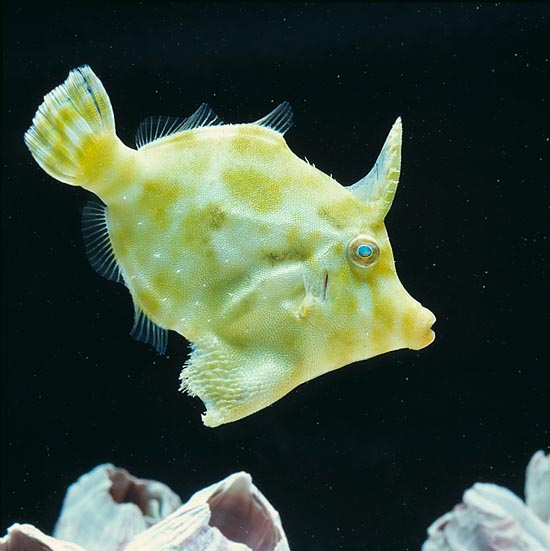 The Bristle-tail file-fish (Acreichthys tomentosus Linnaeus, 1758) belongs to the class of the Actinopterygii, the ray-finned fishes, to the colourful and multiform order of the Tetraodontiformes and to the family of the Monacanthidae, the so-called “file-fishes” due to the roughness of their skin, covered, as in the Balistidae, by bony small plates, which in this family present minute and spaced with one or more spinules.

The name of the genus “acreichthys” comes from the Greek “akros” = high, extreme, extremity, top and from “ichthys” = fish, with reference to the first imposing dorsal fin.

The name of the species “tomentosus” comes from the Latin “tomentum” = wadding, and therefore, wool. It is therefore a woolly fish with reference to the existing hairiness.

It is present in the tropical waters of the eastern Indian Ocean and of the western Pacific. Indicatively, we find it in East Africa, in India, Sri Lanka, Thailand, Australia, Indonesia, New Guinea, Micronesia, Philippines, Taiwan and in China up to the Ryūkyū Islands in the southern part of Japan. Eastwards, it reaches the Fiji Islands, southwards, Tonga.

It lives in small depth, up to a maximum of 15 m, in the coralline lagoons rich of sand, sea weeds and aquatic plants such as the Posidonias. The larvae often develop in the mangroves formations.

It is a shy but curious small fish which doesn’t exceed the 12 cm. The body is flat, covered by the tiny spinosities of the file-fishes, to which are added some small hairs. But, above all, one cannot fail to notice, over the eyes, the great erectile spine the animal spreads with the zone under the chin in horrific posture for defence and for looking bigger. 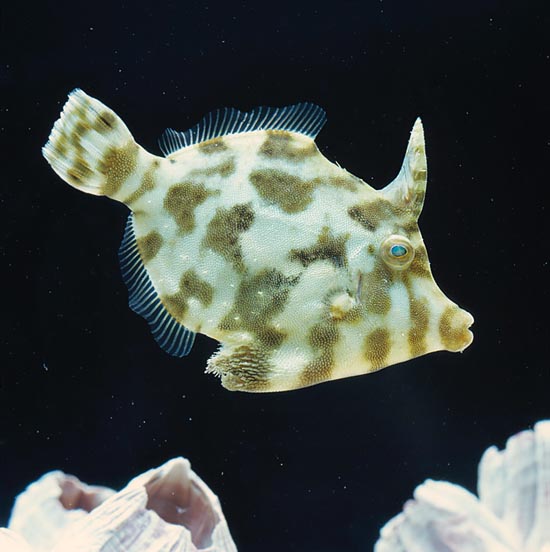 The livery is extremely changeable depending on the mood and the habitat. In most cases, the fish is green for confounding with the plants where it lives, but it can be yellow, like the specimen here shown, grey, white, brown or dark red. More, as these photos do show, it can generate in a few seconds a maculated mimetic pattern. A small sexual dimorphism does exist. The female distinguishes for small details such as the hairiness present on the caudal peduncle, prickly in the males and less rigid but thicker in the females.

The Acreichthys tomentosus eats all what it can find in the crevices of the corals and the seagrasses. Seen its modest size it is content with little: copepods, amphipods, isopods, small gastropods and bivalves, annelids, sponges, tubeworms, eggs of fishes and molluscs, foraminifers and algae. It is clear that with such premises it is easy to feed it in aquarium, where, with a lot of attention, they have even been able to reproduce it.

The female surveys and ventilates with the fins the fecundated eggs until they hatch. The difficult thing stands then in their alimentation with nauplii of Brachionus, copepods and condensed phytoplankton. When three weeks old they already resemble, in smaller scale, to the adults. In nature the populations of the Acreichthys tomentosus can double in 15 months. Thanks to their varied diet, which secures them from the climate changes, and to the fact that practically they are not fished, the fishing vulnerability index of the species stands among the lowest ones: just 16 on a scale of 100.