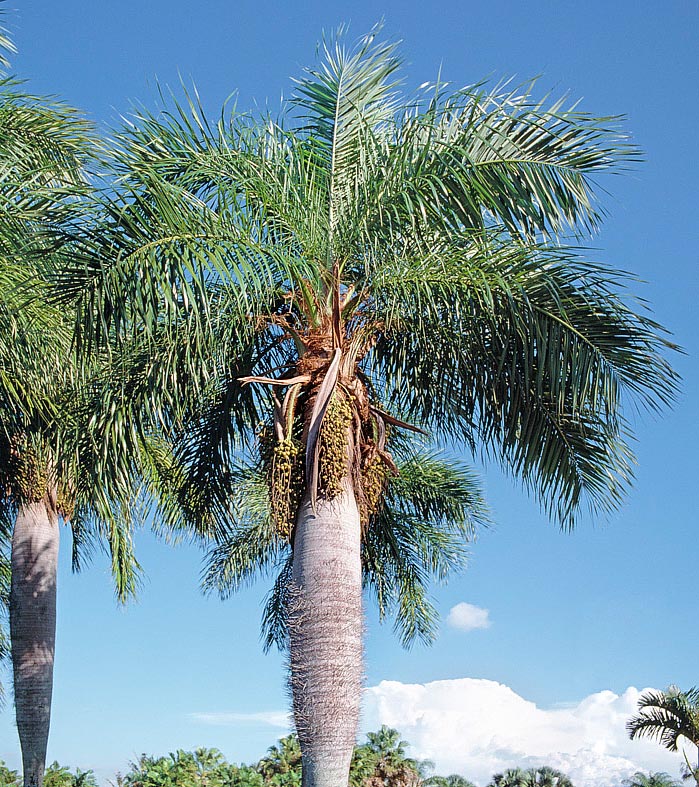 Cuban Acrocomia crispa is recognized at once due its spiny stem, swollen in the median zone © Giuseppe Mazza

The Acrocomia crispa (Kunth) C.F.Baker ex Becc. (1912) is native to Cuba, where is distributed all over the island on calcareous soils.

The name of the genus comes from the composition of the Greek names “akros” = top, summit and “kome” = tuft, hair, with reference to the thick tuft at the summit of the trunk; the name of the species is the Latin name “crispa” = curly, wavy.

The plant is generally known as Gastrococos crispa (Kunth) H.E.Moore (1968), having been only in recent times reintroduced into the genus Acrocomia.

It is locally called “corojo”, whilst in the English speaking countries, is known as “Cuban belly palm”.

Solitary trunk, tall up to about 10 metres, covered by robust black thorns except in the oldest part, rather thin at the base (about 30 cm of diameter), and with a typical, prominent, swelling on the median zone.

The crown is thick, with pinnate leaves, thorny, long 2,5 m, the leaflets, of dark green colour on the upper side, and pale blue-green on the inferior one, are distributed with different angulations on the rachis.

Thorny inflorescences between the leaves carrying yellow flowers of both sexes; the fruits, globose, orange-yellow, of about 2,5 cm of diameter, contain a fairly good quantity of oil utilized for alimentary purposes.

The seeds are notoriously of difficult germination and take usually some months up to one year for germinating. In spite of the widespread presence of the thorns and the slow growth, it is a plant of great ornamental value to be utilized in wide spaces and in full sun, in tropical, subtropical and warm temperate areas; when adult, it bears long periods of drought and lowest temperatures up to -2/-3 °C, for short periods.