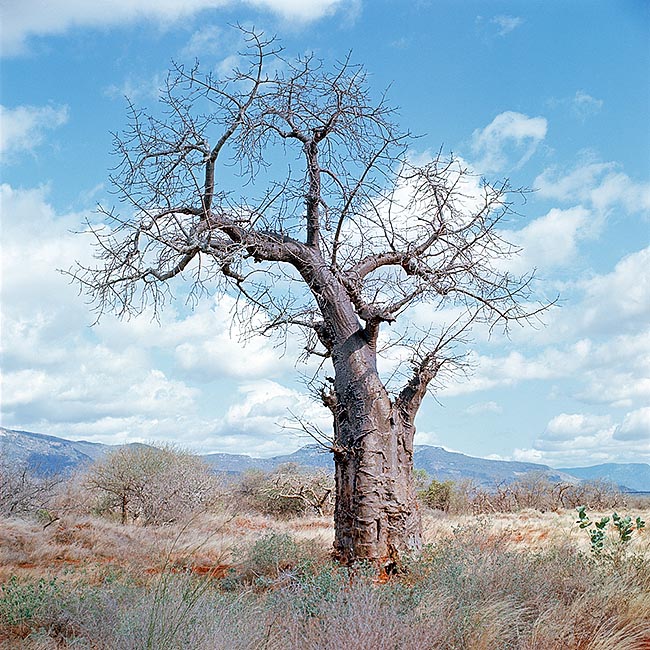 The species is native to Africa (Angola, Benin, Botswana, Burkina Faso, Cameroon, Chad, Democratic Republic of the Congo, Ethiopia, Ghana, Guinea, Ivory Coast, Kenya, Malawi, Mali, Mozambique, Namibia, Niger, Senegal, Sierra Leone, South Africa, Sudan, Tanzania, Togo and Zimbabwe) and Madagascar, where it grows mainly in the arid to sub-humid savannahs, with 2 to 6 months rain season and annual average temperatures from 20 to 30 °C, from the sea level up to about 1500 m of altitude.

The genus is honoured to the French naturalist Michel Adanson (1727-1806); the specific name is the Latin adjective “digitatus, a, um”= equipped with fingers, with reference to the shape of the leaf.

The Adansonia digitata L. (1753) is an up to 25 m tall tree with massive cylindrical or characteristically bottle-shaped trunk, that may reach the 10 m of diameter, and branches irregularly distributed along the trunk or concentrated at the apex. The bark is smooth and fibrous, grey to reddish brown with a thin photosinthetyc green layer under the surface. 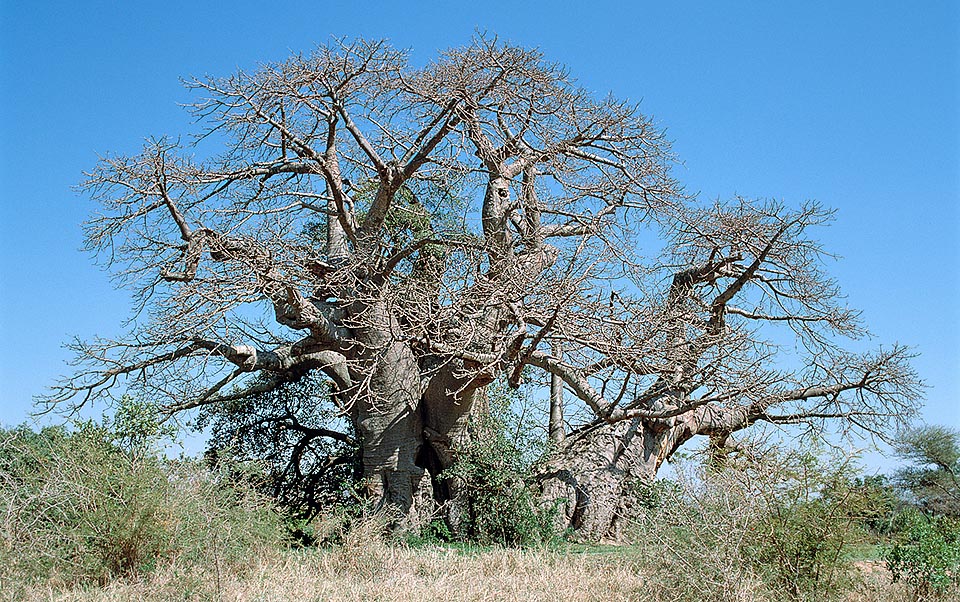 The leaves on an up to 12 cm long petiole, are alternate, grouped at the extremity of the branches, palmate-compound, those in early season with 2-3 leaflets, the following ones with 5-7, rarely 9, elliptic or elliptic-obovate with entire or slightly toothed margin, of quite variable dimensions, 5-14 cm long and 2-5 cm broad, of dark green colour. 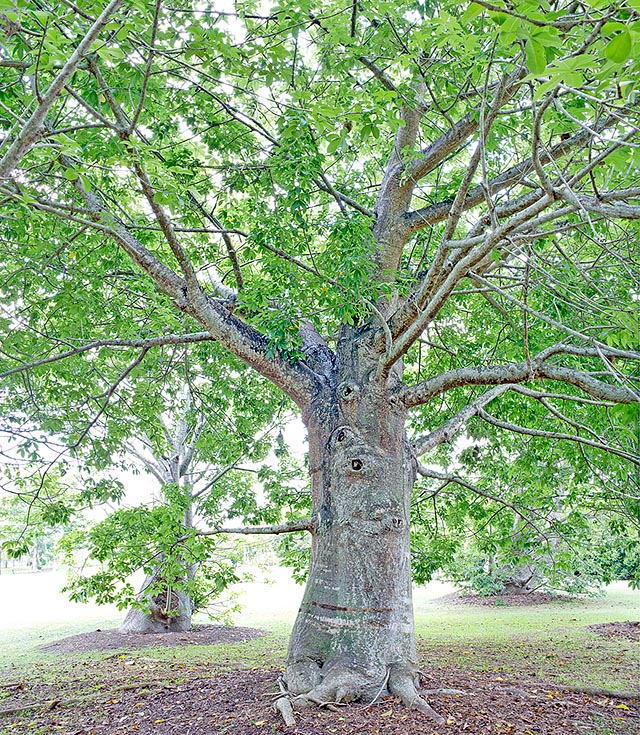 The palmate compound leaves are very variable with more elements at the vegetative season peak. The young ones, rich of proteins, minerals and vitamin A, are eaten cooked as vegetables by local populations © G. Mazza

Thick and numerous stamina, merged at the base for about half of the length forming a 3-5 cm long tube surrounding the white style that exceeds the anthers of 1-2 cm; stigma with 5-10 fimbriate lobes.

Flowers do open by late afternoon and begin to close the following morning and are pollinated mainly by bats attracted by the smell of the nectar excreted by the glandular hairs placed at the base of the sepals.

The fruits are indehiscent capsules of variable shape, globose to oblong, 10-35 cm long and of 7-15 cm of diameter, covered by a thick and short yellowish down, with woody pericarp, about 1 cm thick, and floury pulp where are dispersed the laterally flattened reniform seeds, 1-1,3 cm long, 0,8-1 cm broad and about 0,4 cm of thickness, of dark brown colour.

It reproduces by seed, previously mechanically or chemically (through immersion in sulphuric acid solution for some hours) scarified in order to damage the hard outer tegument, utilizing at least 20 cm deep containers and draining loam formed for the 60% of garden earth plus sand and organic substance in equal parts, with germination times from 10 to 30 days and first blooming starting from the 10 years. 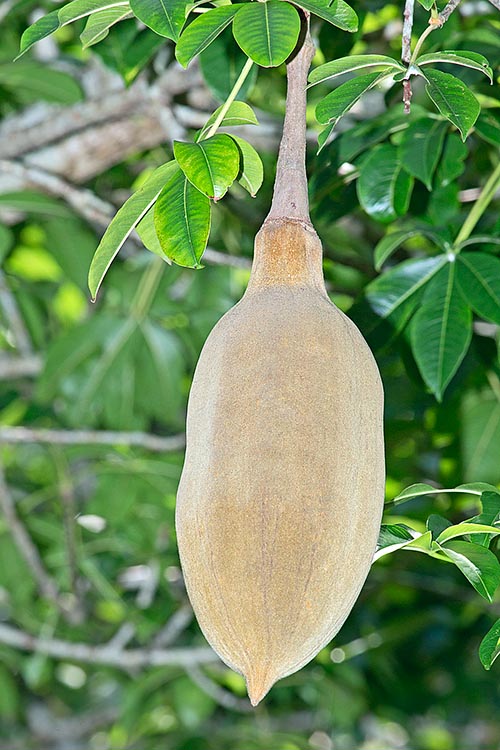 The 10-35 cm long fruit contains a floury edible pulp rich of vitamin C. Also the seeds are edible and all parts of the plant have many known medicinal virtues © G. Mazza

It reproduces also by preferably apical cutting, about 10 cm long, deprived of the leaves, but the two upper ones cut in half to limit the evapotranspiration, and by grafting.

Imposing tree, fast growing when young, requires tropical or subtropical climates with warm and humid summers and dry winters, with lowest temperature values over the 5 °C and full sun exposition.

It grows in an ample variety of soils, even poor and stony, provided deep and draining, not bearing water stagnations, and is particularly resistant to drought, thanks to the water stored in the trunk, and to the fire.

The baobab is an important source of food for the local populations, the young leaves, rich of proteins, minerals and vitamin A, are consumed cooked like vegetables or dried to prepare sauces or to add to the boiled rice, are also used in the animal feeding.

The yellowish white pulp, floury and slightly sourish, with the highest contents of vitamin C present in a fruit, is consumed dissolved in warm as well cold drinks, added in ice-creams and jams or used as leavening agent. The seeds, freed of the hard outer layer, rich of proteins and with a contents of oil of around the 15%, are consumed fresh, roasted, dried or ground, often added to the soups as thickener.

The fibres gotten from the bark are employed, due to their robustness, to realize ropes, nets, bags, mats and other commonly used objects, the woody epicarp of the fruit, variously decorated, is used for handcrafted items, finally, from the roots they get a red dye.

All parts of the plant are amply utilized in the traditional African medicine for various pathologies, in particular the leaves, the pulp of the fruit and especially the bark are utilized as antipyretic and the pulp against diarrhea and dysentery; in India, where since long ago it has naturalized, is especially used the radical bark. Finally, the tree also holds mythical and religious significances for many local populations and stands at the centre of numerous legends handed down through generations.