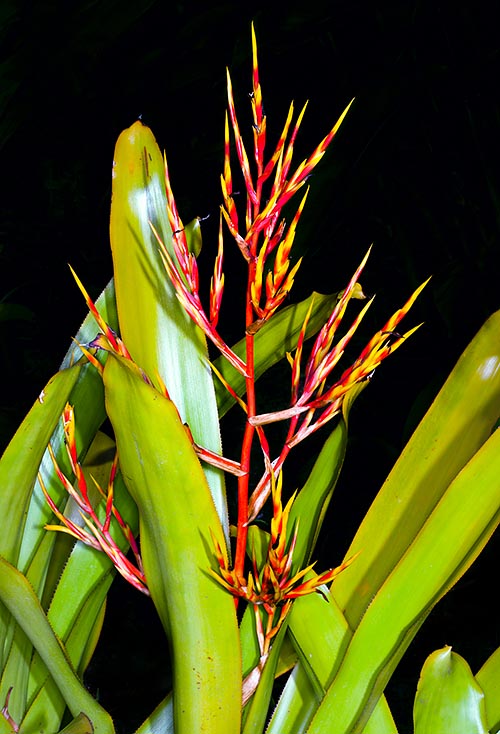 The name of the genus comes from the Greek “aichme” = spearhead, with reference to the thorny apices of the sepals and of the floral bracts; the species is honoured to its discoverer, Jacques S. Blanchet.

The Aechmea blanchetiana (Baker) L.B.Sm. (1955) is an evergreen herbaceous species, monocarpic (fructifies once only and then dies), acaulous, epiphytic or terrestrial, it has a funnel-shaped rosette of several leaves placed in way to form a central cavity usually full of water. The leaves are pointed, curved, 0,4-1 m long, with thorny margins and apex, of green colour turning reddish orange when exposed in full sun.

The inflorescence, at the centre of the rosette, up to more than 1,5 m long, is formed by a floral scape ending in a compound raceme, that is, formed by more racemes departing from a central axis, with tiny flowers surrounded by showy bracts, pointed and of red and yellow colour. The fruits are globose berries containing elliptic seeds about 2 mm long. It reproduces, besides by seed, in vegetative way through the new plants coming out at the base and which may be detached when they have reached a size of at least one third of that of the mother plant.

Of great ornamental and landscaping value, thanks to the particularly coloured leaves and the inflorescences persisting for many months, it is one of the bromeliads more utilized in the tropical and subtropical countries in mass and as soil cover or epiphytic on the trees. Its best position, on the ornamental point of view, is in the “desertic” gardens, also close to the sea, as it can bear an intense solar radiation, poor availability of water and marine aerosols; dry, it can stand temperatures just under the 0 °C, in these conditions it resists better if sheltered from the winter rains seen that the combined action of the humidity and of the low temperatures renders it more sensible to the rottenness. It requires a particularly draining soil, preferably sandy, and an exposition in full sun for a more intense colouration, it can grow also in the shade, but the leaves become green and rather soft and flabby. In summer, waterings and fertilizations are to be done with moderation, an excess of them, in fact, tends to cause the loss of the particular colouration of the leaves.

It can be cultivated in pot, even if small as it has a limited rooting apparatus, with much aerated substratum, light, draining and rich in organic substance with addition of siliceous coarse sand. In summer, some water may be left in the central cavity formed by the leaves rosette, renewing it frequently in order to avoid the creation of a mosquitoes larval nest, whilst in winter it is better to leave it fairly dry, if in presence of low temperatures, for avoiding possible rottenness. The cut inflorescence lasts about one month and is often used in the floral compositions.