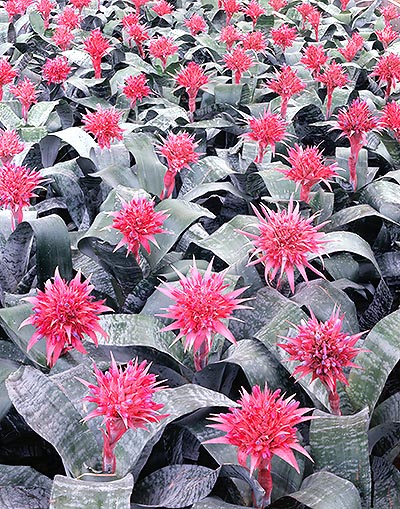 The Aechmea fasciata (Lindl.) Baker (1879) is native to the pluvial forests of the state of Rio de Janeiro (Brazil), where it grows between the 500 and 1200 m of altitude.

The name of the genus comes from the Greek “aichme” = spearhead, with reference to the thorny apices of the sepals and of the floral bracts; the Latin name of the species, “fasciata” = striped, refers to the horizontal stripes on the leaves.

Evergreen herbaceous plant, monocarpic (bearing fruit only one time during its existence), acaulescent, epiphyte, it has a tubular or funnel-shaped rosette of elegantly curved leaves placed in way to form a central cavity, usually full of water. The leaves, green grey coloured due to the presence of microscopic grey scales spread uniformly or at bands, and provided by the edges with about 4 mm long brown thorns, are linear and long up to about 60 cm and 6-8 cm broad, with rounded apex, but provided with an about 4 mm long thorn.

The inflorescence, at the centre of the rosette, is formed by an about 40 cm long, reddish brown, floral scape, covered by a thick white tomentum and provided of bracts with thorny edges which, at the base of the scape, are of a greenish-white to pale pink colour, about 5 cm long and 10-15 mm broad, whilst in the upper part, at the base of the inflorescence, they are wrapping, 7-9 cm long and 10-20 mm broad, of a pink colour. The scape ends in a thick, pyramidal, long lasting – even six months – inflorescence, formed by a compound raceme, that is, formed by several racemes departing from a central axis.

The bracts under the single racemes, of the same colour as the terminal ones of the scape, are longer than the clusters of the flowers, whilst those of the single flowers are triangular, sharp and thorny at the margins, 4-5 cm long, of the same pink colour and covered by a thin white tomentum. The flowers have pink or white sepals with a thin white tomentum, 10 mm long and broad, at the base, about 3 mm, with a rounded apex, and 3 cm long petals, of blue colour, turning to pink by the end of the blossoming. The flowers are self sterile, therefore the pollen of another plant is necessary for getting fruits; the same are small globular berries covered by a white tomentum, which ripen in 8-9 months and containing fusiform, about 2 mm long, seeds.

It reproduces easily by seed, to be distributed on the surface of a fibrous substratum, kept constantly humid, and by vegetative way, through the new plants which originate at the base of the plant and which can be detached when they have reached the size of at least one third of the mother plant; starting from the seed, 5-6 years are needed for the blossoming, whilst at least 3 years are needed by division. The wide scale reproduction for commercial purposes is done by micro-propagation. The plant is one of the most popular and known ornamental bromeliads due to the beauty of the foliage and of the inflorescence and the facility of cultivation. Introduced in Europe – more precisely in Belgium – in 1826, it has become in a few tens of years, the most cultivated and appreciated bromeliad for indoor decoration and still nowadays it covers a major role in this field.

The plant is long-day and therefore its blooming can be easily programmed for every moment of the year by varying in special greenhouses the length of darkness and light. The Aechmea fasciata is cultivated in open air in the tropical and humid subtropical climate countries, both as epiphyte and as terrestrial, on very aerated, porous, draining and rich of organic substance substrata, preferably in slightly shaded position, even if it stands the full sun.

The open air cultivation in the climates warm temperate can be tried, as it bears, for very short time, temperatures as low as -2/-3°C, even if with damage to the foliage, in these situations it will better resist if sheltered by the winter rains, seen that the humidity and low temperatures render it more sensitive to rottenness. When in pot for indoor decoration, on substrata with the same characteristics foreseen for outer spaces cultivation, is to be placed in a very luminous position with temperatures which it is good to keep over the 14°C, best 20-24°C.

Watering must be regular in summer, but allowing the substratum to dry up before watering again, and reduced in winter and the local humidity, in presence of dry air and high temperatures, can be increased with nebulisations utilizing water at room temperature and not calcareous, in order to avoid anti-aestethic dots on the leaves. In summer, some water can be left in the central cavity formed by the rosette of leaves, renewing it frequently to avoid the formation of a mosquito larvae nest, whilst in winter it is better to leave it dry, thus avoiding possible rottenness.

Usually the plant is put on sale with the flowers and the new vegetations which originate at the base of the mother plant will not reach, as said, the maturity for blossoming, by their turn, before three years, but even then, due to the peculiar variability and the little favourable habitat conditions of the apartments, will seldom bloom; a system available to all for obviating to this is to hood the plant with a transparent plastic film and place at the base one-two cut apples (the ripe fruit, particularly the apple, develops ethylene, hormone, which, as said other times, facilitates the blossoming of the pineapple), for about three weeks, after six-eight weeks, if the plant is already mature, the blossoming should begin.