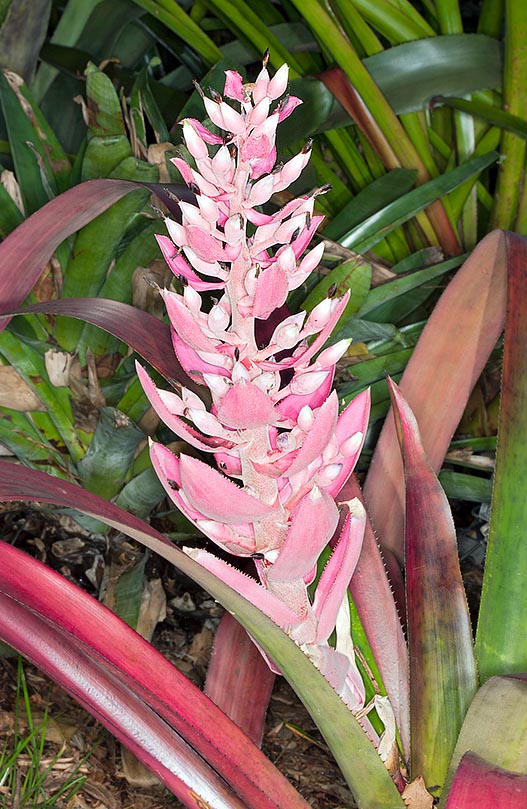 The species is native to Colombia, Ecuador and Peru, where it grows, epiphytic, in the humid forests at low altitudes.

The name of the genus comes from the Greek “aichme” = spearhead, with reference to the spiny apices of the sepals and of the floral bracts; the species is honoured to its discoverer, the Russian botanist Georg Jurij Nikolajevich Woronow (1874-1931).

The Aechmea woronowii Harms (1930) is an evergreen herbaceous species, monocarpic (it fructifies only once then dies), acaulescent, epiphytic, it has a funnel-shaped rosette of ascending leaves placed in way to form a central cavity usually full of water. The leaves, 1-1,5 m long and up to about 7 cm broad, are lanceolate with pointed apex and thorny margins, covered by tiny white scales.

The 30-40 cm long inflorescence, at the centre of the rosette, is formed by a robust floral scape, covered by microscopic scales and by a whitish floury powder, provided with elliptic bracts with pointed apex and thorny at the margins, up to 15 cm long, rather chartaceous, of pink colour. The scape ends with an about 25 cm long inflorescence formed by a compound raceme, formed by several racemes which depart from a central axis, formed by ovate floral bracts with acuminate apex of pink colour from which protrude the flowers with oblong ovary of 1,5 cm of length.

Whilst the flowers are ephemeral, the floral axis, bracts and sepals last many months, and the last ones become, in the course of time, of blue colour. The fruit is a berry containing numerous tiny seeds. It reproduces, besides by seed, by vegetative means through the new plants coming out at the base of the plant and which may be taken off when they have reached a size of at least one third of that of the mother plant. Little diffused species, in spite of the undoubtedly ornamental characteristics, it is cultivable in open spaces in the tropical and humid subtropical climates as epiphyte on the trees, but also as terrestrial, to form borders and flower beds, on much aerated substrata, porous, draining and rich of organic substance, in full sun or slight shade.

Elsewhere, it is to be cultivated in pot on substrata having the same characteristics as for the outdoor cultivation, with lowest winter temperatures over the 14 °C. The substratum must be kept constantly humid in summer, slightly in winter, allowing the substratum to dry up between the waterings, and the ambient humidity, in presence of dry air and high temperatures, can be incremented with nebulisations by utilizing water at ambient temperature and not calcareous in order to avoid unaesthetic speckles on the leaves. In summer, some water can be left in the central cavity formed by the rosette of leaves, renewing the same frequently in order to avoid that it becomes a larval home for mosquito, whilst in winter it is better to leave it dry in order to avoid possible rottenness.