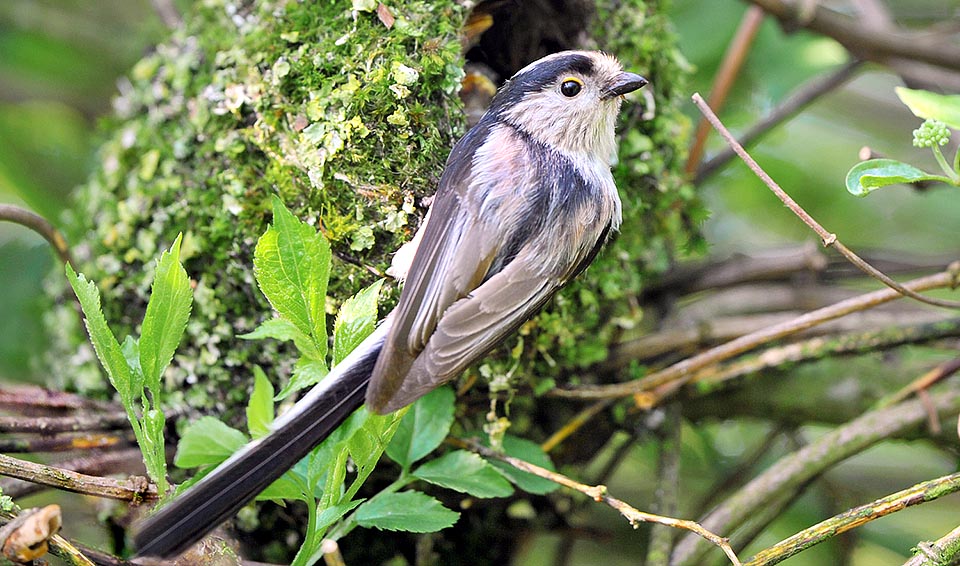 Frequent in temperate Eurasia, all long-tailed tits (Aegithalos causatus) starting from February-March are quite busy in building the nest © Gianfranco Colombo

Sometimes it is difficult to give a logical explanation to the reason why the nature has given an animal a morphological particular that at times appears to be an obstacle to the regular execution of its daily life. It is clear that the colours of the livery do have their own meaning when held by the male, as well as sharp claws reveal the fulfillment of a predatory necessity. 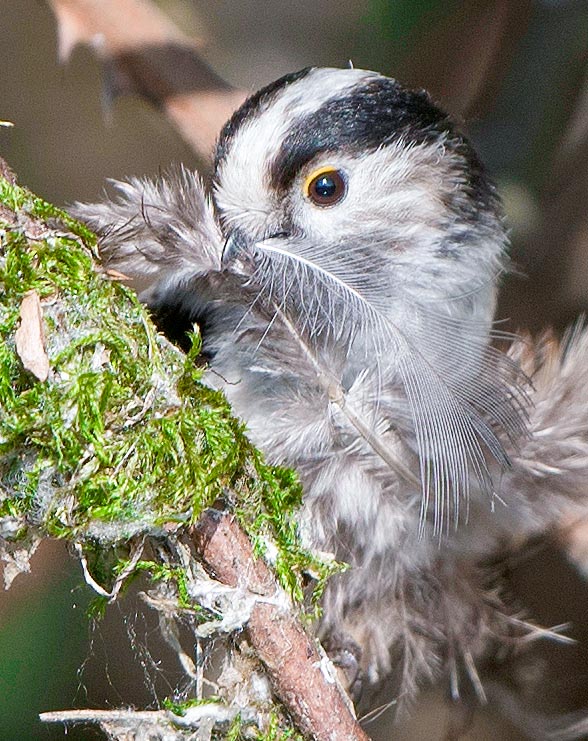 We know that particular beaks evidence specializations in feeding and strong and appropriately shaped wings characterize an adaptation to the migrations.

But why such a disproportionate tail in the long-tailed tit? Beauty, elegance, necessity? Not at all!

The male as well as the female have it of the same size clarifying immediately that it does not belong to the courtship kit of the male.

As we shall see, the tail of this bird is surely disproportionate for its dimensions and such to appear difficult to drag during the flight and maybe also a hindrance during its continuous toddling among the shrubs, climbers and brambles where it spends most of its time.

Then, why to give also the female this appendage, obliging it then to brood in a narrow, nest, small and shaped like an egg, absolutely unsuitable to host birds so much tailed?

It is curious to note that the simplest way to understand if a female of long-tailed tit is already brooding is to observe its tail that appears crooked, crumpled with unnatural curvatures, rightly because inside the brooding chamber there is not enough space for keeping it extended.

The Long-tailed tit, also known as long-tailed bushtit (Aegithalos caudatus Linnaeus, 1758), is one of the smallest membres of the order of the Passeriformes and belongs to the family of the Aegithalidae a new group often included in the family of the Paridae, the common tits, with whom has remarkable behavioural and morphological similarities.

The Italian vulgar name of “codibugnolo” is of Tuscan popular origin and greatly combines the particular tail with the “bugnolo”, an ample wicker basket used for containing cereals or bread. Hence, the tail is so much big that a wicker basket is needed to contain it. 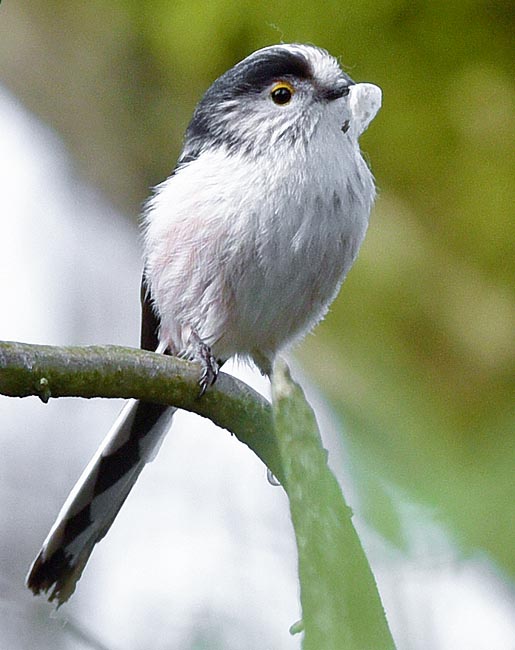 The scientific name has been taken from the Greek term given by Aristotle to some tits that he had rightly called “aigithalos”, without making a clear distinction whilst “caudatus” comes from the Latin with the meaning of tailed, rightly for the long appendage.

In Europe it is commonly called: in English, Long-tailed tit; in German, Schwanmeise; in Spanish, Mito Común; in Portuguese, Chapim-rabilongo, in Italian, Codibugnolo or Cincia codona and in French, Mésange à longue queue.

The long-tailed tit has a very vast range going from the European Atlantic coasts up to the Pacific ones through the whole Asian continent.

It is only absent in the cold areas of the two continents where the winter climate conditions do not allow the survival of this very small bird.

Southwards, the range stops in some Mediterranean islands whilst in Asia it gets to touch the arid and steppe territories of the southern sector avoiding absolutely the Indian subcontinent and south-eastern Asia.

It is absent in Sardinia and in some lesser islands of the Mediterranean but occupies totally the Iberian Peninsula, the Balkan one and the Middle East.

The long-tailed tit lives mainly in woody mountainous as well as in plain zones, with thick shrubs, brambles and fences with climbers but preferably choosing the areas bordering open and well sunny spaces.

In the plains it loves a lot to frequent the small riparian thickets along the rivers or also the ditches that cross vast rural areas. It is a practically sedentary bird in most ranges, showing a genetic attachment to the native place such as to make it spend the whole life always in the same places. 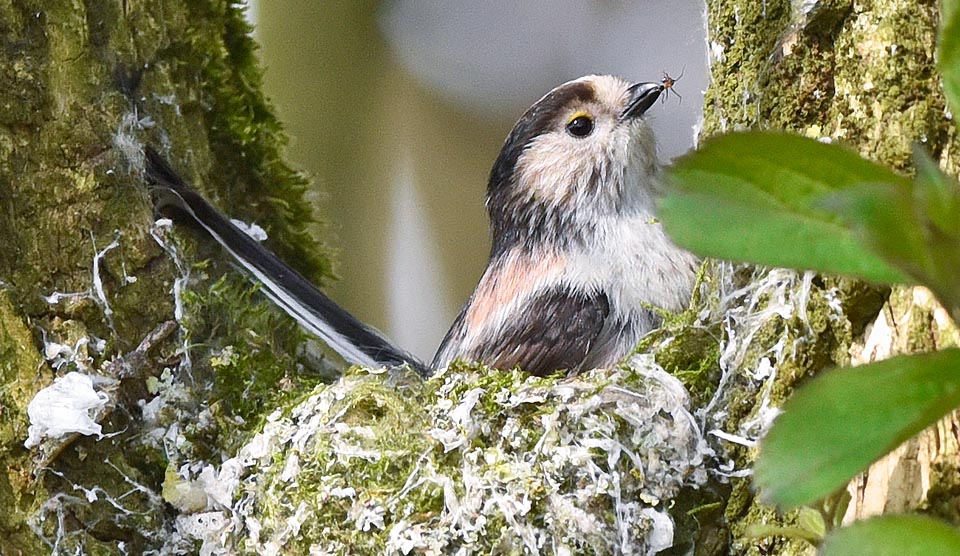 Huge job for these 7-9 g and 6 cm, tail excluded, small birds that in only 15-20 days, piecemeal, must merge them, using sticky webs and as glue, like in this photo, insects chrysalises, cottony flaks, mosses and lichens to create a flexible, soft structure well anchored to the support © Gianfranco Colombo

For the populations of the extreme north we see even considerable latitudinal movements due to the difficulty of this bird in overcoming rigid temperatures for long periods. In fact also in the zones where it is traditionally sedentary, may take place real reductions during the winter, when suddenly and for long periods occur intense colds. 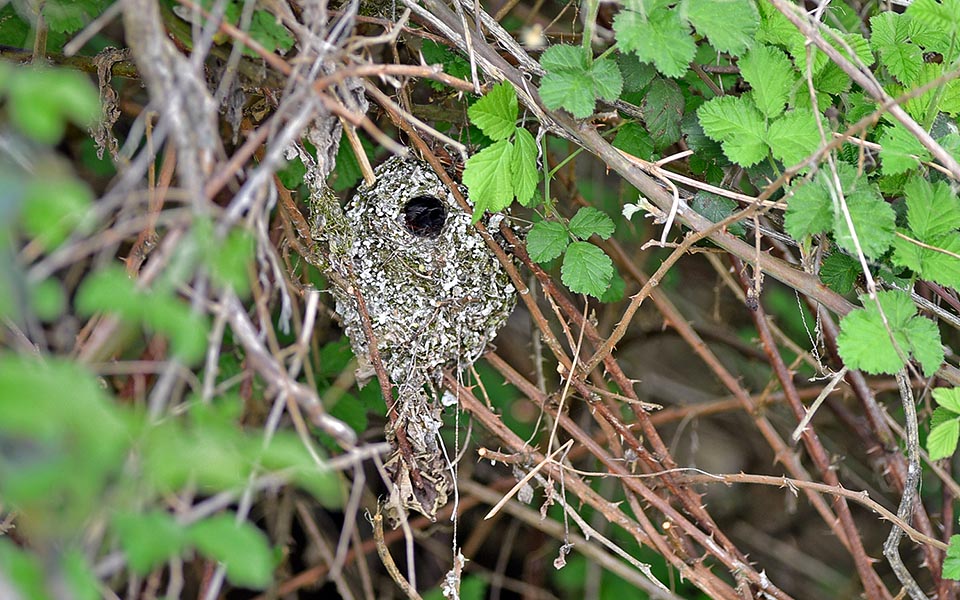 Here finally the typical nest along briars: an egg-shaped structure, about 20 cm tall and 12 broad, with a small and narrow hole laterally on the upper part © G. Colombo

During the winter period it can be met in any environment even urban when, together with consimilars and the cousins tits, it creates significant bands that fly from branch to branch looking for the few insects that survive during the bad season. An always moving small bird, unflagging and sprightly with its insistent srrr srrr, an almost trilling appeal that emits continuously in order to maintain the contact with the group. 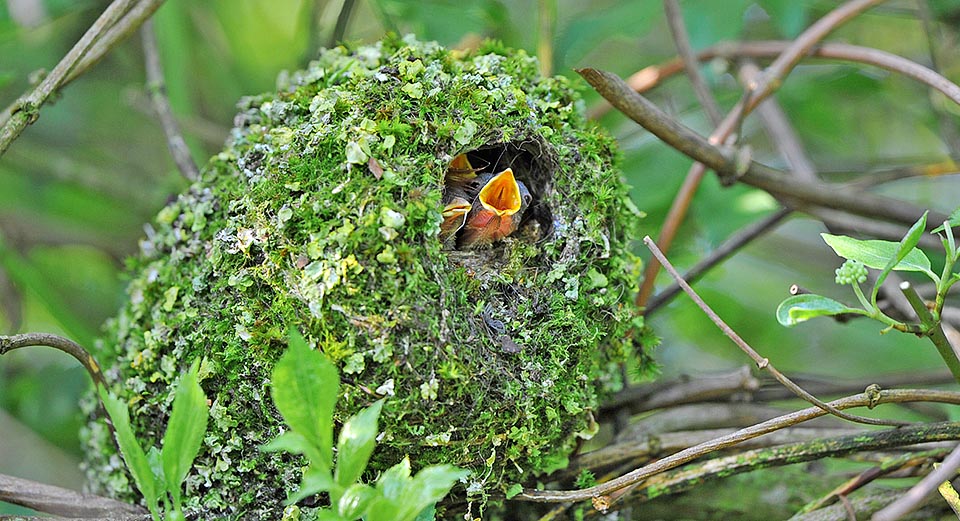 Chiks begging for food. 8-12 eggs are laid, one per day, and the female broods for about two weeks © Gianfranco Colombo

The long-tailed tit has extremely reduced dimensions to make it standing among the smallest European birds. It has an average weight of 7 g that occasionally may reach the 9 in late autumn; a wingspan of 15/17 cm and a length of 14 cm, of which 8-9 cm of the tail only. Then an appendage covering even the 65% of its body. Male and female are indistinguishable and also the chicks wear the adults livery already since the end of the first year. 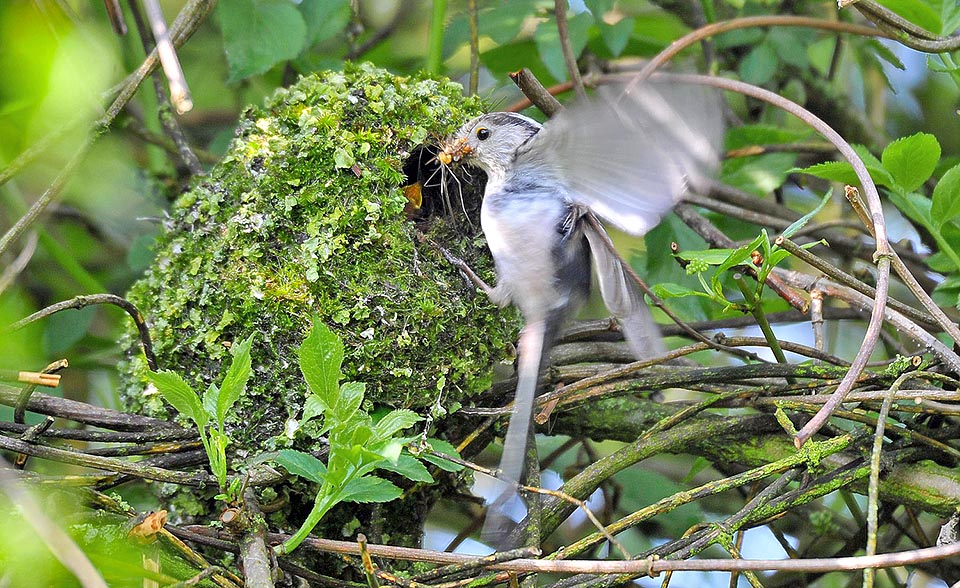 Parent full of gifts. The basic diet is of small spiders and insects, with relevant eggs and chrysalises, at times completed by seeds and berries in the bad season © Colombo

The basic colour is the white with blackish streaks covering the wings, head and back. The chest and the belly is totally white whilst the tail has black feathers with the external ones white. In some subspecies there are also pink and greyish shades on the back. It has a very small beak, triangular, little prominent and almost invisible, of black colour like the legs. 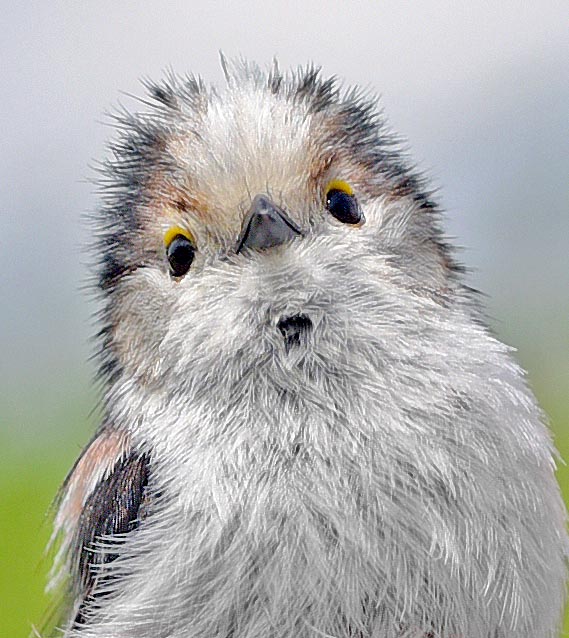 Besides the trilling calls, the long-tailed tits communicate with look and feathers movements © Gianfranco Colombo

From these three stocks have been classified about twenty subspecies, specific to territories at times very limited but of not easy identification on the field if not through the direct handling of the specimens collected during the ringings.

The long-tailed tit is a monogamous species and nidifies only once a year. It is a rather precocious species and often already by late February, early March, we can observe the first signs for the construction of the nest. It usually loves to build it in briars, low bushes or hidden among ivies and creepers that wrap the stem of elders, locust trees and broad leaved trees but does not disdain to build it completely into the open on the bifurcation of the trunk of a tree, relying on the colour of the material used that well will camouflage itself with the bark. The height where the nest is placed is not constant, it may in the occasion to be at few decimetres from the ground, even on the bank of a water stream drooping on the surface but usually it does not exceed the three metres of height. 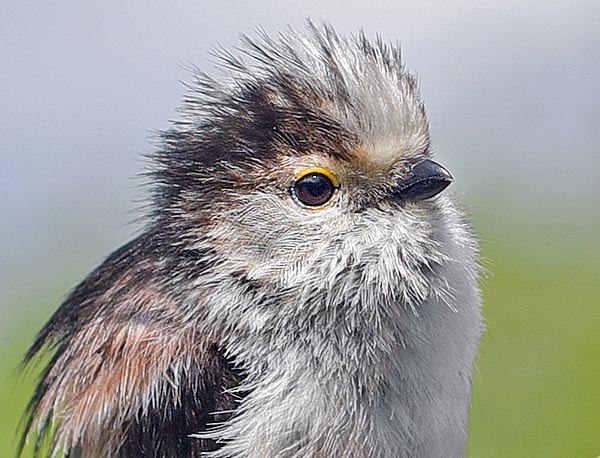 Particularly, when nervous, they raise the head feathers like the tit © Gianfranco Colombo

The construction of the nest of the long-tailed tit is one of the longest and most complicate operations for a bird, even more burdened by the very reduced size of the architect and of the enormous quantity of material it must carry for completing such exceptional task.

Chosen the site where to build the nest, both partners begin putting a base formed by moss bound and stuck piecemeal with sticky webs that they mix to flakes of vegetal cotton, to lichens, to small insects chrysalises with a painstacking and innate skill.

Piecemeal in about 15/20 days of unceasing work, an egg-shaped structure is built about 20 cm tall and 12 cm broad with a small and narrow hole placed laterally on the upper part. The structure is very light, much flexible, soft and well anchored, nay practically stuck to the support on which it is built.

The interior is then lined with small feathers of every colour, very soft and collected God knows where that render the interior a real alcove.

It has been established that the collection and the transportation of the material for building the outer structure, implies several thousands of travels for both partners and not less that some hundreds for the inner furnishing.8 to 12 days are laid at the rate of one a day and the brooding, done by the female only, lasts about two weeks. The young abandon the nest after about two weeks. 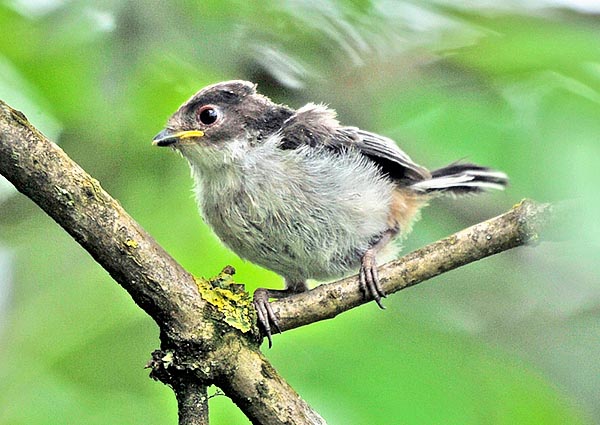 When two weeks old the young Aegithalos caudatus leave the nest and can already fly, but the life of a long-tailed tit is short: averagely, all going well, they hardly reach the 3 years © Gianfranco Colombo

The nest of the long-tailed tit has a very high predation leading to the destruction of about the 80% of the nests. Crows and corvids, raptors and mice, grass snales and bad weather, are often the cause of these accidents.

When this happens, usually the couple renounces to a substitutive nesting, preferring to employ their experience and their wish of proliferation, in helping other couples nidifying nearby. In fact, it is not rare to see more adults feeding the chicks at the same nest.

The long-tailed tit nourishes mainly of insects and of their eggs, of small chrysalises and spiders during the summer as well as in winter, even if during the bad season it completes its diet with seeds, berries and fruits accidentally remained on the trees.

The necessity to live in groups during this period, reaches the primary purpose during the night, when all participants gather close and crowded on the same support, leaning against the trunk or a thick shrub to protect themselves from the bitter cold. A shapeless heap of feathers that avoids the dispersion of body heat. So far and so different but so similar in the behavior to the Emperor penguin (Aptenodytes forsteri) who in Antarctica implements the same artifice. 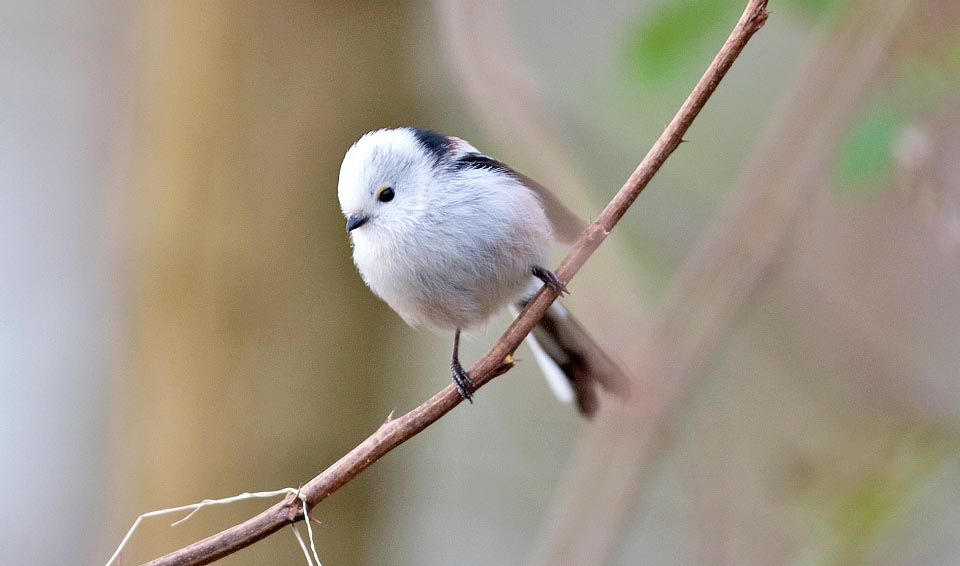 Their life is quite short seen that as an average they barely exceed the third year of age.