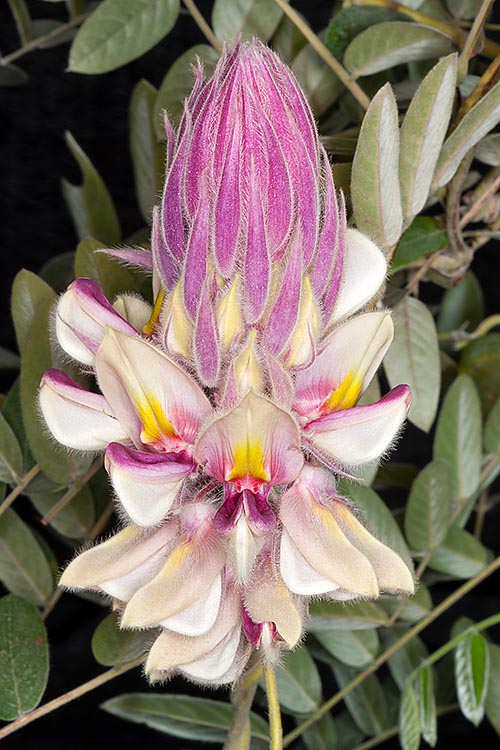 The species is native to north-eastern Thailand where it grows at the margins of the deciduous forests, between the 200 and the 600 m of altitude.

“Afgekia” is the acronym of the Irish physician Arthur Francis George Kerr (1877-1942) who first devoted himself to the study of the Thailand’s flora and picket its samples; the name of the species if the Latin adjective “sericeus, a, um” = sericeous, silken, with reference to the silky look of all the parts of the plant.

The Afgekia sericea Craib (1927) is an evergreen, perennial woody climber with up to 10 m long stems in presence of supports and alternate odd-pinnate leaves with 13-19 elliptic leaflets with pointed apex and entire margin, 6-8 cm long and 2-3 cm broad, pubescent; the young leaves have silvery reflections.

Racemose, terminal, up to 60 cm long inflorescences, with 200-400 papilionaceous flowers opening in succession from the bottom upwards subtended by pink bracts covered by sericeous hairs. The single flower presents a calyx from cream white to pale purple colour covered by short white down, as well as the corolla by the greenish yellow vexillum with two purple pink spots acting as guide to the nectar, the purple pink wings and the white keel enclosing the pistil and 10 stamina; the flowers, lasting one day only, are pollinated by the bees, in particular Megachile velutina (Smith, 1853), with a remarkably low fructification percentage. The fruit is a pubescent flat legume, initially green, then brown when ripe, containing 1-3 seeds.

It easily reproduces by seed in sandy organic loam maintained humid at the temperature of 22-24 °C.

Species rare in the wild, where is seriously endangered by the deforestation, as well as in cultivation, in spite of the remarkable ornamental characteristics of the foliage and of the long-lasting inflorescences. Fast growing, is cultivable in the tropical and subtropical climate zones in full sun, made to climb on trellises and railings in order to fully appreciate its blooming; is not particular about the soil provided well draining. The waterings must be regular, even if well rooted can bear drought periods, and the fertilizations, in spring-summer, done with balanced products with microelements. Where the climate does not allow the permanent cultivation in open air, it can be cultivated in pot, with proper supports on which to climb, in order to shelter it in particularly luminous greenhouses or winter gardens, with lowest temperatures not less than 15 °C.