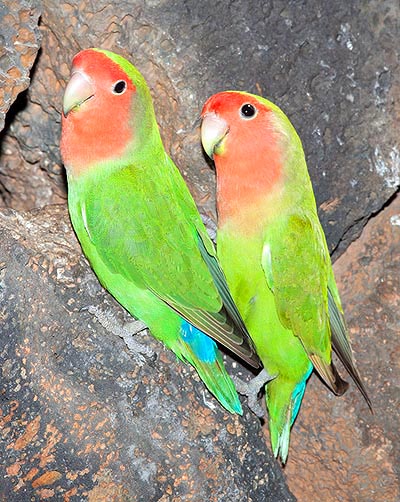 They are called inseparable because of the couple's affection © Mazza

It was discovered by the French ornithologist and biologist Louis Jean Pierre Vieillot in 1818, during his several trips in the African continent, besides those done in western India and North America, which allowed him to describe, for the first time, many genera and species of birds.These ones, together with Agapornis roseicollois , were documented in several of his scientific works, among which “Analyse d’une nouvelle ornithologie élémentaire” d’Eterville, Paris 1816 and “Ornithologie” Lanoe, Paris 1818.

The Agapornis roseicollis, is commonly called in Italian Inseparabile dal collo rosa, or Faccia rosa, whilst in English: Peach-Faced lovebird.

The term “inseparable” is referred to the genus Agapornis due to the inclination to social affectionate behaviours shown by these parrots living in abiding couple. So much that, when this is broken due to the demise of one partner, it is to be quickly shaped anew, with an alike of the same sex, otherwise the surviving partner will die for sadness.

One of the typical affectionate behaviour forms observed in the inseparables, is the whole of the cleaning cares by sleeking the feathers, which these couples of bird administer continuously during the whole day.

The genus Agapornis, discovered by the English botanist, ornithologist, biologist and artist Prideaux John Selby in 1836, subdivides in 9 basic species, among which the Peach-Faced Lovebird (Agapornis roseicollis).

This mutation, called Ino mutation, is caused, with about thirty variations, by a mutation of a gene (Ino), associated with the sexual chromosome W, equivalent to the X in the mammals, due to the presence of its genetic locus on such heterochromosome. Such mutation renders totally impossible the physiologic production of melanin (the normal pigment determining the colouration of the feathers of the birds, as well as of the skin in the humans or of the fur and mantle in the other animals), avoiding all the other possible chromatic combinations of the plumage depending from the physiologic concentration of such substance. This phenomenon is called, in Genetics, Epistasis (which can be dominant or recessive, if the gene/genes involved is/are dominant or recessive). In short, without going too much into details of the mechanisms, the Epistasis is a genetic phenomenon due to which the effects of a gene are modified by one or more genes (all can be in recessive or dominant status depending on the associated phenotypic character, in the case of the Ino mutation, they are all recessive); these genes are called Modifying Genes.

This physio-genetic phenomenon stands at the base of the pale yellow colouration of the Agapornis roseicollis. The Ino mutation can express in three variants with regard to the starting colour in the animal with wild-type phenotype. In the case of the Agapornis roseicollis, because as base we start in the wild-type from a grass-green colouration, the phenotypic mutation is called Lutino variety which will give a pale yellow colouration, that is, whereas it is bright green in the wild-type, in the mutant the same is pale yellow. Albino (coming from the blue wild-type) and Cinnamon are other variations. Apart this phenotypic difference referred to the colour of the plumage, the ethology, the reproductive biology, the ecology-habitat, the zoogeography, the alimentary ecology, are equivalent in the Agapornis roseicollis (wild-type) and in the Ino mutation-Lutino, therefore when we describe the wild-type we do the same also for its mutant.

The Agapornis roseicollis lives in south-western Africa. Its home-range spreads from south-eastern Angola, where also the race Agapornis roseicollis catumbella is located, passes through Namibia and reaches north-western South Africa. Often, species escaped from the captivity do well reintegrate in nature (feral species). Feral specimens have been sighted in Arizona and in London.

They can be found up to 1600 m of altitude above the sea level, in vast mountain forests, where they carry an arboreal life thanks to the presence of a zygodactyl foot, but they are also present in the downhill tropical forests, in semi-desert areas and in the bush.

In the phenotypic mutant Ino mutation-Lupino of Agapornis roseicollis, the back and the belly are pale yellow (for the coverts) with some white dispersed dot. The rectrices and the feathers edging the wings are white, the tail ends with a slight pale-yellow colouration, the face and the ventral portion of the neck are intense pink, mainly in the mandibular part, surrounded by a light white halo.

The pink intensifies, turning to red, in the supra-orbital region up to the parietal-temporal lobe of the cranial capsule. The head is pale yellow in the upper portion, as the occipital lobe and the dorsal portion of the neck. The beak is orange-red, the iris red, the robust claws are of a weak pink colour. In the Agapornis roseicollis wild-type, the back, the nape and the wings are of a homogenous grass green colour.The lower part of the chest, the belly, the wings and the sides are pale green, there is a clear separation between red and green.

The remiges are black, with the outer expanded part green. The epaulette pale yellow, the two central rectrices are green with black apex. The ten lateral rectrices, are green with a red central region, which gradually gets narrow, from the exterior to the interior; there is a black band by the third quarter of its length, the apex is azure. The beak is of average size, hooked, robust and horny, with a yellow-green colouration at the base, and black-green tip. Dark brown iris with black pupil, not surrounded but edged by a thin ring of white small feathers, claws and toes greenish-grey, nails dark greay at the base, getting more clear towards the tip.

Both males and females are usually 15-17 cm long (like the other species of Agapornis), they weigh, as average, 40-70 g. They can live up to 20-25 years. Contrarily to the inseparables without sexual dimorphism, the Agapornis roseicollis does not have the white ocular circle (typical of the Agapornis personata). The subspecies differentiates for the brighter plumage and the more intense red on the front.

The Agapornis roseicollis, commonly called also peach-faced lovebird, forms a group apart, different from all the other Agapornis.

Often, for determining the sex in captivity, they utilize the presence of a pelvic gap which is of 1-3 mm in the male and of 6-8 mm in the female.

The Agapornis roseicollis loves water very much, more than any other inseparable. As said before, it is found in the humid and mountainous zones up to an altitude of 1600 m, but always close to water sources. Normally, it lives in small flocks, but, at times, bigger groups can be seen, formed by hundreds of specimens, pillaging tilled fields, looking for food. They nourish of grains, wild grass, graminae and berries.

They reproduce in February-March and nidify by colonies in hollow trunks of trees. The female builds up its own nest carrying the material between the feathers of the back. The deposition consists in 4 or 5 eggs, but at times they can be 6 or even 7, which are hatched, only by the female, for about 23 days. The young leave the nest when five or six weeks old and still go on in being nourished by the male, while the female starts a new hatching. The Agapornis roseicollis builds a very nice and elaborate nest, formed by a small entrance corridor and a spherical shaped incubation chamber. For building it, the female transports patiently small pieces of bark she takes off from the small branches found in the forest. On the other hand, the male does not attend to the construction of the nest, except when carrying with its beak some small pieces of bark. The female can be easily recognized when observing carefully the behaviour of the subjects, as it is very busy in the construction of the nest.

When in captivity, the Agapornis roseicollis nidifies in whatever time of the year. If the subjects are lodged outside, the best time for their reproduction Is the spring and summer, as the days are longer and warmer. If, on the contrary, they are lodged inside, they can nidify without any problem even in full winter, provided, however, that the hours of light are artificially increased and that the temperature of the room is never less than 8-10 °C.

The population of Agapornis roseicollis has gotten severe grades of reduction during the last years, and for this reason the CITES is controlling its trade and the IUCN monitors the dynamics of its population. However, we must now say that, at times, the man does useful things, even if unaware of this. It has been noted, in fact, that the creation of artificial sources of water and of living structures has given these birds new possibilities for reproducing and building nests. A manner for compensating, at least in part, in some geographic areas, the reduction of the numeric density of the species.