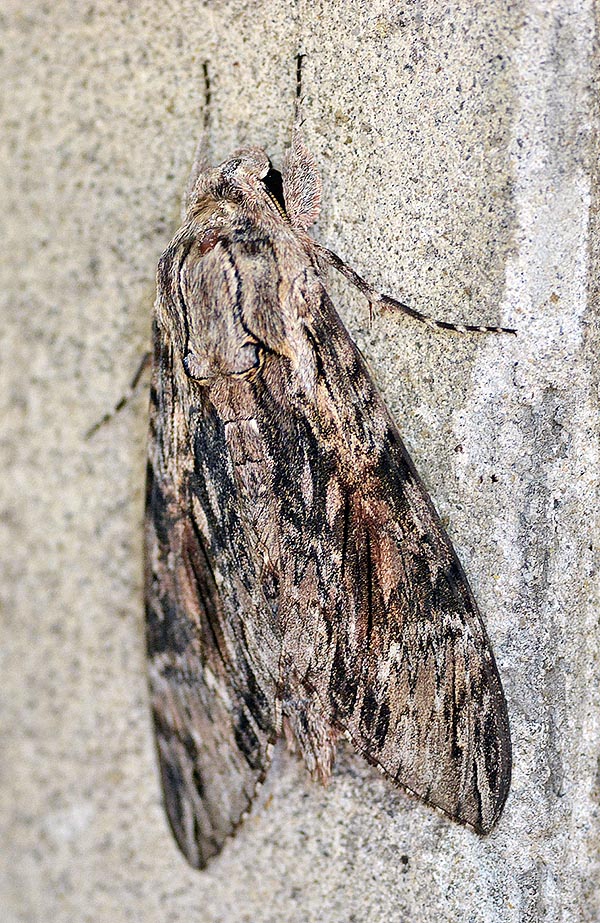 The Agrius convolvuli is a night butterfly with very vast diffusion, from Eurasia to Australia and New Zealand with a similar congener in America. Wide range migrant, starting from the Mediterranean climates with the time has gone more and more northwards in its lust of conquest © Alvaro Dellera

The very common Convolvulus hawk-moth (Agrius convolvuli Linnaeus, 1758) is a lepidopteran belonging to the family of the Sphingidae, group of heteroceran butterflies with mainly nocturnal activity, cosmopolitan and with a particular morphology that differ them from any other lepidopteran.

They have a massive body, very robust wings, thin and pointed that when resting are folded like a roof along the body and are endowed of an extremely evoluted and powerful flight ability.

Normally they are migrating species that effect ample range movements, in the attempt of colonizing seasonally new areas.

The convolvulus hawk-moth is the most involved in these colonizing migrations and performs every summer movements always more towards the north, for a summer generation, that however often does not survive at the local winter conditions.

Like most of the sphingids it is thought that these moths are a family still in strong evolution and that these attempts of colonization towards new areas always ampler, is the result of this continuous evolutionary fight.

The etymology of the scientific name leads as usual to the Greek mythology. Agrius is one of the giants who had the ardour to undertake a war against the gods. It was killed by the Fates, triad including Clotho, Lachesis and Atropos, who had the power of deciding of the destiny of the man and to place him among the good or the demons and to fix the length of his life.

The specific name convolvuli simply recalls the genus Convolvolus, to which do belong the plants usually hosting the larvae of this moth.

Also almost all of the vulgar European names are linked to the description of the host plant.

It is a moth very common all over Europe excepting the northernmost parts of the continent and the high mountain.

Its range extends in Asia, in vast zones isolated between them, up to Siberia, Korea and Japan, including most of China and totally South-East Asia. It is present widely in almost all the Australian territory and in New Zealand. In Africa is present along the Mediterranean coastline and diffusely in all the continent up to South Africa excluding the desert part of Sahara. 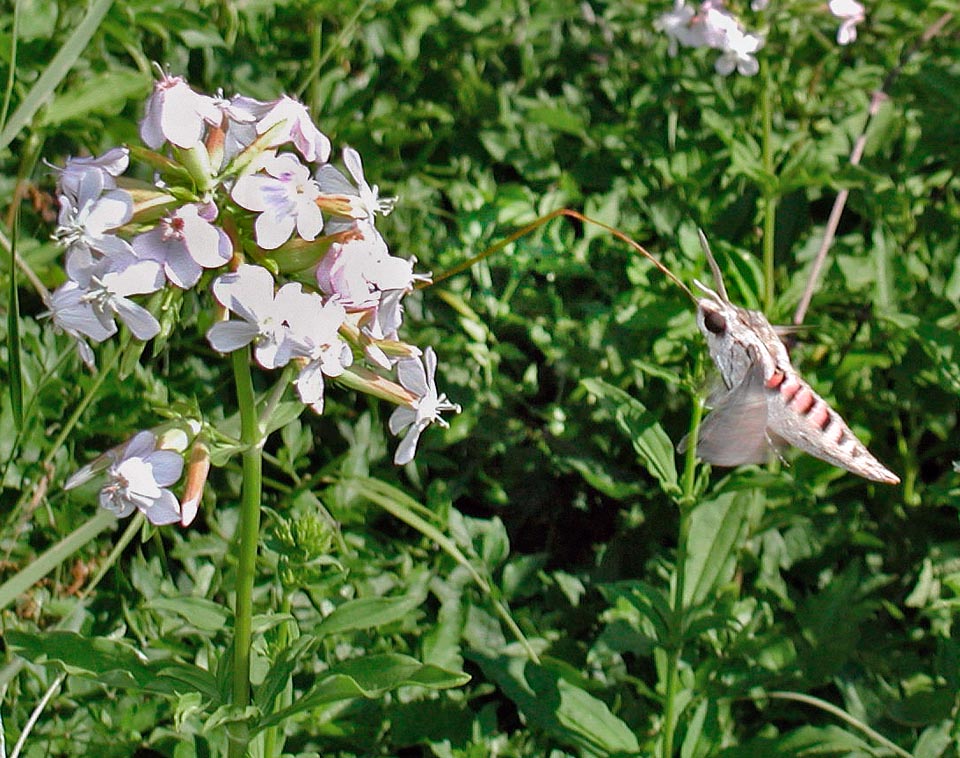 Great moth, has a wingspan that may reach the 12 cm. Capable of even 80 beatings per minute, the Agrius convolvuli can stand still in the air, near the flowers, to quickly fill up of sweet nectar with its very long proboscis. Then suddenly, in a moment, draws away scared or for another corolla with its dull hum © Giuseppe Mazza

The American congener Agrius cingulatus is a fairly similar species in the morphology as well as in the high migratory instinct and has been often met in Portugal and in the Cape Verde Islands. The primordial area of origin of the convolvulus hawk-moth, located in the southern Eurasian area and the following conquest of such a vast area, proves that characteristic of cosmopolitan migrant and the facility of colonization of this moth. This characteristic does so that it can be found in any environment and in any latitude.

Conversely, it does not love to get up in altitude and, rightly, in Europe it is found up to 2000 m, areas accidentally touched during the migrations whilst in China it gets to reproduce up to 4000 m. 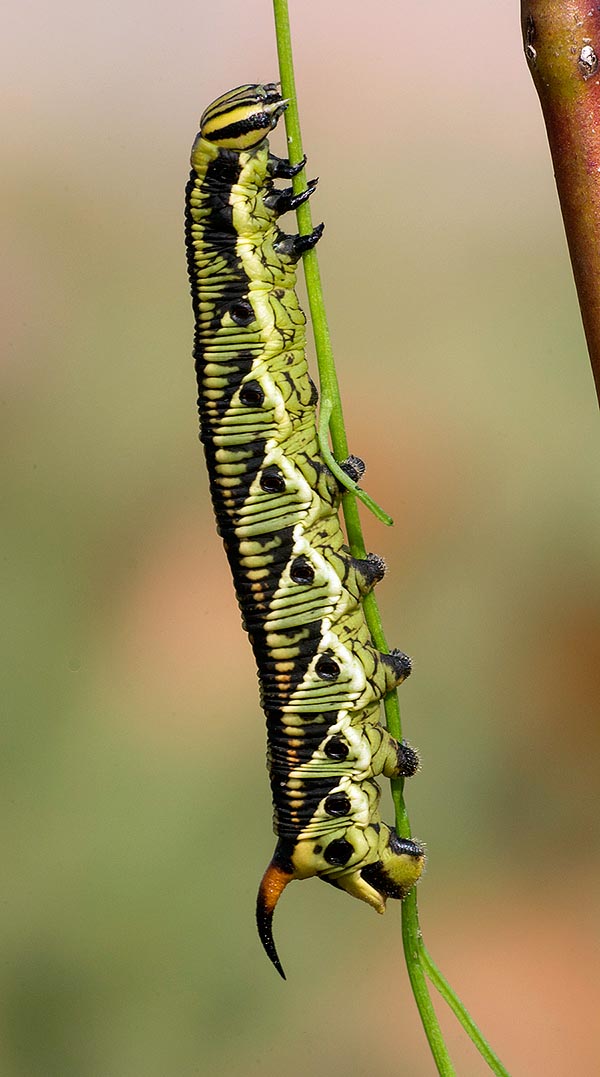 It is very much attracted by the night lights therefore these moths are often victim, during their migratory wandering, of the huge metropolitan lightings. In summer their corpses overthrown by the transiting cars and trampled on the sidewalks are found in huge quantity under the great street lights. It is by far the most frequent and common moth in Europe. The ease of retrieval of its main food, the capacity to adapt to any environment and the very high prolificacy are the winning points of this butterfly. However, the convolvulus hawk-moth suffers every year incredible reductions in its summer/autumn generation.

Its chrysalis bears with difficulty the winter cold and inevitably all the second generation, produced north to a certain latitude is inexorably eliminated by the nature. This line is caused by the winter conditions and by the sunlight gradient of the areas involved and may go down, in some winters, up to the 40th parallel. In the Palearctic area, the regions located north to this limit revive annually with the inflow of specimens coming mainly from tropical Africa or from the Mediterranean regions.

The Convolvulus hawk-moth is a big moth with a wingspan that may reach even the 12 cm.

It has fore wings very narrow and pointed of brown-greyish colour with more or less clear speckles that camouflage it strongly when resting, making it look like a piece of rotting wood. The hind wings, always invisible when resting, are of a quite reduced size and of clearer grey colour, crossed by darker belts and lines. The body is quite robust, flattened and characterized by coloured rings alternatively pinkish red and black.

The eyes are extremely big and prominent rightly for the necessity of having a night vision during the feeding and the migration. The antennae are very squat and sturdy especially in the males whilst in the female they are markedly more slender.

There is a slight sexual dimorphism due to a more evident dimension and a more cylindrical abdomen in the female.

The flight of this sphingid is quite noisy and it is not difficult to hear the dull hum of its beating of wings during the summer evenings, when intent on sucking, with its very long proboscis, the nectar of the petunias, of the nicotianas, of the lantanas and of the jasmines, flowers now present everywhere in the Mediterranean gardens. It can beat the wings up to 80 times per second. It flies during the warmest months going from June to October and it seems that part of the specimens of the last generation is subject to a counter migration southwards. A huge number of subspecies have been determined. 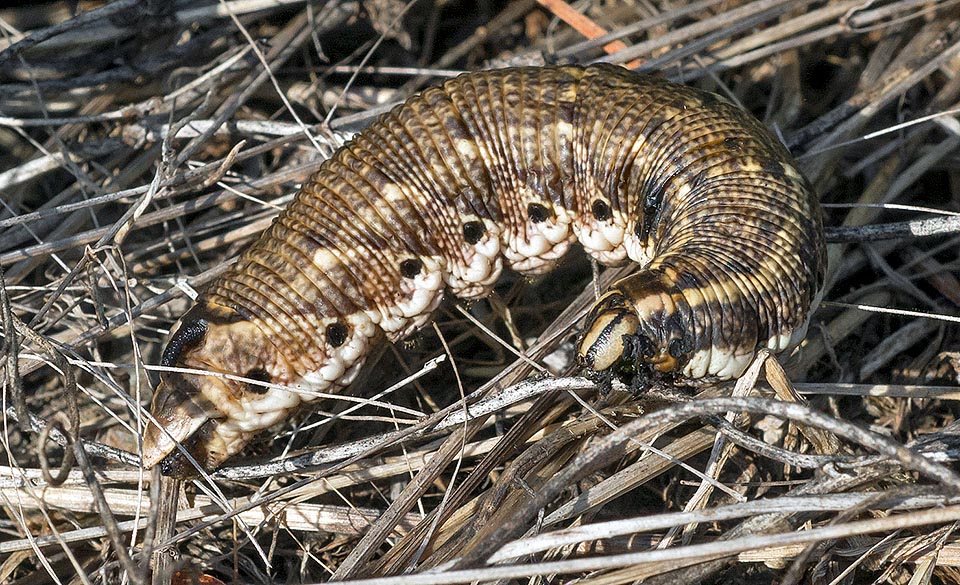 Mimetic and shy, as in this case, it is however very reactive if touched moving about violently and emitting, if not enough, an irritating greenish liquid © G. Colombo

It lays the eggs individually on the host plant while flying and sticking them on the leaf. They are bluish green and turn almost immediately yellowish. This sphingid is very prolific and the female may be able to lay up to 200 eggs. The incubation is fairly short and after about 10 days do appear small caterpillars of greenish colour. The larva grows very quickly reaching in short time even the 12 cm of length and a diametre of 1,5 cm. It has a very variable colour varying from a diffused blackish brown to an intense green and at times very clear up to a brownish yellow.

Like all sphingids caterpillars, it has on the last segment of the body a long and harmless pungent horn that should give the hind part the look of a second head. In fact, it’s only aim is to be of deterrence against the attacks of the predators. 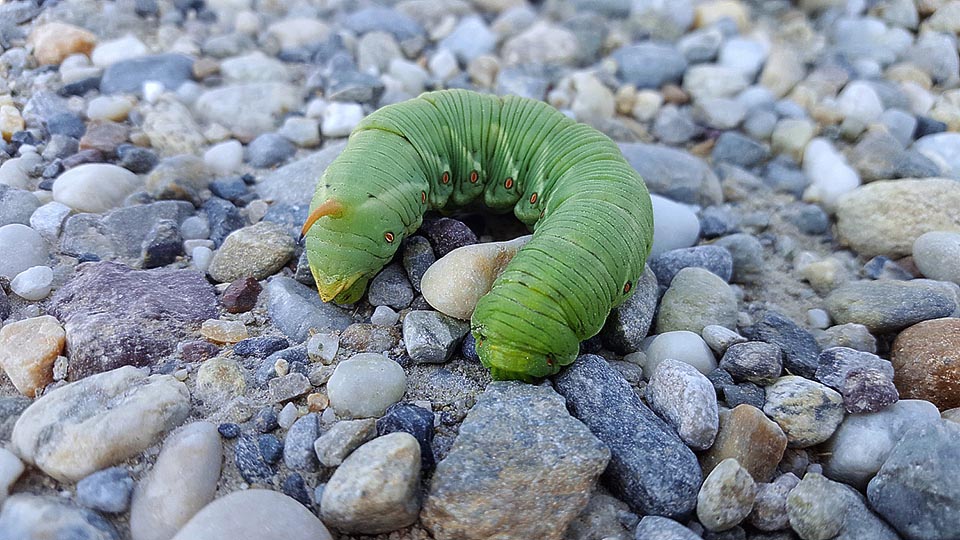 The caterpillar grows at expense of the Convolvulus leaves. When ripe it leaves the host plant and after a risky wandering in open air, like this unusual green specimen with fake red eyes, reaches quickly the place suitable for wrapping in vegetal debris and transform safely in chrysalis underground © Alvaro Dellera

It is a very reactive caterpillar and as soon as touched shakes violently and often emits an irritating greenish liquid for the unwary aggressor. Once ripe, the caterpillar leaves the host plant and after a long wandering, done at remarkable speed, chrysalises sheltering at some centimetres of depth in the soil and forms a capsule of vegetal debris.

In this period it can be often seen crossing country roads and paths in its necessary excercise that allows it to get rid completely of its digestive apparatus and getting ready for becoming chrysalis.

The chrysalis is up to 6 cm long and is of yellowish brown colour with a particular characteristic that renders it unique: the proboscis is detached from the body and is contained in a narrow case shaped like an umbrella handle. 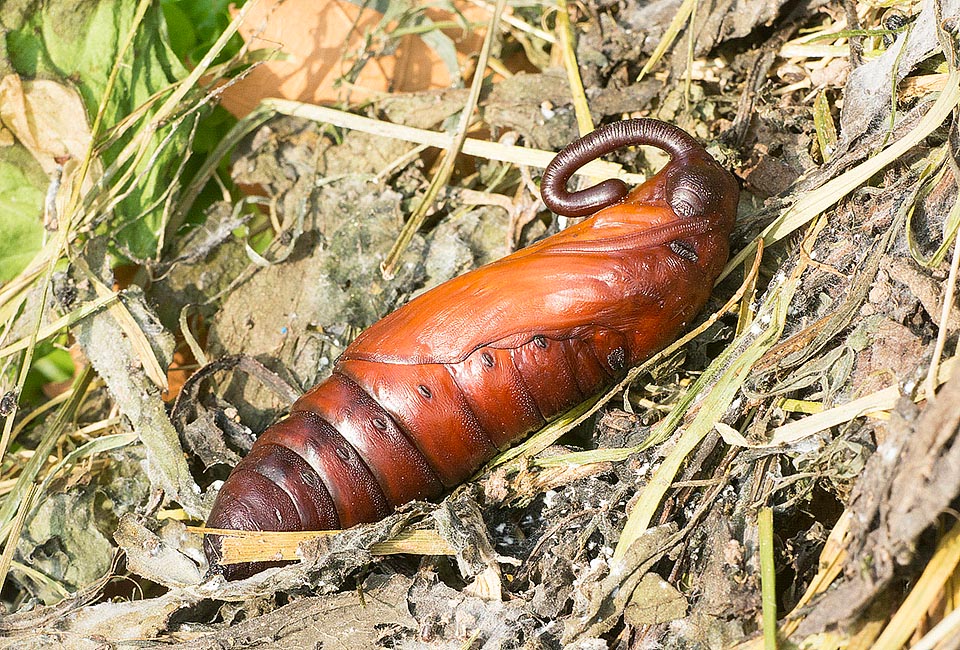 The chrysalis, here for the picture in open air, shows an odd umbrella handle shaped involucre intended for the proboscis. The Agrius convolvuli incubation lasts about 2 weeks and the last generation, if doesn’t die frozen during the winter, will flicker after months, about June, in the following year © Gianfranco Colombo

The intermediate generation will stay in this stage for about two weeks whilst that foreseen for the next year, provided it survives the winter, will appear only in the following month of June. In the tropical areas this moth is harmful for some plantations especially that of the batata (sweet or American potato). The caterpillar is often parasitized by some Ichneumonidae and Tachinidae. Host plants are mainly Convolvulaceae and Malvaceae. It particularly loves also the Morning glories (Ipomoea sp.) cultivated in the gardens.