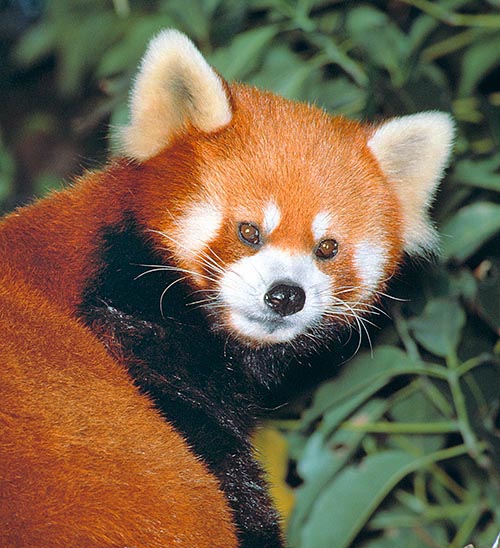 The classification of the Lesser panda or Red panda (Ailurus fulgens F. Cuvier, 1825) has been and is controversial: initially it has been placed in the family Ursidae and later on moved to the family Procyonidae. Actually, characteristics of both families are present in this species

For instance, the lesser panda has skull and teeth similar to those of the Giant panda (Ailuropoda melanoleuca). Always in common with the “older cousin”, it has an anatomical adaptation of the fore legs which allows it a better manipulation of the bamboo canes (main food for both species). On the contrary, it has, in common with the raccoons (Procyon lotor) the look: ringed tail, facial mask and pointed ears.

In spite of this, it has finally placed in an own specific family (Ailuridae) on the basis of the most modern genetic researches. The lesser panda, due to its evolutive history, is considered as a sort of a “living fossil”.

It seems nice to me to quote a passage from a text written at the end of the twentieth century where they narrate about the first lesser panda arrived alive in London and whose alimentary habits were very little known:

“…The first time it got out from its cage, the panda rushed on the rose bushes in the garden, of which it greedily devoured the most tender buds and most of the leaves, collected several unripe apples and various berries and ate also them all. Mr. Barlett feared that these foods might hurt it; instead, it was not so, as the health of the panda became more and more flourishing…”

The lesser panda is the only extant member of the family Ailuridae and its nearest fossil ancestors belong to species of “near” genera and all extinct.

These disappeared relatives were bigger and more robust than the lesser panda; in particular, they had stocky heads and jaws. This means that the lesser panda results being a sort of surviving species; the only “branch” of the evolution of its family having survived to the glaciations.

The family Ailuridae belongs to the superfamily Musteloidea which includes animals like the raccoons, the skunks (family Mephitidae) and the weasels (family Mustelidae) which therefore result being the closest living relatives, even if phylogenetically distant.