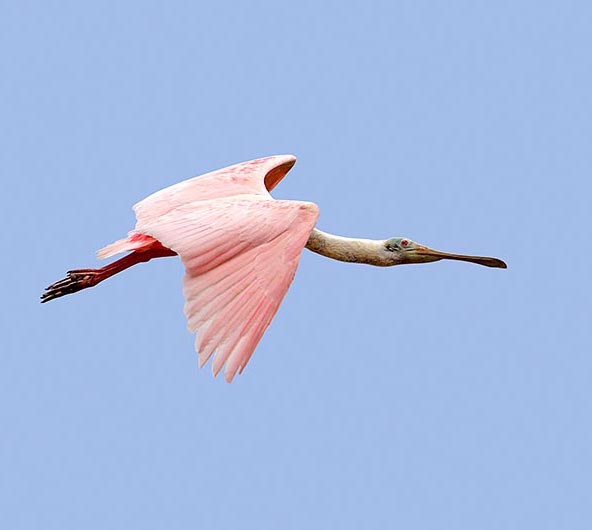 The Ajaja ajaja lives in Central and South America, up to Florida © Giuseppe Mazza

The Roseate spoonbill (Ajaja ajaja Linnaeus, 1758) is a splendid and odd bird afferent to the clade or subclass of the Ornithurs (Ornithurae), superorder Neognaths (Neognathae), order of the Pelecaniforms (Pelecaniformes), family Threskiornithids (Threskiornithidae), genus Ajaja.

The roseate spoonbills are diffused with at least a ten of species in central-southern Europe, in Africa, Asia, Australia, all afferent to the genus Platalea, and with the genus Ajaja in South America.

In reality, till nowadays many ornithological biologists, in the Ornithology magazines, identify the Ajaja ajaja, autochthonous bird of Central and South America, with the terminology utilized for the species of the Old World, that is, as Platalea ajaja; the International Commission for Zoological Nomenclature (ICZN), has not yet given a clarification about the matter.

The Ajaja ajaja is called by the natives “Rosado”, due to the colour of its livery, or “cucharon” (spatula, big spoon), due to the characteristic shape of its bill.

Besides the Central-South American Roseate spoonbill (Ajaja ajaja) other two much known species are: the African spoonbill (Platalea alba) and the Eurasian spoonbill (Platalea leucorodia), present in central-southern Europe, as in Italy (Sardinia, Puglia), even if it nidifies also in Netherlands, Hungary, in the northern areas of the Balkans, in eastern Europe, up to western Asia and in Africa, migrating to hibernate in central-southern Africa as well as in the Deccan Peninsula in India.

The roseate spoonbill is present in Central and South America (Mexico, Caribbean, Guyana, etc.), where several pairs intent on eating, with their beaks immersed in the water, may be observed. They are often found together with other wading birds and threskiornitids, such as egrets, herons, ibises, redshanks, grey and pink flamingos.

In reality, they are found also in the southern part of USA, Florida in particular. In this context, a centre where they may be observed and where the biologists may easily study them, us the National Wildlife Refuge of Ding Darling. Here, the roseate spoonbills live in community, together with several species of herons, western pelicans, redshanks, egrets and pink flamingos. 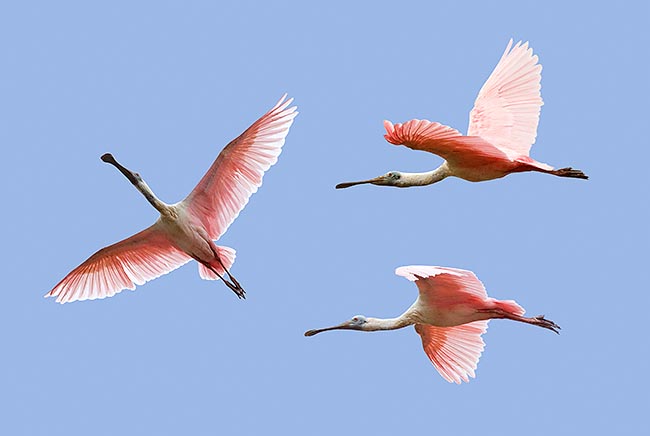 They are nimble animals, ready to elegant take offs by the least sign of danger © Giuseppe Mazza

They are animals loving the humid environments, such as the reed marshes and the mangrove associations (where they nidify building up their nest on the branches), the shores of the lakes and love also the muddy flat plains. Being pacific, not territorial, birds, it is quite easy to meet them in mixed communities.

For many morphological aspects, the spoonbills of the genus Ajaja and Platalea do resemble in the general lines. The differences are that the Ajaja ajaja have the bare head (without the characteristic tuft of the Platalea leucorodia) of a greyish colour, like the beak, which however has analogous shape to that of all the other species of spoonbills, including those of the Old World.

Its livery is gorgeous, almost wholly of a delicate pink colour, which contrasts with the bright carmine red of the remiges and the wing coverts. For the rest, they have morphologic characters and dimensions common to the other species. They have a maximum length of 80 cm. However, of these, about 15 cm concern the tail, of a roughly squared shape, and about 20 cm belong to the bill.

This last one, greyish, is long and robust. The two branches are flattened and form a structure similar, rightly, to a spatula, widening towards the rostral apex; the upper branch, furthermore, is dorsally characterized by grooves and roughness quite prominent and ends, at the extremity, in a small hook facing down.

The nares have a remarkably elongated shape and are significantly close, because they converge at the lower extremities; they are located almost at the base of the beak. The skin surrounding the eyes is naked, as well as that of the chin, of the part of the head between the eye and the lateral portion of the base of the beak and of the front, whilst the auricular region is feathery. 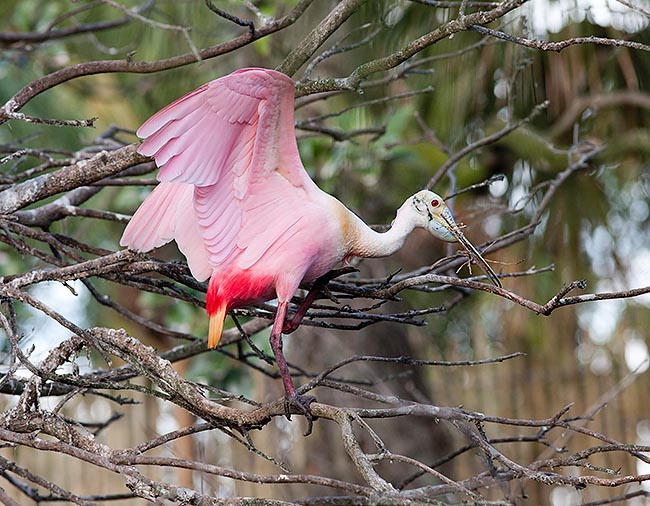 An Ajaja ajaja, in Florida, while building its nest © Giuseppe Mazza

The livery does not vary either due to the sex or due to the season. For this reason, there is no stable or seasonal sexual dimorphism.

In the adults, the eyes are red. But in the young the beak and the eyes have a different colouration: yellowish the first and light brown the second.

In all species the legs are very long; in the Ajaja ajaja they have an incarnadine colour. In all spoonbills, for adapting to the life in the aquatic biotopes, the three toes of the foot facing forward are united by a membrane which reaches the second phalanx. The biologists call this foot “syndactylous”.

They nourish moving continuously their long beak into the water, rooting the bottom like the flamingos, but unlikely these last, they are not filterers. Even if nourishing also of small crustaceans and molluscs, they eat in fact coleopterans and aquatic heteroptera, fishes, frogs and newts, not disdaining the shoots of the water plants. The beak is also utilized as pivot support, on which sustain, for moving the body in one or another direction. The adults do not have (apart possible caimans, alligators and crocodiles), a great number of potential predators, even if raccoons and bold eagles may kill some sub-adults. The chicks are predated by eagles and other raptors.

The human being does not hunt them, not even the autochthonous populations, because the flesh is uneatable, as greasy and with taste of fish. From reports collected on the field, it seems that they may live up to 17 years.

They are nimble animals, ready to the elegant take off as soon as they realize that a danger is approaching. Unlike herons, they fly with the neck outstretched forward and with an alternation of stiff wing beats. 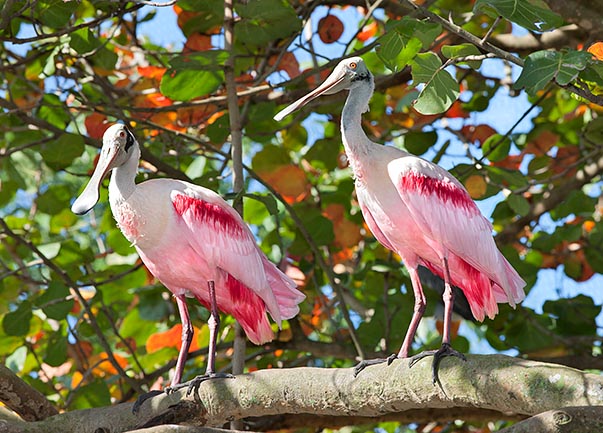 Even if its flesh is not edible, it's an endangered species due its habitat changes © Giuseppe Mazza

These ciconiforms have behaviour and habits not much different from those of the storks and the herons, like other aquatic birds of similar size. For this reason and their pacific temper characterizing them, they live well in mixed congregations.

They carry on their nutritional activity mainly in the day hours, even if often they do not stay idle during the night.

In the reproductive season, the roseate spoonbills unite in immense flocks, at times with herons, shags and glossy ibises, and build up their nest on the trees which line the frequented ponds, for instance the Mangroves. They are not demanding about the support, which may be a luxuriant tree or an old semi-submerged stump. And, at times, their nest may be built directly on the ground.

However, it is the male carrying on the most of the work in its construction, thus appeasing the partner. It is a really unusual spectacle to see, in the area where the Ajaja ajaja unite in Great flocks, thousands and thousands of nests close each other, which almost hide the structures of the branches. The eggs are laid by late April, or early May, in a number varying from three to five. Usually, they are four. They are white, spotted of brown, 67,3 x 45,5 mm. The progeny is followed for long time by both parents, also when it has become self-sufficient, and with it they make long flights in the vicinities.

Seen the unpalatable nature of their meats, the decrease of the population of the Ajaja ajaja, is to be attributed to phenomena of habitat modifications and of alterations of the distribution areas where they live.

The IUCN monitors and counts the populations tirelessly; presently it is considered as a vulnerable species. Due to their splendid livery, these spoonbills are often present inside zoological gardens and parks. They adapt very well to the captivity, reproducing and also getting fond to those who feed them.