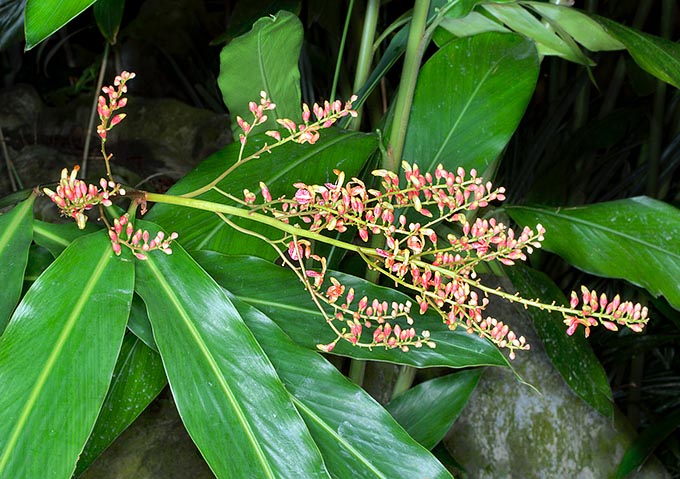 The species is native to Borneo where it grows in the humid forests as well as at the margins of water streams and in open spaces, such as roads and paths.

The Alpinia nieuwenhuizii (1904) is a rhizomatous perennial herbaceous species with robust pseudo-stems, 1-3 m long, with leaves, on an about 5 cm long petiole, oblong-lanceolate with pointed apex, 50-60 cm long and 7-12 cm broad.

Much ramified panicle terminal inflorescence, up to 35 cm long, with ramifications at the base up to 16 cm long, carrying numerous flowers, up to about 4 cm long, with whitish tubular calyx 1,2 cm long with 3 longitudinal nervations and indented margin, pink tubular corolla with pink labellum and red streaks, about 2 cm long, and purple curved filament. There are two different populations which differ for the dimensions of the flowers depending on the relevant habitat, one of the plants living in the forests, with smaller flowers, and the one living on the banks of the rivers and at the borders of the roads and paths with bigger flowers, having different pollinators, difference which is confirmed at genetic level.

The fruits is a globose indehiscent (which doesn’t open spontaneously when ripe) capsule of 2-3 cm of diameter, persisting for long time on the plant and containing 3 seeds. It easily reproduces by division and by seed, previously kept in water for 24 hours, in organic loam with addition of sand or of perlite, in order to improve the drainage, kept humid at the temperature of 22-24 °C, with rather variable germination times, starting from one month.

Vigorous species, little known outside its origin zone which would deserve a greater diffusion due to its luxuriant foliage and the long-lasting inflorescences, cultivable in the tropical and humid subtropical climate zones, in full sun or slight shade, on draining soils rich of organic substance, its cultivation may be tried in capacious pots, in order to be sheltered during the coldest months, where the climate does not allow its continuous permanence in open air.

Locally, the young shoots are consumed as vegetables. Laboratory studies have evidenced antimicrobial properties of the essential oil gotten from the rhizomes.