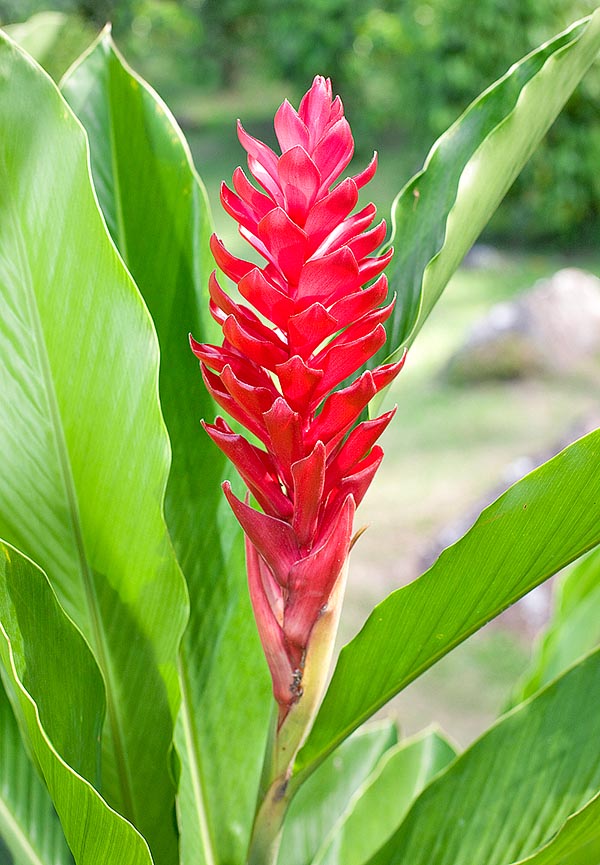 The Alpinia purpurata is very cultivated in tropical gardens due to its lush vegetation and the showy red, pink or white 30-40 cm long inflorescences, lasting for about three weeks © Giuseppe Mazza

The genus is honoured to the Italian physician and botanist Prospero Alpini (1553-1617) ; the Latin name of the species “purpurata” = dressed in purple, refers to the colour of the inflorescences.

Perennial herbaceous plant, rhizomatous, shows thin stems, tall up to more than 2 metres, similar to canes; the leaves, long up to 70 cm and wide up to 20 cm, are of a glossy pale green colour.

The fruits, seldom produced, are globose capsules with a diameter of about 3 cm, containing small black, oily seeds, often with a red aril (exterior covering which in some species coats the whole seed or part of it); on the inflorescence, upon the withering of the flowers, come out several plantlets, which, while growing, with their weight, cause the bending of the stem up to the ground, where they root, thus forming a new tuft.

It reproduces easily and usually by division and through the plantlets produced on the inflorescence.

Cultivated in all tropical areas both for the long lasting inflorescence, widely utilized in the floral decorations, as garden plant, besides the inflorescences produced all over the year, for the luxuriant vegetation.

It requires a constant humid warm climate during the whole year, in full sun or partial shade, and rich soils, preferably acid or neutral; outside from the tropical or humid subtropical zones, it must be cultivated in warm greenhouse, in fact, even if resisting for short periods to temperatures close to zero, it seldom blossoms.