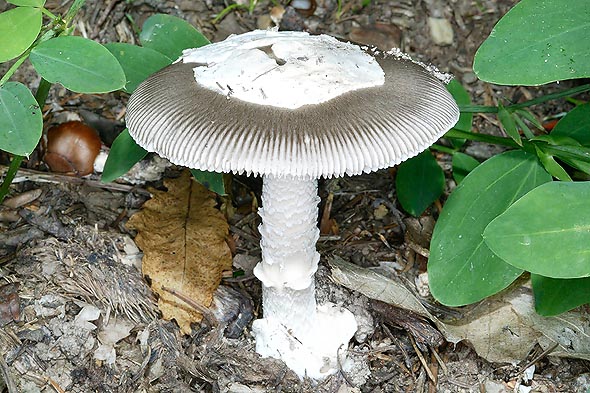 The name has been given honouring the botanist René Maire (1878-1949), graduate in Natural Sciences.

The Section Vaginatae (ex Amanitopsis = Amanitas without ring), is characterized by basidiomata with prevailingly filamentous hyphal structure, composed by extended cells, so that the general or universal veil which protects them during the first growth stage (primary), while tearing, persists almost integrally at the base of the stipe, with the form of a volva defined as sac-shaped, more or less wrapping, leaving on the surface of the cap some patches of variable size. They show the margin of the cap clearly striated, “combed”, and absence of partial veil, since it forms only at embryionic stage, to dissolve, later on, in thin flocks, or stripes, which decorate the stipe. We find Amanitas all edible, after cooking, as they contain toxic, but thermolabile, substances (the hemolysins), which dissolve with temperatures of 70-80 °C.

Cap: of average size, from 6-10 cm, not much fleshy, frail, from hemispheric to convex to flat, with margin clearly striated, grey, ash-grey, bister-grey colouring, with remains or patches more or less big, white.

Stipe: 5-12 x 1-2 cm, cylindrical, slender, fistulous, attenuated at the apex and enlarged at the base, covered by thin floccosity, or concolorous stripes. Ring absent. Sac-shaped volva, wide and membranous, sheathing at the base and free in the upper part, “tulip” shaped, white, greying with the age.

Notes: not always easily recognizable, just for the resemblance with A.vaginata, with which it is often mistaken. It distinguishes mainly for a more robust structure, for the cap always hemispheric, for the volva sheathing downwards, and flared upwards, which gives it the typical shape of a tulip.

Its variability is critical, as some authors consider as varieties some ecological forms which, on the contrary, for others are species defined as real and proper taxa.

Amanita cistetorum Contu & Pacioni: species apart, but it would seem more an ecological variety of the A. mairei , habitat cistus, smaller and darker.

Remarks: Generally, it is difficult to recognize it in the group of the Vaginatae, either macroscopically, or microscopically; it distinguishes from the Amanita argentea for a slightly different volva and for the tendency to become grey with the age; from the Amanita huijsmani for a more opaque grey colouring and not metallic grey as this last; the Amanita supravulvata has a narrower volva in the lower part and flared on the upper one. This last character, typical usually of the group of the Vaginatae, seems to depend on the different ambient and meteorological conditions during the phases of growth of the fungus.