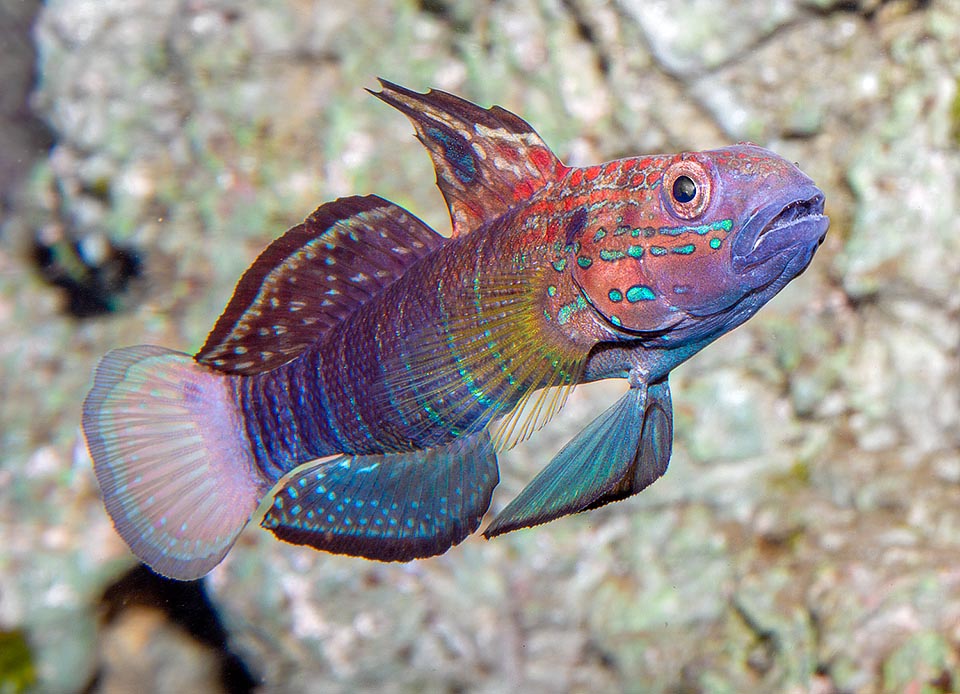 The Sleeper banded goby or Whitebarred goby (Amblygobius phalaena Valenciennes, 1837) belongs to the class of the Actinopterygii, the ray-finned fishes, to the order of the Perciformes and to the family of the Gobiidae, one of the richest of the marine world, which boasts more than 200 genera and almost 2000 species, mainly present in the tropical and temperate seas, but also in fresh and brackish waters, where some, called catadromous (that is, running downwards), after having spent good part of their life in the rivers, go down to the sea for the reproduction.

The name of the genus Amblygobius comes from the Greek (ἀμβλύς) “amblys” = obtuse, blunt due to the tapered shape and “gobius” the name the Latins gave to its Mediterranean cousins, whilst the species phalaena comes always from the Greek (φάλαινα) “phalaina” given by Aristotle to the moths, probably due to the colourful and not less fanciful and elegant livery of these fishes. 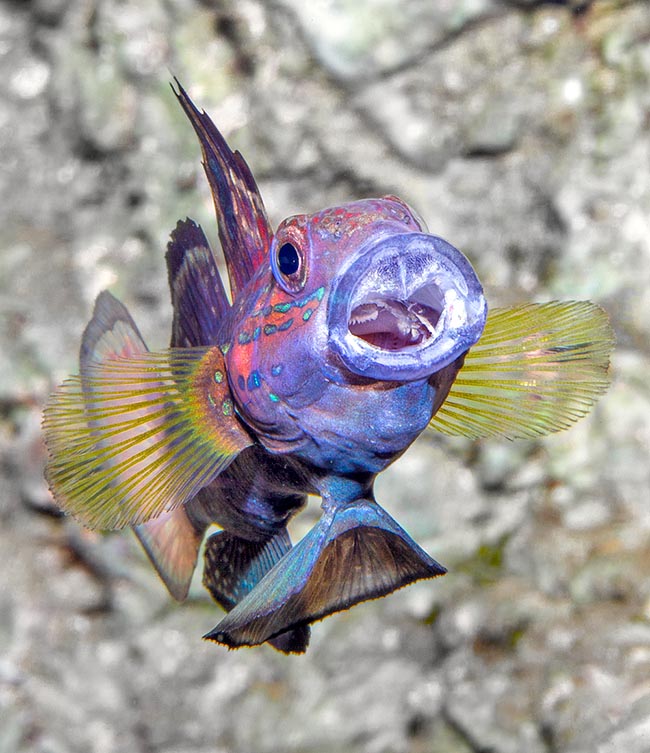 The mouth is particular, done for digging long dens and chewing the sand it expels from the gills holding only small animals and unicellular algae. The ventral fins form a sort of sucker for anchoring to the environment © G. Mazza

The Amblygobius phalaena is frequent in the tropical waters of the Pacific Ocean, from south of Japan and the Philippines to Singapore, Indonesia, Papua New Guinea, Australia and Micronesia up to Rapa, the French Polynesia most remote island.

It is a bottom and shallow water fish, rich of hideouts, that usually does not go down under the 20 m of depth. The males, territorial, live alone or with one female digging tunnels in the sand under the stones, and at the base of the coral formations. These tunnels, up to 30 cm long, with a diameter of 6 cm, may reach, depending on the substratum, even the 19 cm of depth. A safe haven, where to shelter at the least sign of danger besides small emergency grottoes scattered on their small territory if the competition of the other males allows it.

The Sleeper banded goby measures about 12 cm, but even less, with a maximum of 15 cm. There is no sexual dimorphism. The livery is fairly variable depending on the zones and the age with more or less bright hues. Typical are, between variously coloured arabesques, dots and dashes, 5 dark vertical bands.

The first dorsal fin has a dark ocellus, probably for reminding the intruders the presence of spines, and in the adults is evident, in the upper part of the caudal fin, a false black eye, symmetrical to the true one, to confuse the ideas to the predators that will see it running away on the contrary direction.

There is no swim bladder, present in almost all fishes but absolutely of no use in this case seen the sedentary and benthic life. 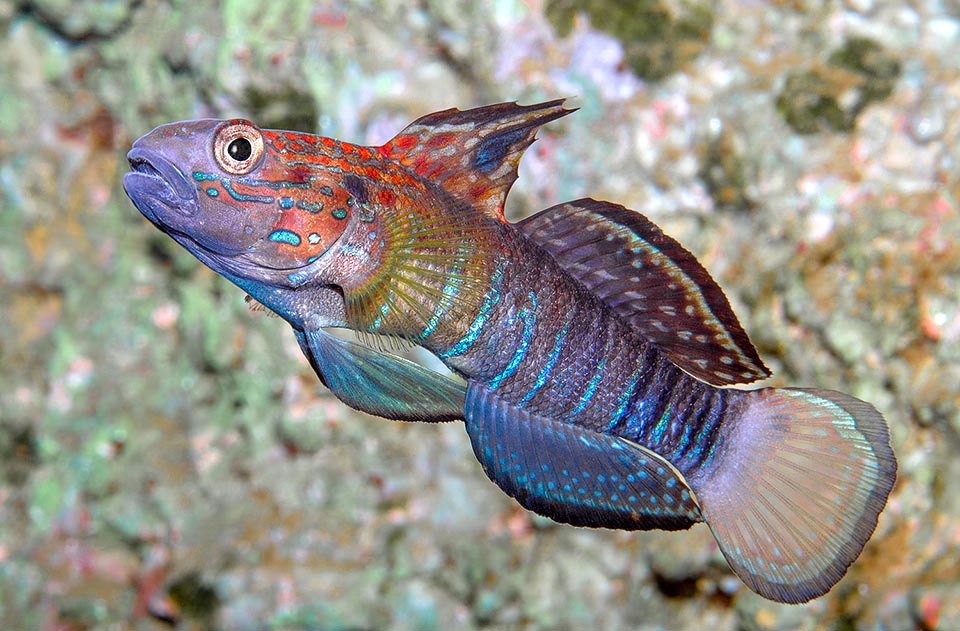 There is no sexual dimorphism. 3-4 days before the full moon, the females lay on the vault of the grotto thousands of eggs surveyed by the male. The will open shortly, with the full moon, when the tide is higher and bigger is the dispersion of the larvae in open sea where they spend 3-6 weeks before colonizing other bottoms © Giuseppe Mazza

The Amblygobius phalaena nourishes mainly of small animals and of unicellular algae, such as the diatoms, collecting and chewing sand it expels from the gills holding the food, but does not disdain the green filamentous algae infesting the madrepores. It pulls them up, it pellets them with vigorous eat and spit and finally swallows them.

The reproduction occurs 3-4 days before the full moon. The male cleans up carefully a small grotto and after having seduced the female with a love dance this last glues on the vault of the cavity thousands of eggs, immediately fecundated. They are surveyed, ventilated and cleaned by the male who remains until the brood close to the nest, while the female conveys with the fins air rich of oxygen from outside. 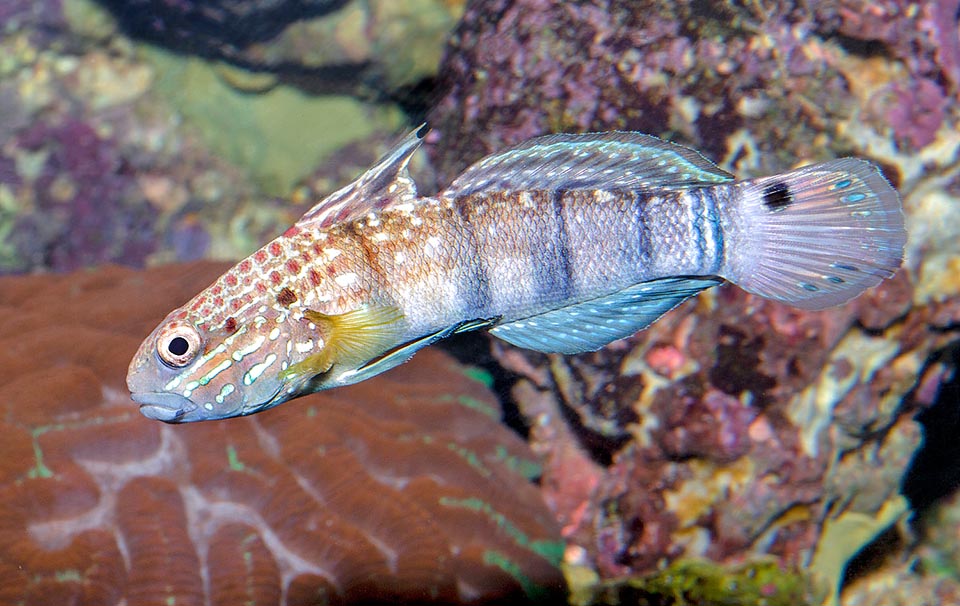 The larvae, pelagic, come consequently to life with the full moon, when the tide is higher and bigger is the dispersion in open sea where they do live for 3-6 weeks before settling on the seabed and colonizing other places.

The main predator of the Sleeper banded goby is the Synodus englemani, a “variegated lizard fish” with the big mouth that stays in ambush on the bottom.

Considering however that the populations decimated by the events may double their number in less than 15 months and that the Amblygobius phalaena is only moderately fished for the aquariological market, the vulnerability index of the species stands among the lowest existing, marking (2019) just 10 on a scale of 100.