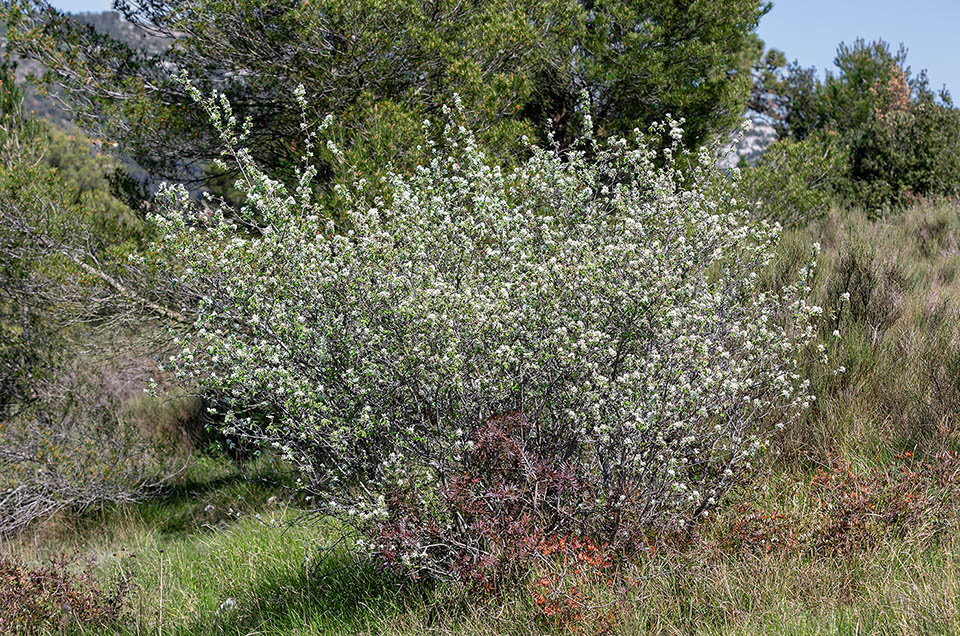 Amelanchier ovalis is a shrubby species belonging to the family of the Rosaceae, described by the German botanist Friedrich Kasimir Medikus (1736-1808) in his opus “Geschichte der Botanik unserer Zeiten” published in 1793.

This is the first species referred to the genus Amelanchier, whose etymology in fact refers to “la mélanche” (itself derived from melanka = black berry), the French name with which Amelanchier ovalis is known Savoy and in Provence, corrupted in l’amélanche because of a wrong separation of the article, with the addition of the suffix -ier indicating a tree.

The genus includes about 20 species, diffused between Europe, Asia and North America. Precisely in this last area is present the greatest concentration and diversification of the species, so that every region of Canada and every state of continental USA counts at least one species of Amelanchier in its flora. 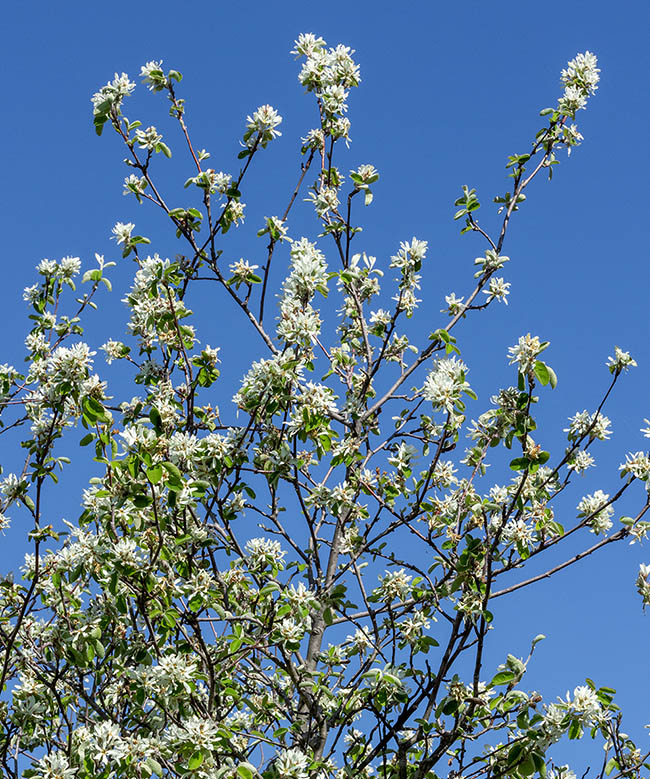 The showy blooming occurs in spring, between April and May, simultaneously with the appearance of the leaves © Giuseppe Mazza

The classification of the various species inside this genus has created numerous problematics and is somewhat controversial especially for the American ones, so that the various Authors estimate 6 to 33 species, mainly due to the frequent phenomena of hybridization, polyploidy and apomixis.

Amelanchier ovalis is the only species of the genus present in Europe, where is present in the central areas of the continent (going north up to Belgium and Germany and east up to Poland and Romania), as well as in the southern ones, including some islands of Mediterranean.

Furthermore, it is present also in North Africa (Algeria and Morocco) and in western Asia (Turkey, Middle East and Caucasian area).

The etymology of the specific name “ovalis” refers to the oval shape of the leaves.

In Italy the species is known with the name of “pero corvino”.

It preferably grows on superficial soils poor in humus and nutrients, playing an important pioneering role, for instance, on the rocky slopes of calcareous nature, going at times up to 2000 m of altitude, provided in a sufficiently sunny and warm position.

This is a deciduous shrub, having no spines and usually 1-1,5 m tall, but at times reaching even 3 m.

The stem as well as the branches are characterized by a reddish bark and a tomentum due mainly to the presence of short and patent hairs.

The leaves have an ovate-elliptic lamina, are 2 to 4 cm long and have toothed margin. The lower pagina is white-tomentose, particularly in the young leaves.

The flowering is quite showy and takes place usually during the spring months, between April and May, simultaneously with the appearance of the leaves.

The corolla of the flower is formed by 5 white petals rather long and narrow, well spaced with each other, carried in short racemose inflorescences. The sepals are short and divergent, often reddened in the lower part. 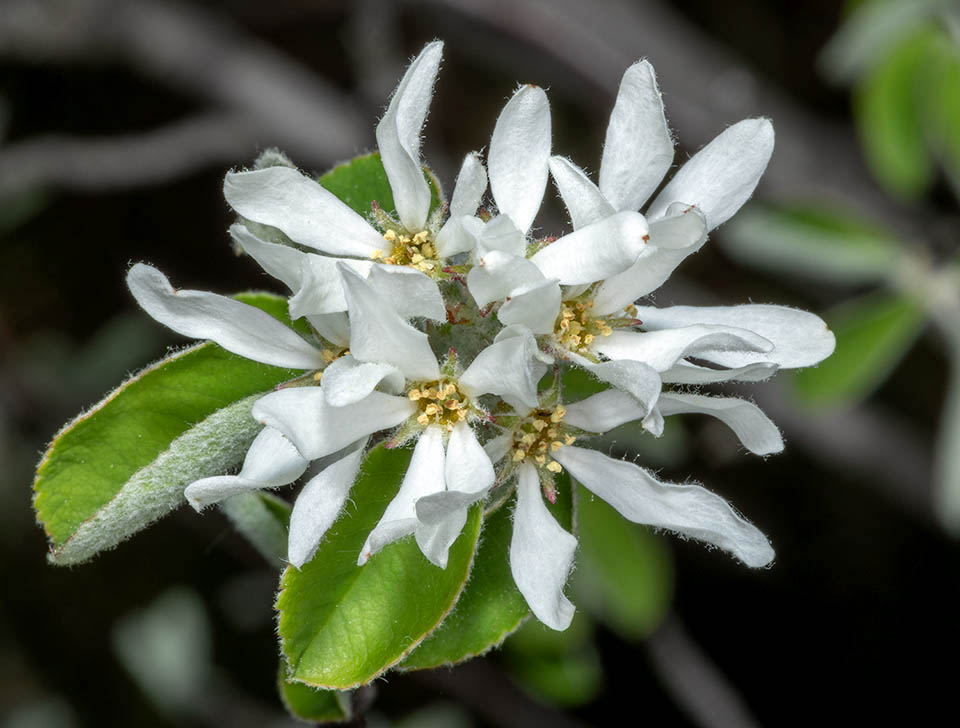 Mainly in the young leaves, the lower pagina is white-tomentose. The flower has 5 white petals borne in short racemose inflorescences © Giuseppe Mazza

The fruit is a small pome, a false fruit as the true one is represented only by the central part wrapping the seeds (core), whilst the part grown around derives from the receptacle.

The pome is black blueish with a diametre that can reach up to 1 cm, having a taste similar to that of the pear or the fig.

Though edible, due to the scarcity of pulp, it is not particularly enticing for man, but it is very much appreciated by the fauna and particularly by the birds who ensure its dispersion.

However, especially in the past, the fruits were used for preparing jams, preserves or for flavouring the grappa and moreover, still today, it is considered as a good melliferous plant. 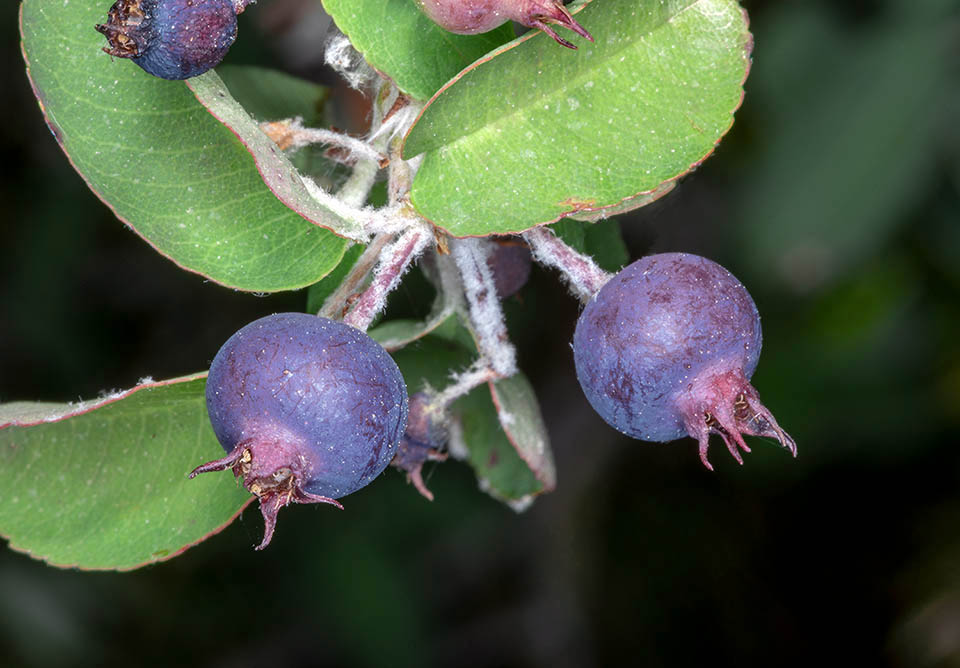 The black-bluish edible fruit, is a small pome of about 1 cm with a taste similar to the pear or the fig. Leaves and bark have officinal virtues © Giuseppe Mazza

To the bark and to the leaves prepared in infusion were attributed antipyretic, anti-inflammatory, antirheumatic, astringent, diuretic and hypotensive properties. Rightly for these medicinal properties the species was often cultivated in the vegetable gardens of the monasteries.

Its wood was utilized for making tool handles, and sometimes also for realizing valuable objects. Finally, branches, leaves, and bark were used for dyeing the fabrics or the wool.

At present the species is at times proposed as an ornamental plant for the gardens, as resulting of easy cultivation thanks to its capacity to thrive also in poor and relatively arid soils, whilst it does not like the soils that keep most for too long.