The cashew, Anacardium occidentale Linnaeus (1753), is native to northern South America. It belongs to the family of the Anacardiaceae, which includes about 77 genera and 600 species spread all over the world, mostly in the tropical and subtropical regions, with a few specimens in the temperate areas. It has well-known fruit and nut trees such as the mango (Mangifera indica L.) and the pistachio (Pistacia vera L.).

The common name ‘cashew’ comes from the Portuguese ‘caju’ and the Indian name ‘acaju’. In Spanish it is also called ‘merey’ or ‘marañón’. 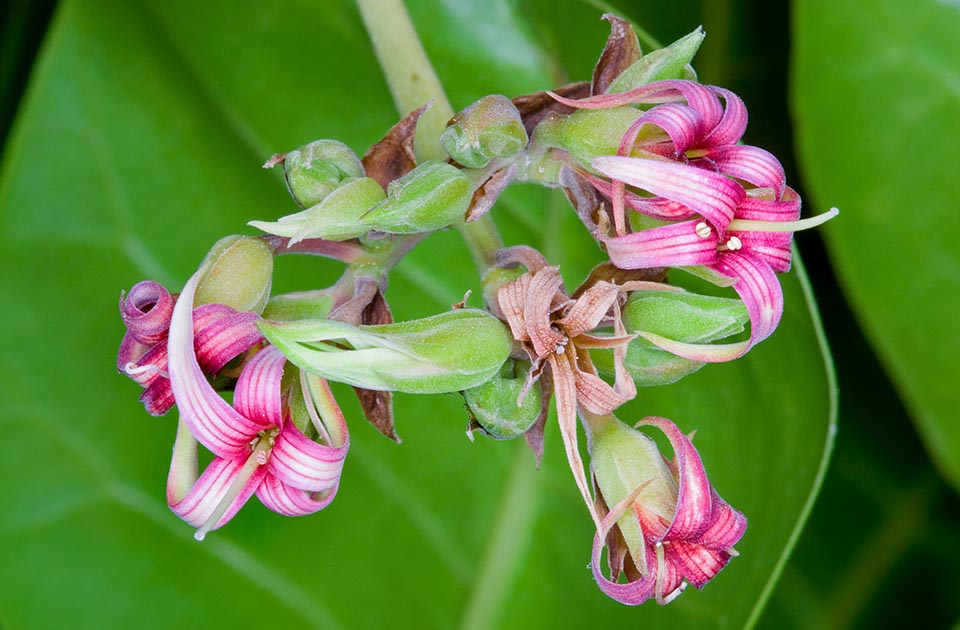 Inflorescence of Anacardium occidentale, species of northern regions of South America that in nature can be 12 m tall © Giuseppe Mazza

The tree is an evergreen perennial, often small to medium in size but capable of reaching over 12 meters under favorable conditions. While the shape can be conical and tall, it is often low, with a flat canopy, and the lower branches touching the ground. Like the mango tree, the cashew has a main anchoring tap root and an extended lateral root feeding system. The tree establishes quickly from seeds. The leaves are glossy, oblong and rounded at the apex, thick and with a leathery consistency. The color of young leaves can be brown-red to yellow-green, turning later to a shiny dark green.

The inflorescence is a panicle bearing hundreds of small flowers, which are white as they open but turn pink the next day. The flowers can be either hermaphrodite (perfect) or male (staminate). 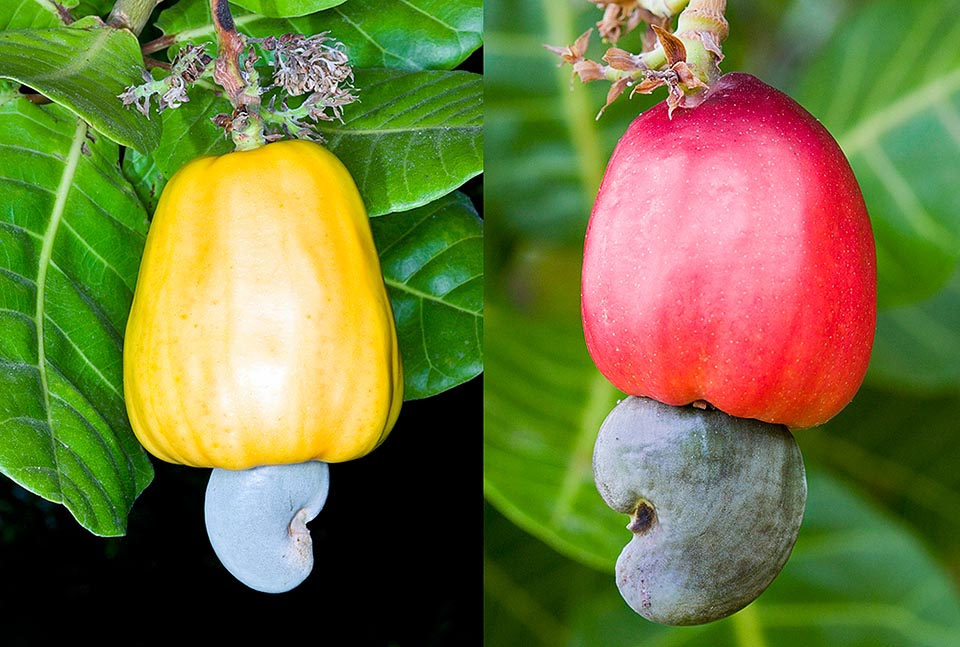 The true fruit, reniform, below, contains one seed only. Protected by a shell, that emits when touched a caustic latex, is very nutritious and edible after toasting. It's carried by a big edible unusual peduncle, yellow or red, resembling an apple. Juicy, rich in vitamins and minerals, can be conversely consumed fresh © Giuseppe Mazza

The fruit is kidney shaped and encloses the nut, a single seed which is edible after roasting, highly nutritional and is the main object of the trade. The latex of the nutshell is caustic and must be eliminated during the roasting process. The pedicel of the fruit swells to form a false, juicy apple-like fruit. Its skin can be red or yellow. It is rich in vitamins and minerals and is eaten fresh.

Mozambique, Tanzania and Brazil are the main cashew nut producers.