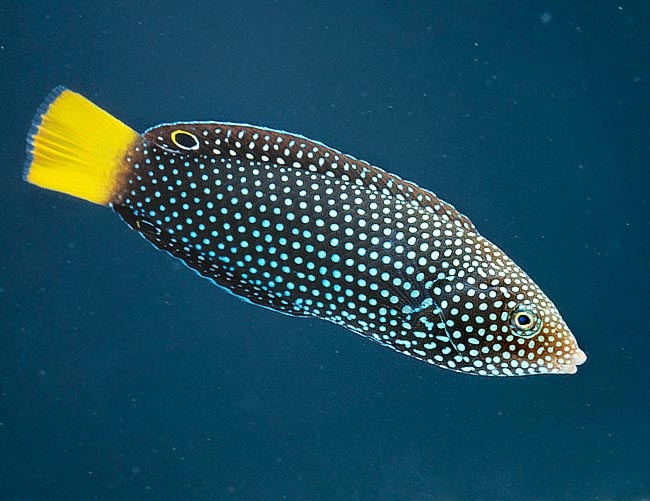 The Spotted wrasse (Anampses meleagrides Linnaeus, 1758), belongs to the class of Actinopterygii, the ray-finned fishes, to the order of Perciformes and to the family of Labridae which has more than 500 species.

The name of the genus comes from the Greek “anacampto” = to bend, because it is a fish with the teeth bent forward.

The name of the species comes from the Latin “meleagris”, which was the name, after Pliny the Old, the Romans were giving to the guinea fowl and from “-oides”, the suffix used in old Greece for saying “similar to”, seen that the brown reddish livery with small white spots reminds that of the guinea fowl.

It is present in the tropical waters of the Indian and Pacific oceans.

We find it, indicatively, from South Africa to the Red Sea and the Arabic Sea, at the Seychelles, Mauritius, Maldives, in India, Sri Lanka, Thailand, Australia, Indonesia, Micronesia, New Guinea, Philippines, Taiwan up to the Ryukyu Islands, south of Japan. Eastward, it has colonized Samoa and the Tuamotu Archipelago.

It is a diurnal coastal species continuously moving along the rocks, the corals and the sponges up to 50-60 m of depth. 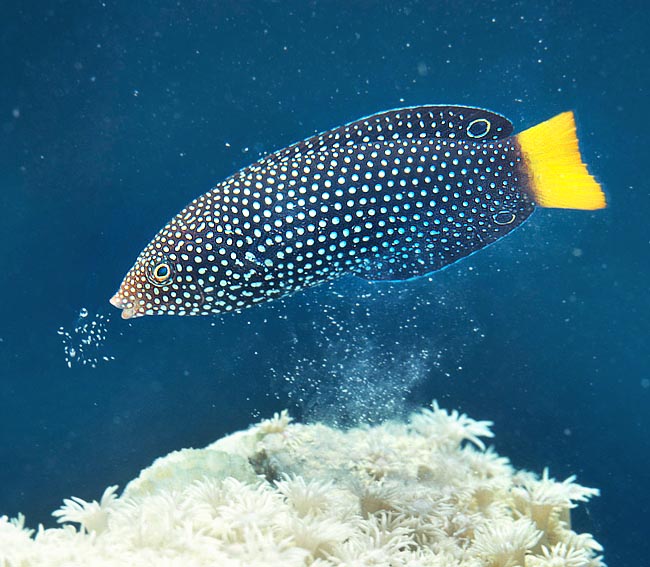 The livery of the females is dark brown, with paler head, a myriad of white dots and the caudal fin yellow, whilst the male has a quite different and much variable colour. In the whole, it is violaceous with the fns more or less orange, especially the caudal, edged, striated and spotted of blue.

It nourishes of small mollusks, crustaceans, eggs and, generally, of all what it can find rummaging through the bottom. Little is known about its reproductive modalities, but it seems that it is, as is the case for many wrasses, a protogynous hermaphrodite species. In case of danger and for spending calmly the night, the spotted wrasse does not hesitate in hiding under the sand.

The juveniles are at times seized for the aquaria market, but bear badly the trip and pass away, mainly miserably. The populations decimated by the events take 1,4-4,4 years for redoubling their number; this species has nowadays a modest vulnerability index, of 30 on a scale of 100.