The Slowworm (Anguis fragilis Linnaeus, 1758) is a saurian amply distributed in Eurasia belonging to the family of the Anguidae.

The name of the genus Anguis is the homonym Latin term of serpent, snake, whilst the specific one fragilis reminds us, always in Latin, that it is a fragile animal, with reference to its ease to lose the tail to escape predators, phenomenon called “autotomy”, frequent in the lizards and other saurians.

The vulgar name is misleading: in fact it is not one-eyed (“orbo” in Italian, hence “orbettino”, its name in Italian) but can see very well in spite of the popular saying “If the viper could hear, if the orbettino could see, few people would be in the world”. It is often mistaken with a snake due to the shape and the absence of limbs, but it is not so! It is a saurian with the long tail equipped, unlikely the snakes, of mobile eyelids.

The slowworm is a much-diffused reptile, common and adaptable, present in Europe and in extra-European areas: from southern Scandinavia to southern Italy, and from France to central Asia, Caucasus and northern Iran. 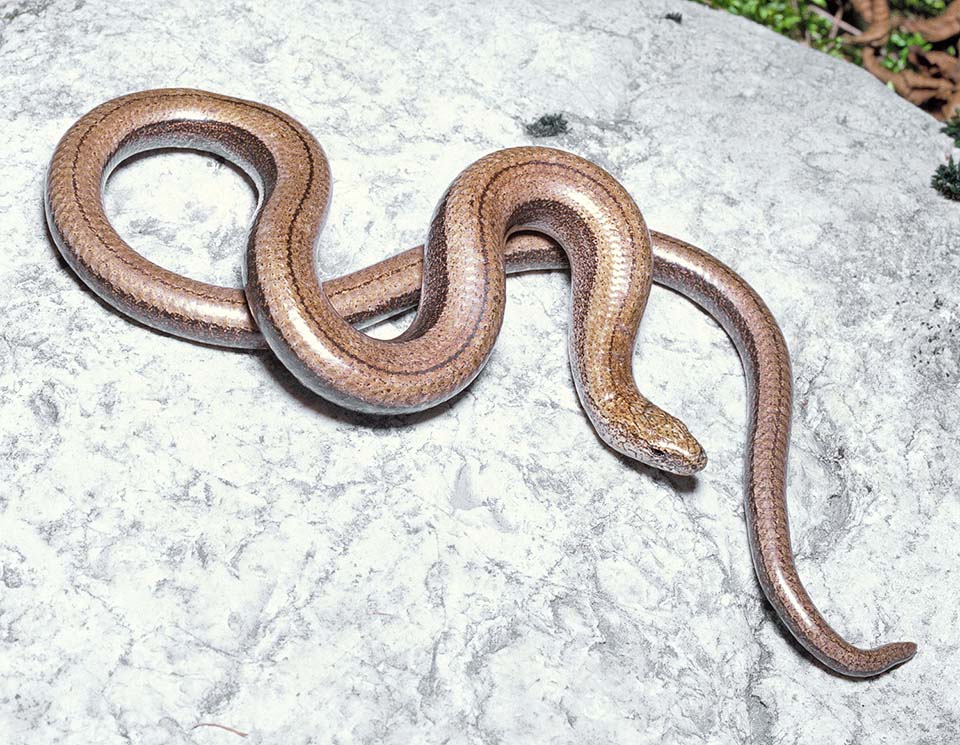 30-50 cm long, without limbs, the Slowworm (Anguis fragilis) could be said to be a small snake, instead is a saurian and like the lizards in case of danger may lose the tail © Giuseppe Mazza

Recently have been recognized, on a genetic basis and on other slight morphological differences, 5 species: the Anguis fragilis present in Europe bur northern Scandinavia, Ireland, Iceland and central-southern Iberian Peninsula, the Anguis veronensis at home in Italy, but Sardinia, Sicily and minor islands; the Anguis graeca typical to central-northern Greece and Albania; the Anguis cephallonica of the Peloponnese peninsula and some adjacent islands, and the Anguis colchica present from eastern Europe up to western Siberia, Caucasus and northern Iran.

The Anguis fragilis is a bashful, terricolous and fossorial reptile found from the sea level up to about 2400 m of altitude.

It is present in many habitats of plain as well as of mountain (broad-leaved trees, coniferous, meadows, country, cultivations and even zones close to population centers); it usually loves ecotones, a good level of humidity and the presence of abundant under-wood. 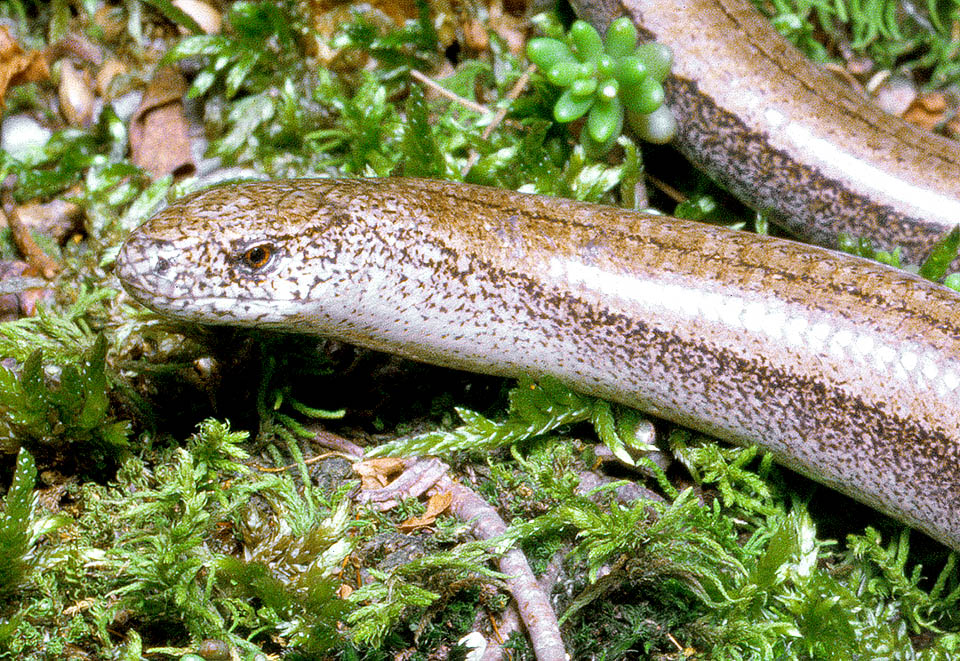 Unlike snakes, it has mobile eyelids. Active in the first hours of the day and in late afternoon, it thermoregulates hidden under objects warmed up by the sun. The Anguis fragilis preys mainly snails and earthworms but also small arthropods that it catches and stuns with a slightly toxic liquid, harmless for the man, present in its saliva © Giuseppe Mazza

In Europe, it is active mainly from March-April to October and in the first hours of the day and in those of late afternoon-nightfall. It loves to thermoregulate not in open air but under objects warmed up by the sun such as stones or artefacts; moreover, it utilizes as den holes previously dug by other animals or, if these are not available, is able to dig quickly its own shelter.

The slowworm is an elongated anguid (30-50 cm), without limbs, serpentiform. The number of scales at mid trunk varies (depending on the species) from 24 to 36.

In the upper parts, the color is pale or dark brown, greyish or coppery; in the lower parts is greyish, brownish or yellowish. The lateral parts are darker, especially in the females where appears also a dark dorsal stripe; in the males presence of bluish spots. In the young specimens, the colors are clearer and shiner, with well evident dorsal stripes and dark sides. 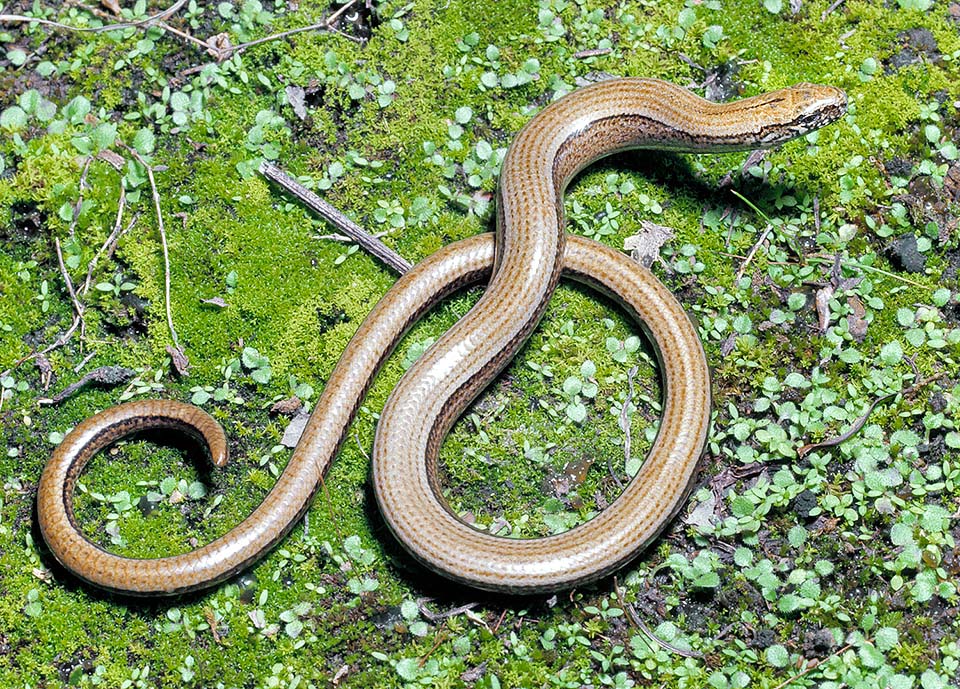 Bashful, terricolous and fossorial, very diffuse with subspecies and analogous species in Europe and Asia, adapts to various habitats, from the sea level up to about 2400 m, usually preferring the humid sites and the under-wood. Every two years, the females, ovoviviparous, generate in full summer, after about 3 months of gestation, 5-25 young © Giuseppe Mazza

The diet is formed mainly by snails and earthworms but also by other small arthropods it catches and stuns with a slightly toxic liquid contained in the saliva (harmless for the man).

It is an ovoviviparous species, with sexual maturity at about 3 years of age and biennial mating for the females. Frequent are the fights between males. In Europe the mating occur usually by late spring, with a gestation lasting about 3 months and delivery in late summer of 5-25 young.