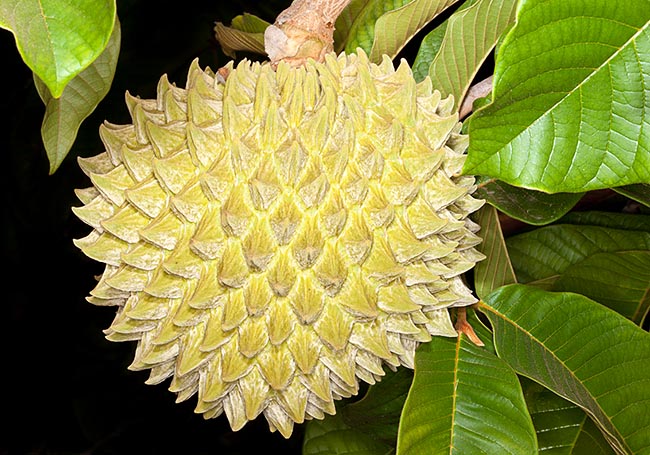 The species is native to Belize, Costa Rica, El Salvador, Guatemala, Honduras, Mexico (Oaxaca, Vera Cruz and Yucatan), Nicaragua, Panama and Venezuela, where it mainly grows in the coastal areas at low and medium altitudes.

After some, the name of the genus comes from the Latin “annona” = nourishment, food, with reference to the alimentary utilization of the fruits, after others, from the local name (in the Tainos language); the Latin name of the species, “purpurea” = purple, refers to the colour of its flowers.

The Annona purpurea Moc. & Sessé ex Dunal (1817) is a deciduous shrub or tree up to 10 m tall with trunk up to 45 cm of diameter, with pale brown-greyish bark, fissured, and expanded crown; the young branches are covered by a thick tomentum of ferruginous colour. It has leaves, on short petiole, alternate, simple, elliptic or oval with undulate margins and pointed apex, 20-30 cm long and 10-14 cm broad, with prominent nervations on the lower page. 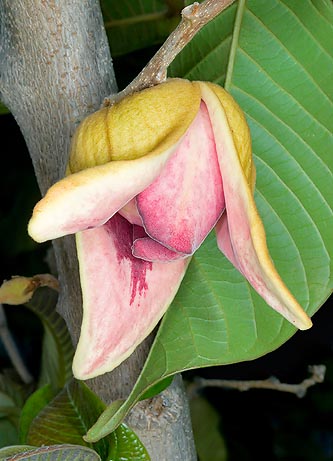 The flowers, which appear on the branches at the same time of the leaves, are solitary, scented, with a corolla formed by six purple pink petals, the three inner ones being 2,5 cm long, the outer ones, 5 cm long and very pulpy.

The fruits are syncarps (a whole of several simple fruits, grown together thus forming an apparently sole fruit), globose, with a diameter of 15-20 cm, covered by a reddish-brown tomentum and with pyramidal protuberances, with a curved apex; yellow or orange, fibrous pulp, very scented, where several elliptic, compressed, about 3 cm long, brown to black seeds are dispersed.

It reproduces by seed, which has a germination capability of a few months, in loam rich of organic substance with addition of sand or perlite, kept humid, at the temperature of 22-24 °C; the germination takes place after 3-4 weeks and the first flowering starting from the fifth, sixth year of age. Species little cultivated for the production of the fruits, of lower quality in respect to that of other species of Annona, it is at times utilized, for the thick and the decorative foliage, as ornamental and as shade tree in parks and gardens. It loves a sunny exposition and warm-humid climate, its cultivation is consequently restricted to the tropical and subtropical zones, where it adapts to an ample variety of soils, provided same are draining as it does not bear water stagnations.

The fruits are locally consumed, as they are or under form of juice, and have a taste recalling that of the mango; the seeds are inedible because containing toxic substances. The wood is used in the country constructions and in the paper production. All parts of the plant, already utilized in the traditional medicine, contain several bio-active substances of remarkable interest in various fields of the medicine; the seeds, reduced in powder, are used as insecticides.