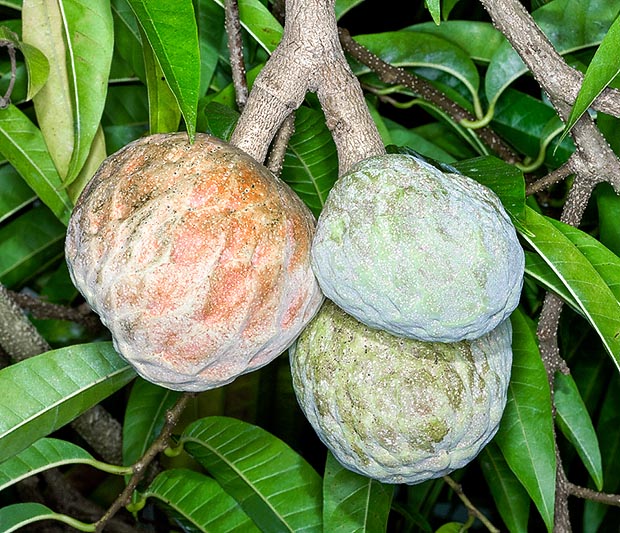 Cultivated since ever, Annona reticulata is probably native to Central America and Caribbean © G. Mazza

The Annona reticulata L. (1753) is cultivated since remote times. Its exact place of origin is unknown, maybe it’s Central America and the Caribbean.

After some, the name of the genus comes from the Latin “annona” = food, nourishment, with reference to the alimentary utilization of the fruits, after others, from its local name (in the Taino language); the name of the species comes from the Latin “reticulus” = small net, with reference to the appearance of the surface of the fruit.

Small deciduous or semi-deciduous tree, with a rather irregular crown, tall up to about 8 m, it shows lance-shaped leaves, long up to 18 cm and 3-5 cm broad, smooth on the upper page and tomentose on the lower one, with a somewhat unpleasant smell. 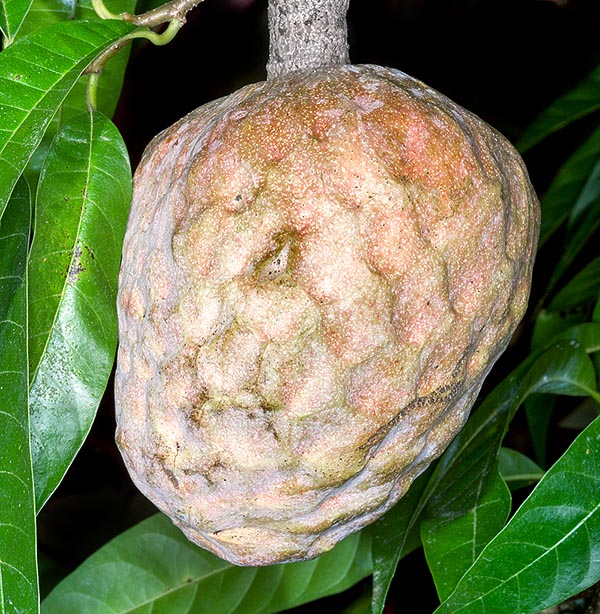 The fruit is an edible syncarp. All parts of the plant have medicinal virtues © Giuseppe Mazza

The pendent, perfumed, flowers appear on the new branches, usually in clusters of three or four units, with a corolla formed by six petals, the three outer ones being pulpy and about 18 mm long, with a pale green colour externally and pale yellow with a purple dot at the base, internally, and the three inner ones being smaller or even absent at times. The fruits are syncarps (a whole of several simple fruits grown at the same time, forming an apparently unique fruit), globose or heart-shaped, 10-15 cm long, with the surface coloured in yellow to reddish brown when ripe, marked by lines forming a reticulation with rhomboid or hexagonal meshes; the pulp, white or cream, is juicy and sweet in the best varieties, of a quality, anyway, inferior than that of the Annona cherimola or the Annona squamosa. The seeds are plentiful, compressed, oblong, of about 10 mm of length, of a blackish, or black, colour. It propagates by seed, the selected varieties by layering or by grafting. Essentially tropical plant in its requirements, it is to be cultivated in full sun, on rich soils, well drained and kept permanently humid; adult plants can bear occasional and short lasting diminutions of temperature up to about -3 °C.

All the parts of the plant have been variously utilized in the traditional medicine. The leaves and the seeds contain substances which have insecticide properties; the sap is irritant and therefore care is needed when cutting the branches.