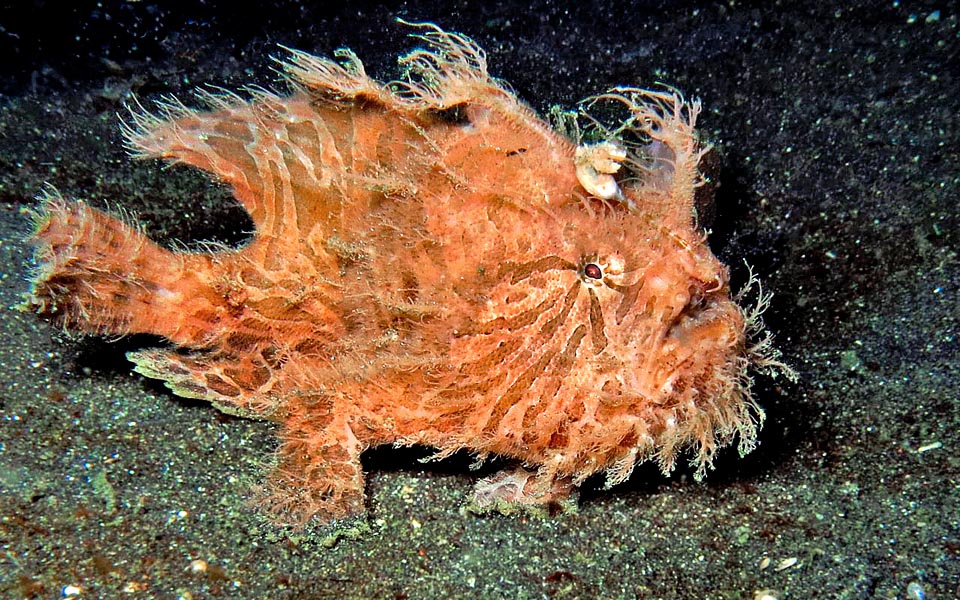 Long even one span, but usually a ten centimetres, the Antennarius striatus has an almost circumtropical distribution © Sebastiano Guido

The Striated frogfish (Antennarius striatus Shaw, 1794) belongs to the class of the Actinopterygii, ray-finned fishes, order of the Lophiiformes and to the family Antennariidae, characterized by a back showing three well developped spines, eyes placed on the sides, big frontal mouth facing downwards and short body, compressed laterally.

The Latin name of the genus Antennarius comes from “amtemna or antenna” (pole, or pennon) to indicate that pole (the illicium) from where hangs a tempting bait. Perhaps the definition tempting is misundertood by those deluded minnows who think that the delicacy is for them: actually, they are the delicacy itself, when they get close, to be eaten in one bite.

The name of the species striatus refers to the stripes the fish displays under its “hairy” look.

The distribution is very vast and includes almost all circumtropical waters of the Indian, Pacific and Atlantic oceans, where it almost reaches Morocco. 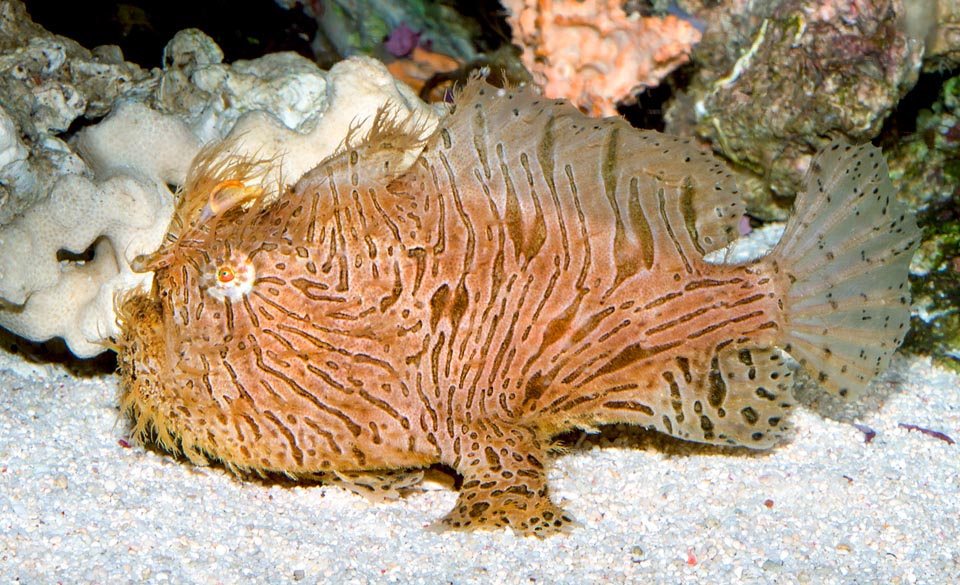 The even if limited presence in the Red Sea, and the increase of the temperature of the seas lead to think that quite soon it will join the large group of  Lessepsian migrants that are increasing the number of the Mediterranean species.

The Antennarius striatus lives in close contact to the bottom, on sand and rubble or hidden among the seaweeds that furnish it an adequate camouflaging. In these environments it love to stay lazily waiting for some unwary fish gets close. It can be seen at depths varying from 10 to more than 200 m, even if the most fishy areas where it loves to stay do not usually exceed the 40 m.

The maximum reported length is of 25 cm, whilst the average met is of just 10 cm. The colours vary abundantly from black to white with a preference for a beige with darker stripes. Also the length of the “hairs”  is variable and is more marked in the males. In aquarium it has been observed to change sometimes colour within a few weeks. 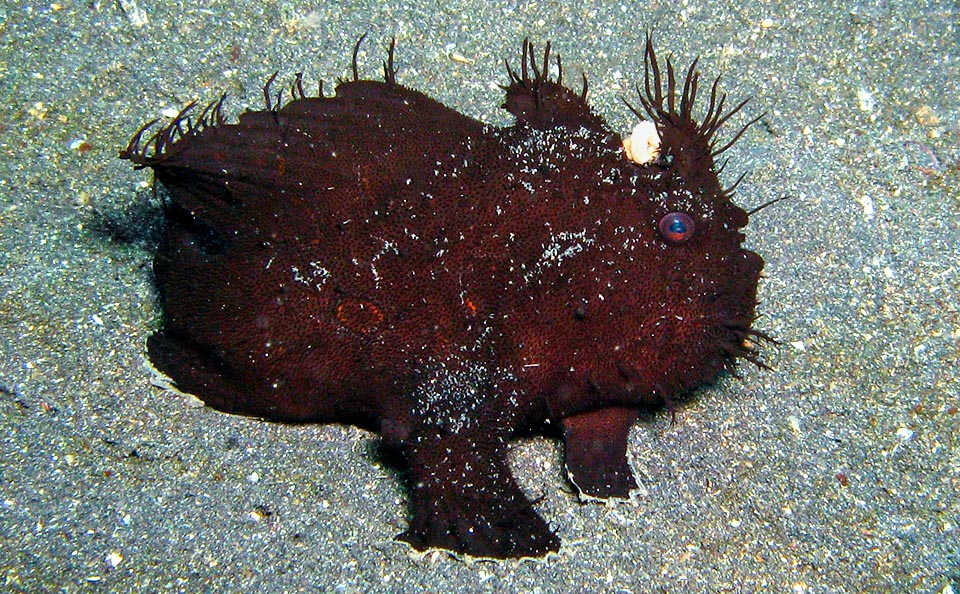 Very dark specimen. It lives in close contact to the bottom between 10-200 m of depth, but the most fishy areas where loves to stay do not usually exceed the 40 m © Sebastiano Guido

The body is short, more compressed on the sides, and presents a very little fish profile, starting from the pectoral fins that, enlarged on the sides and with a characteristic “elbow”  keep it stable even in position of difficult balance. Anyway, the fish must appear solid as a rock or as something else equally harmless if it wants to hope that the food gets close.

The shape of the pectorals may recall the forelegs of a toad and, like these, the webbed part ends with tiny claws.

Also the other features of the animal are quite unusual, starting from the first three spines.

The first one, often stored in a skin fold when not utilized for fishing, has a good mobility and has on the tip an equally mobile wormlike terminal used by the fish for enticing the “customers”. Its name is illicium, from the Latin “illicium”, (lure, bait) and, made to flicker in front the eyes of an hungry small fish, induces this one to follow it until that vertical fissure which is not a broken rock: it is a sinkhole. You may also call it mouth, but has little to do with the common mental image to which we attribute the smile. 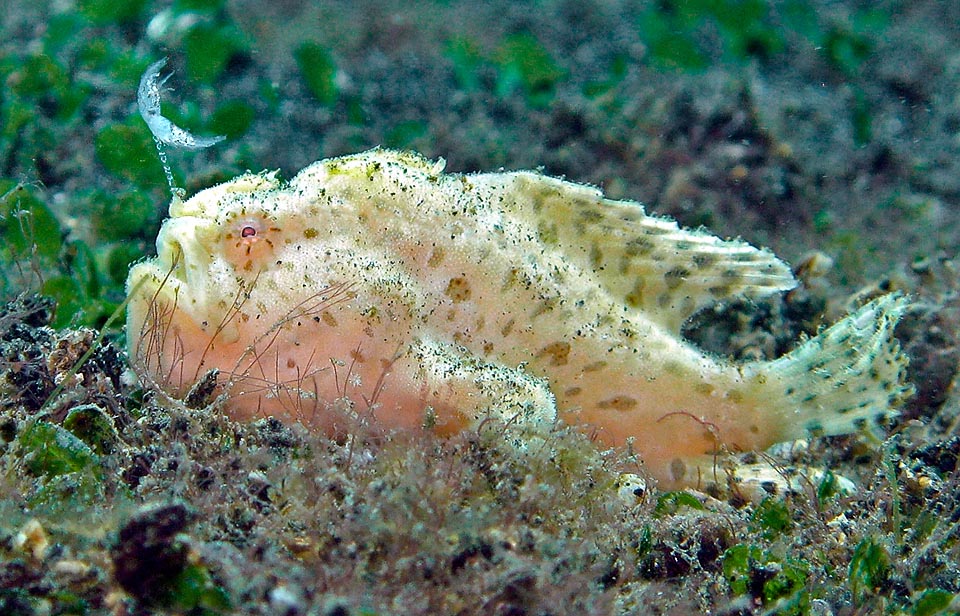 This, almost white, moves the illicium, tempting bait to attract unaware minnows, then sucked by the enormous mouth © Sebastiano Guido

It is a such huge chasm that it can swallow fishes of the same size as the striated frogfish. It opens wide at an incredible speed also everting the mobile jaws and creating a suction so strong to suck up all the water in front to the opening along with the unfortunate fish that was swimming there. A circle of thin teeth will complete the work, holding the big victims that will be gradually dragged inside.

The other two spines, placed behind the illicium are invisible because covered by abundant skin from where, as from the rest of the body, emerge the thin filaments, often like a sapling, that so well camouflage the fish. The dorsal fin, morbid, almost reaches the caudal peduncle followed by the tail, often u-folded in order to grant bigger stability to the posture of the fish. Compared to other frogfishes the eyes are less mimetic and well contribute to the detection of the subject.

It is a greedy animal, able to gulp preys having the same size, usually fishes that are attracted by the wormlike decoy. 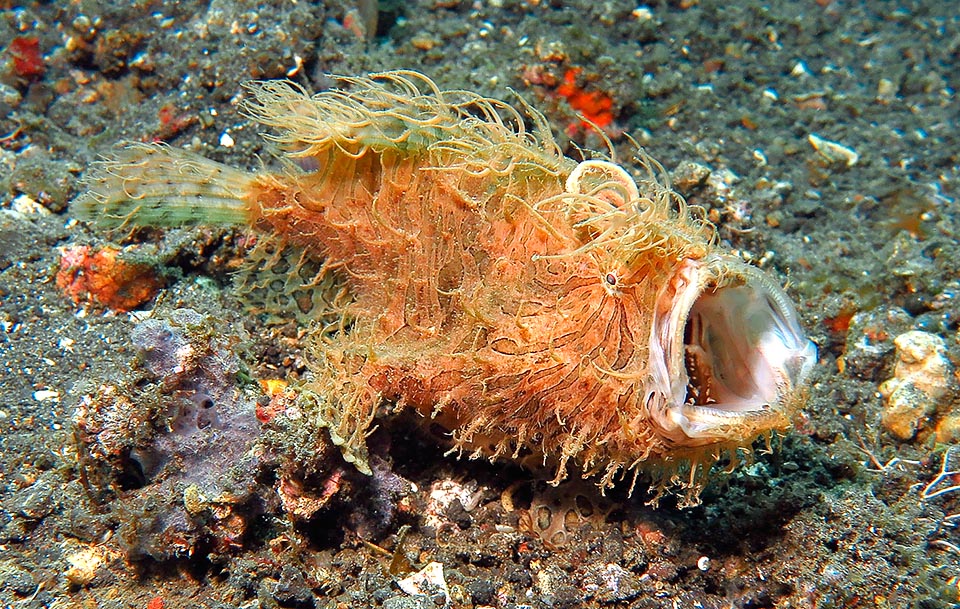 Here wide open. The Antennarius striatus yawns often, probably to re-align the jaws sprained by big preys, seen that it swallows fishes even of its size © Sebastiano Guido

When there is nothing in its vicinity, at times this frogfish moves just in front to the entrance of some den of gobies, bobbing the bait just over or alongside the hole. It moves clumsily on the bottom dragging on the pectorals and avail themselves of the tubular vent of the gills in order to facilitate the movements.

Having no swim bladder, it uses the same jet as a valid help, the few times it is obliged to swim. A characteristic that may be noted every time, when are the yawnings that point out the particular extensibility of the jaws. They have hypothesized that it makes this movement for re-aligning them, seen that they might sprain ingesting very  massive preys.

After mating, the female lays eggs in a ribbon-like sheath or in mass of mucus that will hatch after some days. After having spent a pair of months, the young will lie on the bottom to start their life of deceits and camouflages.

Being the interest of the man exclusively aquariophilous, the species appears menaced only by the environmental degradation.

The resilience is high and the time of doubling of the population is less than 15 months. The vulnerability index is quite low, reaching the rate of 13 on the range of 100. 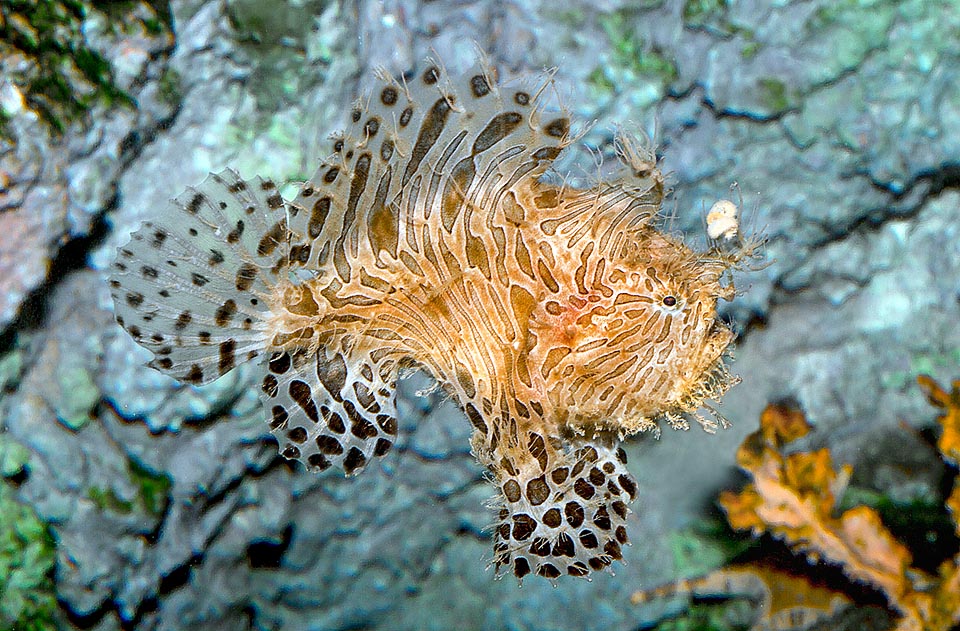 Having no swim blade, the striated frogfishes are surely not good swimmers. The few times they are obliged, they help themselves with the jet of the tubular vent of the gills. Here a young going from a madrepore to another. The elbow-like pectorals are a good help for moving among the corals and anchoring on the bottom, stable as rocks © Giuseppe Mazza