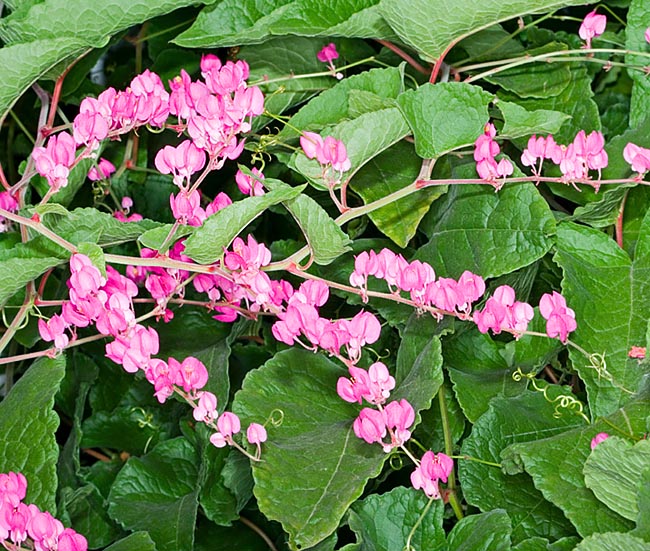 The species is native to Mexico (Baja Sur, Chihuahua, Guerrero, Jalisco, Michoacan, Nayarit, Oaxaca, Sinaloa and Sonora), where it grows in the low deciduous forest, mostly in open areas, up to about 900 m of altitude.

The Antigonon leptopus Hook. & Arn. (1838) is a perennial climbing species, evergreen, with tuberous roots and angular thin stems, herbaceous, at times slightly lignified at the base, up to more than 12 m long with 1-10 cm internodes, which anchors to the supports by means of tendrils placed at the apex of the inflorescences. The leaves, on a 0,5-3 cm long petiole, are alternate, simple with entire or wavy margin, from ovate to sagittate with pointed apex and cordate base, 4-14 cm long and 2-10 cm broad, of intense green colour.

The inflorescences are axillar or terminal racemes, 5-20 cm long, ending in a tendril, carrying numerous hermaphrodite flowers, on a 0,4-0,8 cm long pedicel, with corolla formed by 5 petaloid pink to purple pink (rarely white) tepals, from ovate to elliptic with pointed apex, of which three external, 0,4-1 cm long and 0,3-0,6 cm broad, and two internal, slightly thinner, persistent and accrescent after the fecundation up to 0,8-2,2 cm of length and 0,4-1,8 cm of breadth; the stamina, in number of 8, are fused at the base, for half of the length, thus forming a staminal tube. 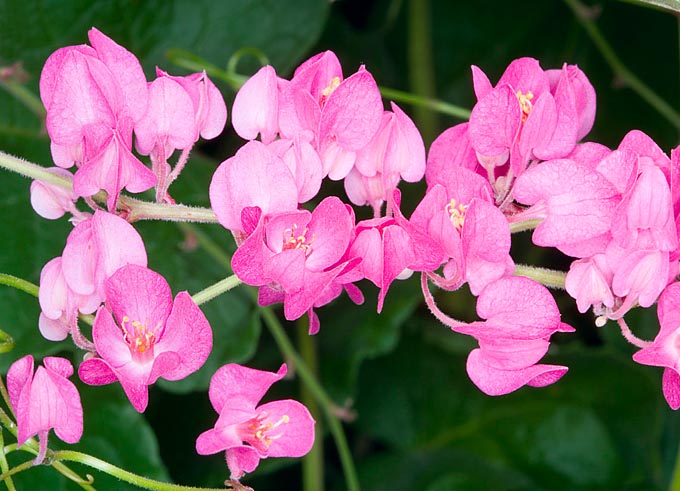 The fruit is a subglobose trigonal achenium with glossy brown pointed apex, 0,8-1,2 cm long, enclosed by the persistant petals, containing one seed only.

It reproduces by seed which germinates in 3-4 weeks at the temperature of 20-22 °C and with which it easily propagates becoming, in favourable conditions, an infester, by root suckers, cutting and layering.

Climber with particularly fast growth and of great ornamental value due to the abundant and brilliant flowering which lasts for a long period in summer-autumn, cultivable in the tropical, subtropical climate zones and marginally, in sheltered position in the warm temperate ones, where often it behaves as deciduous and loses the aerial part with temperatures close to the 0 °C, but growing again in spring from the roots, which may resist, with a good mulching, to values of some degree lower for a short time. It requires full sun and is not particular about the soil, even if poor, and well rooted resists to drought periods, suitable therefore to zones with long and dry summers, of course in such situation regular and abundant waterings ensure an even more vigorous growth. Utilizable as soil cover or climber on trees, pylons, railings and pergolas which is capable to cover in short time.

The tuberous roots are edible and are consumed by the local populations in famine periods.

→ To appreciate the biodiversity within the POLYGONACEAE family please click here.