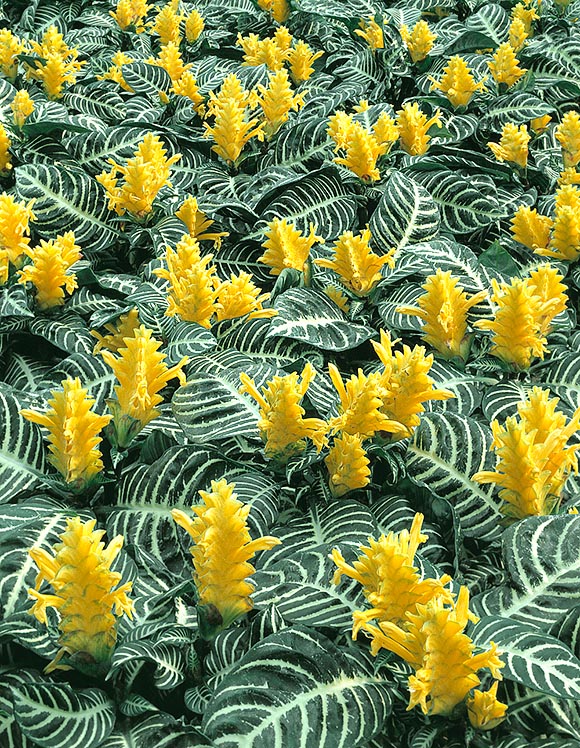 The species is native to Brazil (Minas Gerais, Pernambuco, Rio de Janeiro and Sao Paulo) where it grows in the underwood of the humid forests.

The generic name is the combination of the Greek adjective “αφελής” (afelés) = simple and of the substantive “ἀνήρ, ἀνδρός” (aner, andrόs) = male, man, with reference to the anthers formed by only one lobe; the specific name is the Latin adjective “squarrosus, a, um” = rough, of unclear reference.

The Aphelandra squarrosa Nees (1847) is an erect evergreen shrub, compact, that in nature may exceed the 2 m, but that in the plants cultivated in pot for inner spaces rarely passes the 50 cm, with fleshy stems and simple leaves, opposite, oblong-elliptic with entire margin and pointed apex, 20-30 cm long and 8-10 cm broad, of dark green colour with ivory white nervations, coriaceous and glossy above.

It reproduces by seed, micropropagation and by apical cutting, 10-15 cm long, in spring, placed in aerated and draining loam in shaded position, at the temperature of 22-24 °C, with high humidity that can be obtained, at amateurish level, covering the pot with a transparent plastic bag until when the buds appear, sign of the successful rooting.

One of the most appreciated species, with its horticultural varieties, for the decoration of inner spaces, thanks to the ornamental foliage as well as to the bright inflorescences, but of not really easy cultivation. It needs a very luminous position, also for stimulating the blooming, but not at direct sun, far from air currents and from heat sources, and well draining, acidic or neutral, soil, maintained constantly humid, but without stagnations, the too dry or too wet loam causes the loss of the leaves. 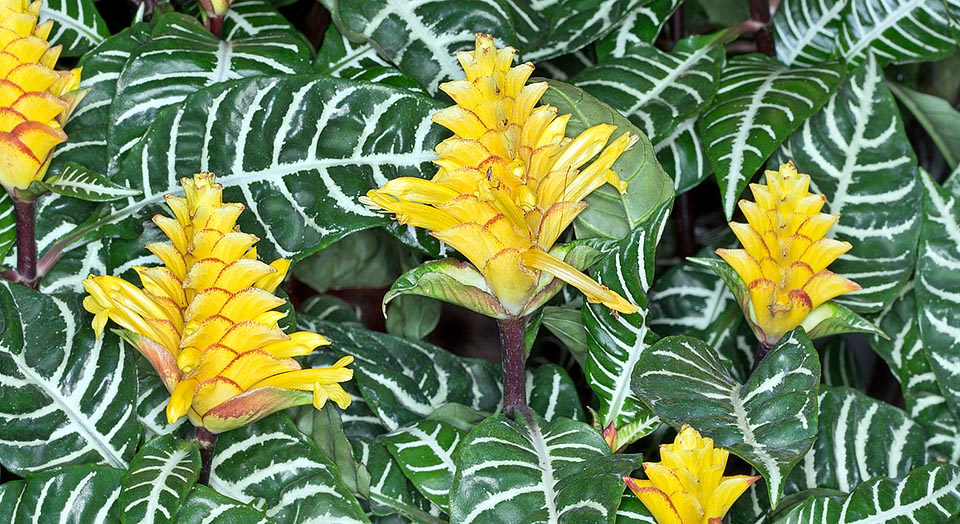 Decorative leaves and showy 6-15 cm inflorescences lasing 2 months. No surprise that it is a known houseplant, even if, then, not easier © Giuseppe Mazza

It requires high temperatures, over the 18 °C, only after the blooming a short period of rest may be given, with slightly lower temperatures, but not under the 14 °C, and waterings, to be always done with non-calcareous water and at ambient temperature, less often, but never letting the substratum dry up. Moreover, it requires high ambient humidity, over the 60%, difficult to obtain in a flat, in order to increase it recourse may be done to frequent nebulizations with non-calcareous water at ambient temperature, also to avoid unaesthetic spots on the leaves, or placing the pot in a wide saucer full with expanded clay or gravel with a layer of water not at direct contact with the bottom of the pot. Useful is after the blooming a topping to favour the growth of new branches.