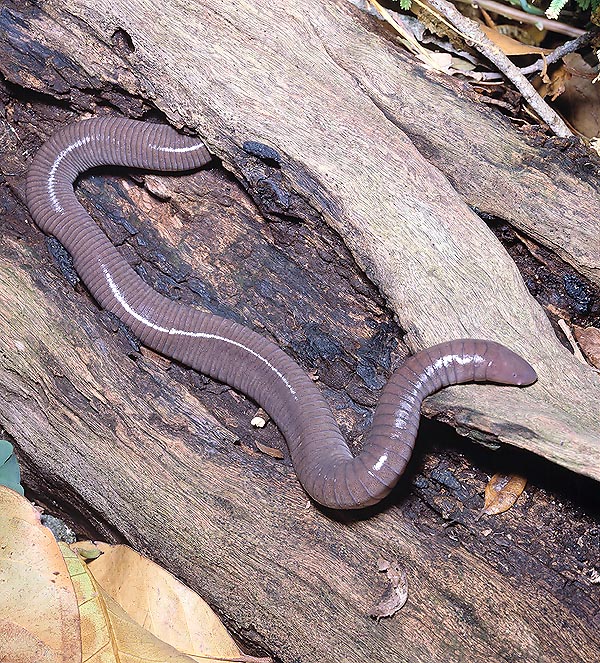 If in the endless class of the Amphibians (Amphibia) we count the number of the genera and of the species, for importance, after the Anurans (Anura) and the Caudates (Caudata or Urodela), we find the order of the Apodes (Apoda) in the past called also by some zoologists Gymnophiona or Caecilians (Ceciloforma).

A very small and less variegated order, after the most recent visions of the zoological taxonomy of the International Commission for the Zoological Nomenclature (ICZN), which is also one of the less studied. About the biology, ecology and zoogeography of these odd amphibians, we have in fact unluckily, only fragmentary information.

The word Apoda comes from the ancient Greek and means limbless. And, in fact, the members till now known to the biology are all devoid of the forelimbs as well as of the hind ones, and both are not even sketched. The apodes have a defined structure, depending on the dimensions, serpentiform, for the biggest ones, or lumbriciform, for the smallest members. The great German biologist A.E. Brehm, defined them in 1840 as follows: amphibians resembling to the serpents outside and to the frogs inside.

The order of the Apoda is formed by one only family: the Caecilians (Caeciliidae), totalling almost 167 species, even if for the 90% of the cases only the outer morphology is just known, and nothing definite is known about their physiology, reproductive biology, alimentary ecology and auto-ecology. In zoogeographical terms, their presence, up to now, results mapped from South America to the Seychelles Islands, up to tropical and south-eastern Asia.

Usually, they have big “mucous” glands on the belly, with which they emit a viscous substance which keeps the skin wet, thus facilitating the creeping, their type of locomotion on the ground. They have from 75 and 273 vertebrae, and have some small tentacles on the sides, close to the eyes. The fecundation appears to be internal, for the most studied species, but all this is to be verified. Some are “ovoviviparous”, they emit, that is, eggs which open after a few moments, as soon as laid, with the young next to the completion of the development. Others, “viviparous”, deliver already formed young, through a primitive uterus, and a small group of “oviparous” reproduces by indirect way, with metamorphosing larvae which get out from fecundated eggs, laid and incubated under the earth.

They do not have, as we have said, the fore and hind limbs and the “pectoral-pelvic” girdles. In the past, the herpetological biologists defined their morphology as “amphisbaenic”. The skin, smooth and barren, is adhering to the body, and is rich of “muciparous” glands. The tail is quite reduced or is completely absent, seen that its willowy structure is ensured by the whole of the body. The caecilians, the members of the family of the Caeciliidae, have hollow teeth, all alike, inserted in the inner part of the jaws, with the point turned back, for avoiding the escape to the seized preys, which may be an earthworm, a crustacean, a small mollusc, or a small fish, which they swallow without chewing.  The tongue is stuck to the lower mandible for the whole length and therefore is not extensible. The teeth are often located also on the palate, and are placed there as a horseshoe forming a “U”. 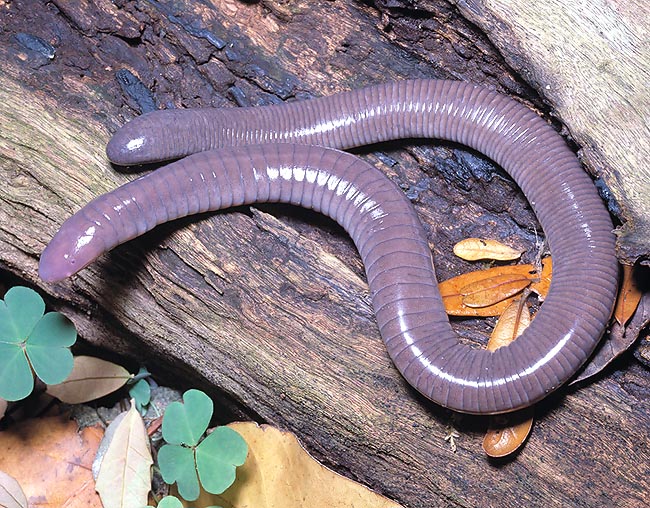 Dermophis mexicanus lives undergound hunting insects and earthworms. Gets out by night and when rains © Mazza

The hyoid bone is formed by three pairs of arches, which lead to think to the existence of branchiae at the primordial stage of development, and then reabsorbed, at least for those species producing metamorphosing larvae. The external nares are placed on the sides of the head or at the extremity, and the inner ones penetrate the palate.

They eyes are completely absent or are hidden under the skin of the skull, and therefore are unsuitable for seeing. At times we can see, in the nasal region, a small hole or a small protractile antenna. Its function is still unknown, but for some biologists it might be a receptor which replaces the eyes.

Nothing in these animals is shaped more strangely than the head: the maxillar bones cover the eyes, whereas the temporal ones, united in one only bony segment, generate a shield shaped structure, necessary for digging. The dorsal vertebrae are concave at both extremities, united by means of a cartilaginous plate inserted between the two vertebrae. The ribs are rudimental, the sternum, the pelvis and, obviously, the limbs, are missing completely. They have one lung only.

In the various areas of the American and Asiatic continents where they have been sighted, the caecilians carry an underground life, like the earthworms, and are therefore difficult to find. When on the ground, they creep slowly, whilst when in water, they swim like the serpents, waving laterally with the whole body. They nourish of flatworms, annelids, terrestrial oligochaetes, as well as of small crustaceans and molluscs, and, in the bigger species, also of small fishes and other vertebrates; they also like vegetal substances and even some fungi. Among the best known species stands the Panamanian caecilian (Caecilia ochrocephala, by some authors called also Oscaecilia ochrocephala), of 22-30 cm of length. As the name suggests, this species lives in the state of Panama, in the region of the gulf of Urabà, in Colombia, and in the north-western part of this nation. Its preferred habitat is formed by the humid soil in the low tropical areas and in the wet plantations, like the paddy fields. Active during the night, they rest during the day in shady and humid locations.

Another species is the Frail caecilian (Caecilia gracilis, once called Caecilia lumbricoidea), up to 60 cm long, of a dull grey-brown colour. It has the shape of an enormous earthworm, subdivided in rings in the rear part of the body. Eyeless, it usually lives in the decaying humid foliage, carrying a mainly nocturnal life. It is found in French Guyana, Dutch Guyana (Surinam), in Brazil, Peru and, maybe, also in Colombia. 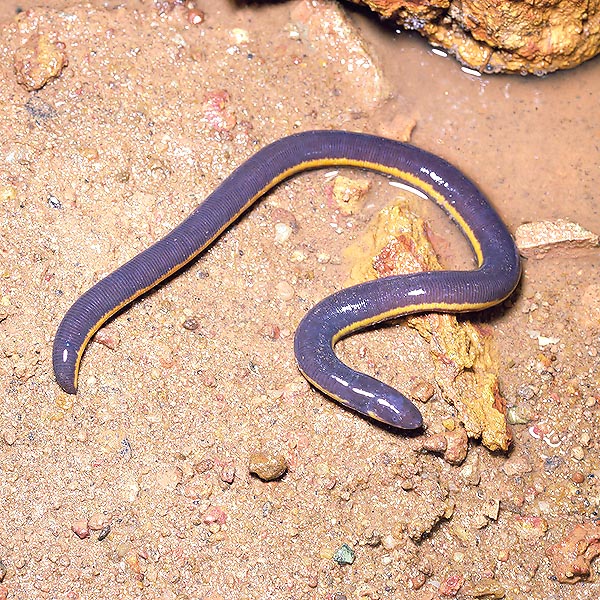 The Dermophis mexicanus, ovoviviparous, is common in Central America, from Mexico to Nicaragua, and has an analogous ring-shaped structure. The eyes are well visible, with, close to them, a globular tentacle; it also goes hunting in the humid underground and among the decaying leaves, getting out only by night or during the rainy days.

A particular species is the Ceylon caecilian (Ichthyophis glutinosus), called also amphibian fish-serpent, with a length varying from 30 to 50 cm. It lives in the humid zones (swamps, lake zones and water streams) of Indochina, in Sri Lanka, in southern India and in South America.

During the eighties, several zoological biologists have observed some specimens of them in the humid zones of central Africa and in those of the Seychelles.It has a brown body, or with metallic-bluish reflections and a yellow longitudinal band running over the body along the sides.

It is a species with nocturnal life, of it is known only that it lays eggs (oviparous), under a layer of humid land, and that it controls the eggs along the whole incubation. Compared to the other apodes known till now, it has a more varied alimentary ecology. As a matter of fact, even if it nourishes mainly of insects, it attacks and eats also vertebrates, like small rodents and lizards.