Aquarium turtles : from prehistory to the drawing-room

From prehistory to our homes. How to look after turtles in an aquarium. 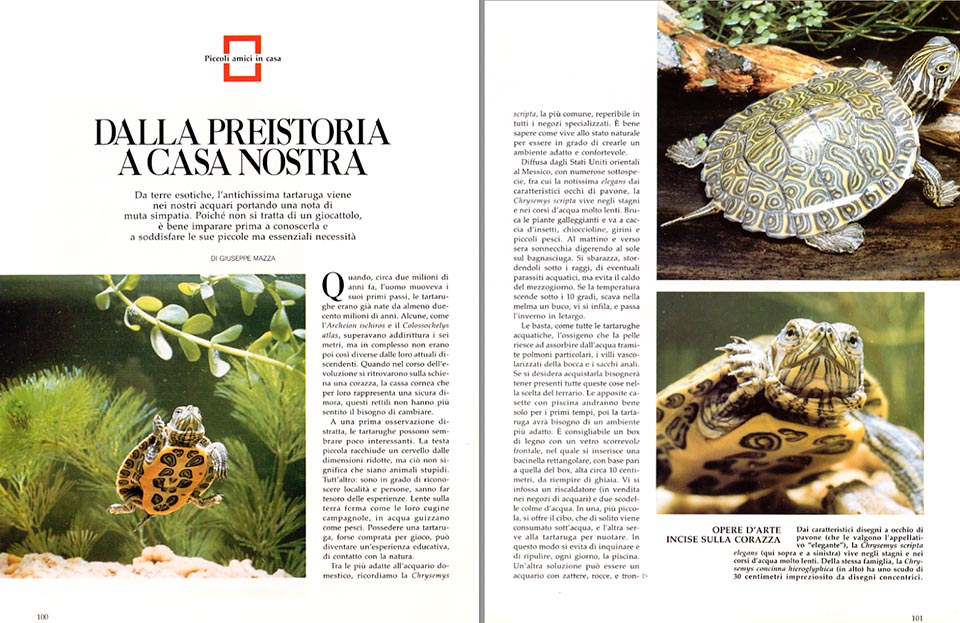 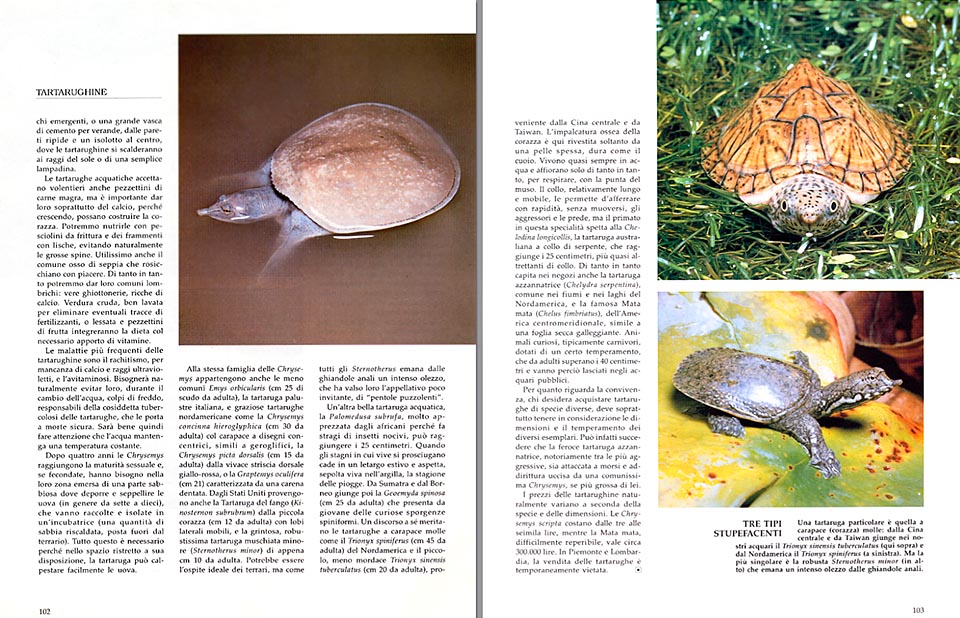 When, about 2 millions of years ago, man was just born, turtles were already at least 200 millions years old.

Some of them, like the Archelon ischyros and the Colossochelys atlas, were bigger than 6 metres, one was dentate, but, in the whole, they were not too much different from the present ones.

I have seen a hungry jaguar, mocked by a turtle, which, laid the eggs, was going calmly back to the sea, without worrying too much for the sharpened teeth and claws of the embarrassed feline. It’s a serious mistake to under estimate the real worth of the testudinates, and, when observing them, we understand that even if they have a very small brain (some species can survive even for one month after the removal of same), are more intelligent of what, at sight, can appear.

They recognize places and persons, and make a good treasure of the experiences done. So, we discover that, instead of being slow, aquatic turtles dart in the water as fast as fishes, and that the terrestrial ones cover enormous distances.

Common sayings appear untrue, false like the famous sophism of the Greek philosopher Zeno, who was of the opinion that the fast foot of Achilles would have never overtaken the turtle which was running before him. All ancient civilizations, however, have always praised the behaviour of these animals. In the African sagas the wisdom of turtles wins against the dull stupidity of the hippopotamus, and in Asia, for their longevity and their ardent love, these animals are the true symbol of the joy of life.

A turtle at home, may transform, then, from a toy to an educational moment of thinking, of contact with nature.

In order that our conscience doesn’t prick us, because the little water turtles don’t die, as usual, silently, abandoned in a balcony or in a corner, we must, therefore, know them.

We begin with the extremely common Pseudemys scripta, sold in all the shops of aquaria. How many do know that it can live for tens of years, that it feeds also of vegetables, and, once adult, can reach the 30 cm ?

Spread out from western United States to Mexico, with various sub-species, among which the very well known elegans, with the typical “peacock eyes”, it lives in the ponds and in very slow water streams.

It browses the floating plants and hunts insects, small snails, tadpoles, and small fishes. In the morning, and about evening time, it dozes on the boat-topping, digesting under the sun. It gets rid of possible parasites, drying up, but avoids the heat of noon time. If the temperature drops down under 10°C, it digs a hole in the mud, goes inside, and spends the winter in profound sleep. It is satisfied, like all aquatic turtles, of the oxygen absorbed by the skin, by the vascular villi of the mouth, and, above all, by the special “anal pouches”, which, covered with finely irrigated tissues, form a sort of “aquatic lung”.

When choosing a terrarium, you shall have to keep in mind all these things. The special “little house with pool” in plastic, will do for the beginning, but later on your turtle will need a more suitable accommodation. If you think to a box in wood, with in the front a gliding glass, I suggest to make it of the size of a rectangular basin, about 10 cm high, to be filled with gravel. You will bury there a heater and two bowls full of water. In the smaller one, you will offer the food, which usually is eaten under water, and the other one will be used by the turtle for swimming. In this way, you will avoid to pollute and clean, every day, the “pool”.

Another solution can be an aquarium with rafts, rocks and floating trunks, on a big concrete pool for verandas, with steep walls, with, at the centre, an islet, where your little guests will warm up under the rays of the sun or those of a lamp.

Aquatic turtles accept willingly small pieces of lean meat, but, above all, it is important to give them some calcium, because, while growing up, they must build up the carapace.

Instead of costly fillets, which can be eaten by us, we shall give them, therefore, small fishes good for frying or some fragments with bones, avoiding, of course, the big ones. Very useful is also the habitual cuttle-fish bone, which, normally, they chew with pleasure.

From time to time, if we love them, we shall look for common earth-worms: veritable delicacies, reach of calcium.

Raw or boiled vegetables, well washed to avoid the accumulation of insecticides, and small pieces of fruits, will complete the meal, with the required input of vitamins.

The most frequent disease of the little turtles are in fact the rickets, due to deficiency of calcium and of ultra violets, and the avitaminosis. We shall, obviously, avoid them also cold strokes, responsible of the so-called “tuberculosis of the turtles”. Specimen affected do not eat any more, keep afloat with the body oblique, and are irremediably lost.

When our Pseudemys will be adult, after four years, they will need also an emerged area, sandy, where to lay and gig the eggs (normally 7 to 10), which we shall have to pick up and put, under sand, in an incubator (realisable with a thermostat regulated to the minimum, or a plain heater for terrariums).

If we do not feel to do all this, then it will mean that, for us, the turtle is just a knick-knack, and consequently, it will be better to leave it at the dealer’s and take one in pottery or in silver.

To the same family of the Pseudemys, with similar needs, belong also the Emys orbicularis (25 cm), the Italian marsh turtle, and many very charming north American ones, like the Chrysemys concinna hieroglyphica (30 cm), with the carapace decorated by fanciful concentric drawings, resembling to hieroglyphics, the Chrysemys picta dorsalis (15 cm), with the lively yellow-red dorsal stripe, and the Graptemys oculifera (21 cm), characterized by the notched bottom.

From the U.S.A. come also the Eastern mud turtle (Kinosternon subrubrum), with the small carapace (12 cm), with articulated lobes, which can be closed in the front and also behind, and the ugly, very sturdy, Loggerhead musk turtle (Sternotherus minor), of only 10 cm.

Another nice aquatic turtle, the Pelomedusa subrufa, very appreciated by Africans, because destroys the diptera, reaches the 25 cm. When the ponds where it lives, dry up, it falls in a summer torpor, and awaits, buried alive in the clay, the rainy season.

From Sumatra and Borneo, comes then often the Geoemyda spinosa (25 cm), which exhibits, when young, some funny, thorny projections.

A particular treatise deserve the turtles with tender carapace, such as the Trionyx spiniferus (45 cm), of north America, and the small, less sharp, Trionyx sinensis tuberculatus (20 cm), coming from central China and Taiwan.

The osseous structure of the carapace is here covered only by a thick skin, as hard as leather. They live, almost all the time, under water, and come to the surface, only from time to time, for breathing, with the tip of the muzzle. The neck, rather long and mobile, allows them to catch with rapidity, without moving, the aggressors and the preys, but the “record” in this “speciality”, belongs to the Chelodina longicollis, the Australian Common snake-neck turtle, which reaches the 25 cm, plus almost the same for the neck.

From time to time, arrives in the shops also the Common snapping turtle (Chelydra serpentina), common in rivers and lakes of north America, and the famous Mata mata (Chelus fimbriatus), of central-southern America, resembling to a floating dried leaf. Odd animals, typically carnivorous, endowed of a certain “temper”, which pass the 40 cm, and therefore, are to be left, at least when adult, to the public aquaria.

Aquarium turtles : from prehistory to the drawing-room was last modified: May 23rd, 2019 by Giuseppe Mazza