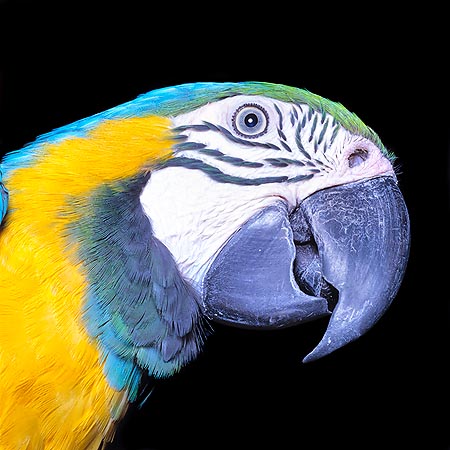 The Ara ararauna can even live 70 years © Giuseppe Mazza

The Ara ararauna Linnaeus, 1758, is a bird belonging to the order of the Psittaciformes, family Psittacidae, genus Ara. The members of this genus are, among those of the class of the birds (Aves), those having the most beautiful plumages all over the planet. Probably, only those of the family of the birds-of-paradise (Paradisaeidae) can compete with them in beauty.

The Ara ararauna, commonly called yellow blue ara, for the prevailing colours of its feathers, is called also Blue-and-yellow Macaw, or Blue-and-Gold Macaw in English, Guacamayo azulamarillo in Spanish, Ara Bleu in French and Ararauna in German.

Scientifically, there is also a synonym used to identify it, which is the Psittacus araraunus of Bechstein, 1811. There is one species resembling to Ara ararauna, which does not have a sufficient quantity of morphologic analogies and a percentage of differences such as to permit to consider it as one of its races or subspecies. This is the Ara glaucogularis (Blue-throated Macaw), living in the same biotope, that is, the pluvial, tropical forest and the plains. The Ara glaucogularis has similar colours (as form and distribution) to the Ara ararauna, but differentiates as it has a completely blue chin.

The Ara ararauna has a rather wide distribution in the world. It can be encountered in the eastern parts of Panama and Colombia, all over French Guyana, in south-western Brazil, eastern Ecuador and Peru, north-eastern Bolivia and in most of Argentina. However, similarly to the other species of the genus Ara, it is nowadays present in most of the world, both North and South the Tropics of Cancer, as many specimens are kept in Zoological Gardens, Zoo-Safaris, Aquatic Parks and Zoo-Parks. It has been calculated that there are 1.005 of them in 250 of these structures and that 16 births have taken place during the last 6 months, which is not so simple, seen the difficulty of reproducing in captivity.

Their natural habitat is that of the pluvial and tropical forests where they live on the branches of the trees, being provided with a zygodactyl foot allowing them (having the first and fourth finger bent backwards and the second and third directed forward) an arboreal life; they can come down to the ground very rarely for nourishing of seeds fallen down, but their way of walking is awkward, as they are not digitigrades. 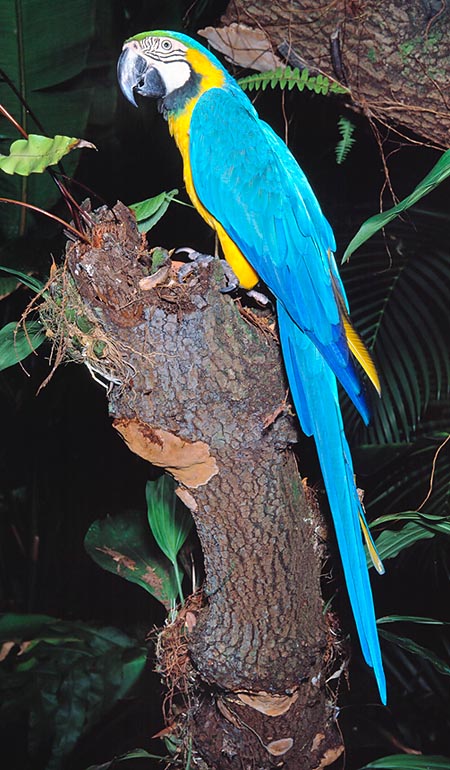 Thanks to its long tail, the Ara ararauna reaches the 90 cm © Giuseppe Mazza

Often they are seen on palms, or also on trees of deciduous forests and also in the lowlands (Argentine Pampas), up to 500 m of altitude. They are frugivorous, granivorous, phytophagous. They eat both fruits with morbid or hard pericarp, seeds, wild graminae, buds which characterize their alimentary ecology. In the wild, usually, they live in numerous groups close to the watercourses. When captive, they need spacious aviaries and robust, tall up to 2 metres, 2 broad and 4 long, roosts.

They have a very long tail, but, totally, the length head-tail does not exceed the 90 cm. Like all genus Ara species, there is a plumage called at Dyck texture, which gives its characteristic colourations and geometries. Bright blue on the back, wings (the great and small coverts), the occipital part of the head, whilst the remaining part if bright green. The thorax and the belly are yellow, the tail (the great rectrices) are bright blue, but under these ones, we can see yellow feathers in the inner ventral part. The bill (from which its alimentary ecology depends), like all other species of the genus Ara, is robust, curved and black. The superior semi-portion is mobile as regards to the skull, inside the mouth lays the short and thick tongue (which is eaten by the Amazonia natives), and there is a white-black striping in the part of the muzzle between the point of connection of the bill (base) and the eyes. The iris in both sexes is yellow, brown in the pullets before their sexual maturity.

It can reach the weight of 1 kg and can live until 70 years. As the Dyck texture does not determine a sexual dimorphism, neither geometric, nor chromatic, to which we have to add the absence of diversities in other biometric aspects in the two sexes of all the species of the genus Ara, the sex can be determined either by molecular way, through analysis of the DNA of the feathers (usually the coverts), or through analysis of the karyotype, or through laparoscopy, which finds the presence of the testicles or of the ovaries, when the sexual maturity has come.

As the rainy season is not well marked in the pluvial forests, raining all over the year, these birds, as regards to the other Psittaciformes, autochthonous in zones where the rainy season has a well marked beginning and completion (like in Africa), do not have a specific reproductive season. The male builds its nest inside the cavities of trees, at remarkable heights, where the female will lay down 2 eggs for each clutch. The pullets remain with the mother, which will bear the parental cares, whilst the father will think to nourish both of them for about one month. Then they become autonomous in the flight and in the research of food, but usually they do not go too far away from their parents.

The young of the previous clutches, to say the truth, seem to be well tolerated close to the nest, as they can help the mother and the father in breeding their brothers. In the wild, the density of population till about twenty years ago was constant. Recently, the pollution due to utilization of herbicides, pesticides and of anti-cryptogamic products in agriculture, associated with an intense deforestation, has dramatically rarefied its range, decreasing dangerously the population. For these reasons, the IUCN has inserted them into the red list of the Threatened Endangered Species and the CITES forbids their traffic for commercial purposes. 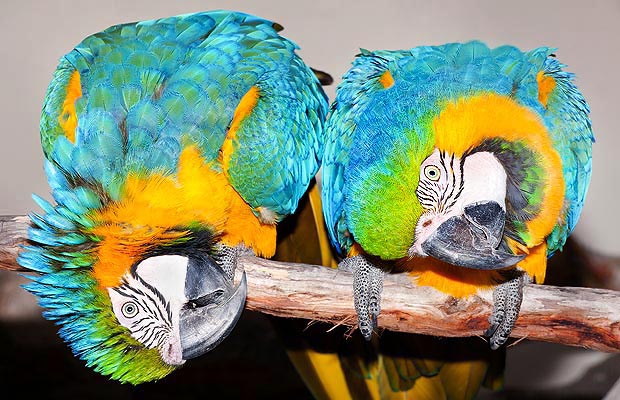 Even upside down world is always nice, and the cute Ara ararauna is present in all zoos © Giuseppe Mazza

In the mean time, as it happens for many other species of animals, the programmes of the conservation biology, in the context of Zoological Gardens, Zoo-Parks, Aquatic Parks, Zoo-Safaris and natural Parks, are contributing greatly to their protection. Also because they reproduce in captivity in a good percentage. They are nowadays extinct in Salvador, Honduras and Nicaragua.

The Corcovado national park in the Osa peninsula, south-western Costa Rica, is, without any doubt, the most important protected natural reserve for this species.