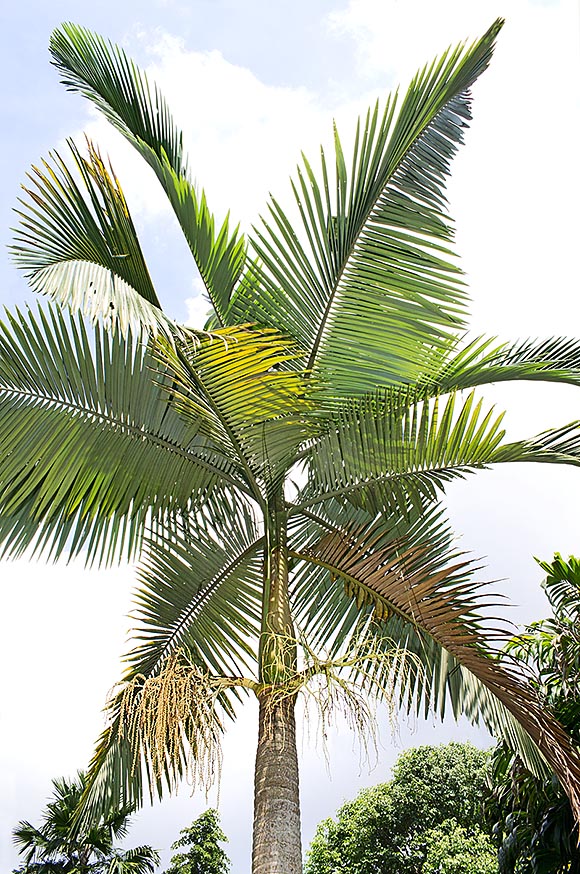 The species is native to Australia, where it grows in the peninsula of Cape York, Queensland, in the pluvial forest up to about 500 m of altitude.

The name of the genus is the combination of the Greek substantive “archon, -ontos” = chief magistrate and of the name of the palm Phoenix; the species is honoured to the Australian horticulturist and collector Robert James Thomas Tucker (1955-1992).

The Archontophoenix tuckeri Dowe (1994) is an unarmed monoecious species with solitary stem up to 20 m tall, slender, of about 25 cm of diameter, enlarged at the base, on which are visible the rings trace of the attachment of the fallen leaves, and green internodes tending to grey and to fissure with the age.

The leaves are pinnate, up to about 3 m long, with oblong pinnules having pointed apex, up to 90 cm long and 4-5 cm broad, arranged regularly along the rachis, of intense green colour on the upper page, silvery grey below due to the presence of microscopic scales. The foliar base, smooth, waxy, of pale green colour, wraps wholly the stem for a height of 0,8-1,3 m, with a slight swelling in the lower part, forming a sort of an elegant capital.

The panicle inflorescences generate under the leaves, enclosed during the initial phase of growth in a spathe of pale green colour, deciduous, are 30-60 cm long, initially erect, then drooping in fruit, with 3 orders of ramifications and unisexual flowers united in groups of three (a female flower amidst two male ones) of cream white colour.

The fruits are ovoid, 1,5-2,5 cm long and of 1-1,5 cm of diameter, of bright red to brick red colour when ripe, with mesocarp formed by two layers of fibres, containing only one brown globose seed of 0,9 cm of diameter. It reproduces by seed which germinates easily in 1-3 months at the temperature of 22-24 °C.

It is a fairly fast-growing species of great ornamental and landscape effect, as isolated specimen as well as in groups, due to the slender stem and the elegant crown. Cultivable in the tropical and subtropical climate zones, its cultivation may be tried marginally in the temperate-warm ones where temperatures little under the 0 °C are rare events and of very short duration; it requires full sun, or slight shade when young, and is not particular about the soil, but better grows in the fertile ones regularly and abundantly irrigated during the warmest months. Young specimens may be used for the decoration of inner spaces in very luminous position.