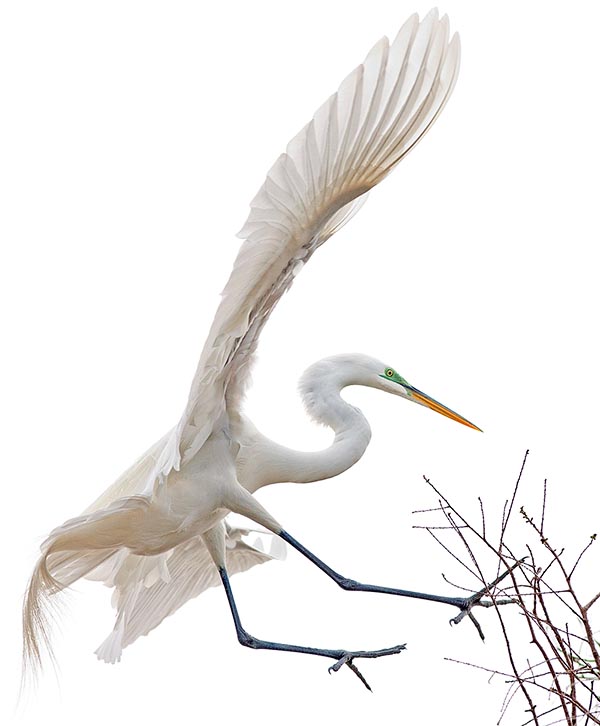 The Great white heron (Ardea alba) is a bird of rare elegance, present in almost all world © Giuseppe Mazza

The Great white heron (Ardea alba Linnaeus, 1758) belongs to the order of the Pelecaniformes and to the family of the Ardeidae and in the European continent is the biggest member of this family.

Even if the ardeids are seen as birds very similar to the storks, extensive studies have found that there are greater genetic connections with the pelicans and therefore the present scientific classification assignes them to this order.

Furthermore, as frequently is the case in the ornithological world, also this bird has been interested by a reclassification of the genus to which it belongs and so presently it is often plaved in the genus Casmerodius though maintaining the synonim Ardea originally assigned by Linnaeus.

At a distance easy to be confused with the little egret (Egretta garzetta) due to the almost similar features, it is also easy at a closer look to understand the greater size, almost double and consequently to determine its species.

When flying, it then becomes unmlistakable due to the rather slow and elegant wing beats, with deep beats and often deliberately more slowed such to create strong doubts on the possibility it may stay in the air. Like all ardeids, when flying keeps the neck between the shoulders thus assuming the typical S position. In the tropical regions where the range is overlapped, it is often confused with the Intermediate egret (Mesophoyx intermedius) that is similar in every detail but in the line of the mouth fringe that in the great white heron exceeds the eye whilst in the intermediate it stops at about in the mid of the ocular globe. In North-Mediterranean Europe, this bird, once little common and known only as migrant, has nowadays become wintering and often resident.

During the winter is now a usual meeting in the plain of North Italy and often is met, though being a usually solitary bird, grouped in good number along ditches and resurgences hunting every small animal, fish or amphibian it encounters.

Presently this heron is slowly conquering the territory once monopolized by the presence of the Grey heron (Ardea cinerea), of the Little egret (Egretta garzetta) and recently, of the Cattle egret (Bubulcus ibis) which is also a new acquisition of the last decade. 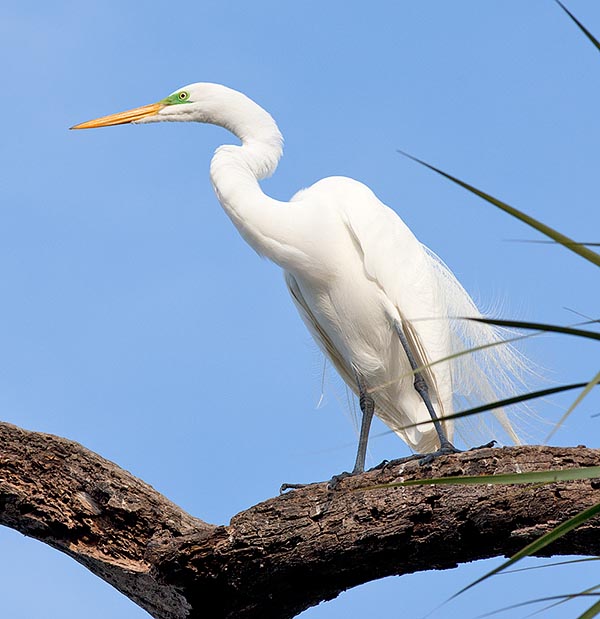 With slow and circumspect walking, with body and neck movements agonizingly slowed down, with careful and attentive look, enhanced by the bifocal sight it has, here it is immersed in water to its knees, hunting its choice preys.

Then, suddenly, seen a frog or a small fish, partially withdrawn between the shoulders the long neck, as it was loading a weapon, here it is faster than an arrow shooted from a bow tended with full strength, launching the deadly and infallible beak on the poor victim.

Often, if the prey is a big fish or an incautious vole, the beak is used like a knife that pierces the victim from side to side, immobilizing it instantly. Also the mindless introduction of alien species, such as the Louisiana crawfish (Procambarus clarkii) that has prevailed on the native species basically infesting all northern Italy water streams, may be singled out as a cause of the increment of this bird and of the increase of the population itself of the grey heron (Ardea cinerea).

The etymology of the scientific name is quite particular.

The genus Ardea is a Latin term indicating the heron. In the Roman mythology designated the present city of Ardea in Latium, at that time capital town of the Rutuli that was completely destroyed and burned out. From its ruins rose a bird who, after having emitted a long wail and having shaken off the ashes covering completely the wings, turned out to be white. Perhaps a direct relationship with the legend of the Phoenix.

The genus Casmerodius comes from the Greek “khasios” = treasure and “erodius” = heron, with reference to the richness given by the feathers of the egrets so much coveted by the Western fashion in the early twentieth century. The species alba comes from the Latin “albus” = white, to indicate the typical coloration of this bird. All common names are referred to its candid colour or to its considerable size. In English Great (White) egret; in French Grande Aigrette; in German Silberreiher; in Spanish Garceta grande and in Portuguese Garça-branca-grande. 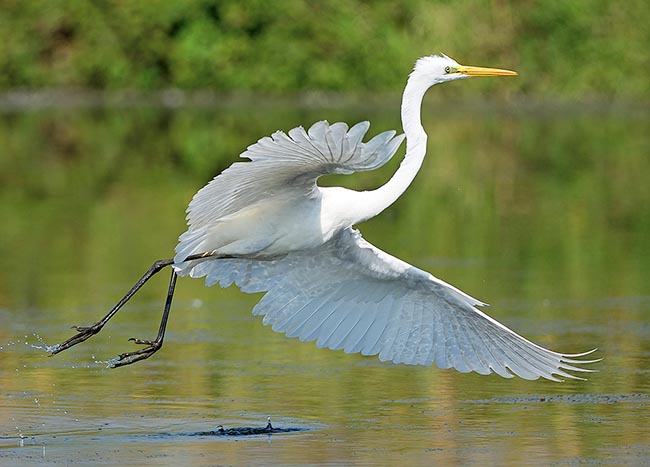 The great white heron has a very vast range covering all the tropical areas of the world, most of the temperate zones and often also northernmost latitudes.

The density of its population is not equally distributed and in some zones their number results being very high whilst in others is fairly scarce.

However, it’s a bird in strong expansion in Europe where results still localized and since some years has begun to colonize territories from which was absent since centuries. The first nidification in England dates from a few years ago.

This expansion has coincided also with the northwards widening of its hibernation areas, once only site of migratory transit of this species.

In North America this flux goes up to Canada fed by the huge colonies present in the southern belt of the USA. The very vast range occupied by this species has determined the classification of four subspecies, practically one per continent, groupings that identify specimens with minor but significant morphological difference between them.

In many parts of its range it’s a sedentary bird whilst in the edge towards the temperate ares, it becomes a transversal or medium range bird. 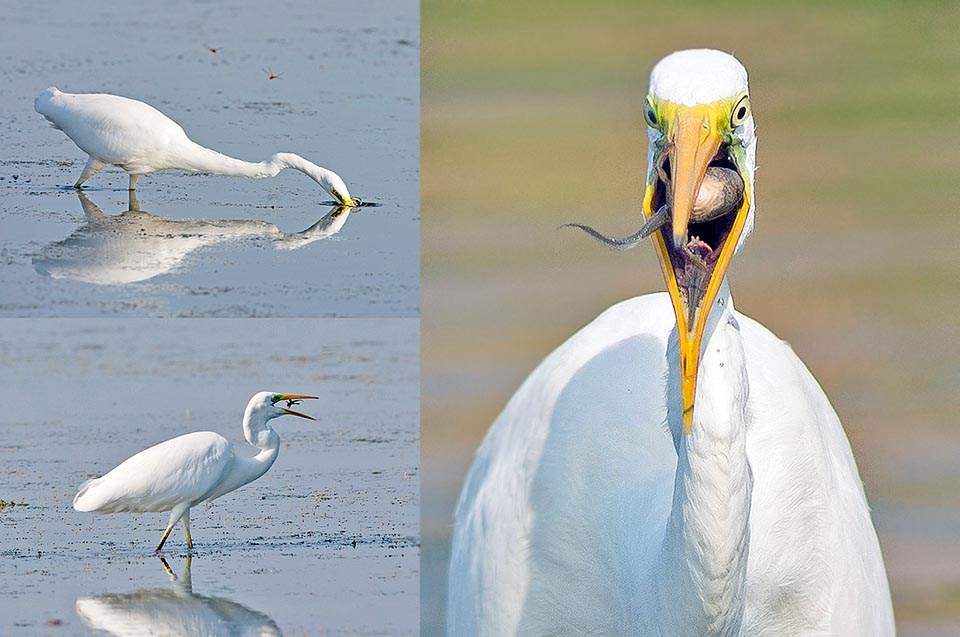 It mainly nourishes of amphibians and fish, here a triton, but if necessary also of small nestlings, rodents, grass snakes and insects © Gianfranco Colombo

The great white heron is the typical inhabitant of the humid ambients, of the wetlands, of the river banks and of the shores of the lakes, but does not disdain anthropized and intensely cultivated ambients, such as rice fields, freshly plowed fields and flooded meadows. It frequents, occasionally, also beaches in particular those subjected to strong tides with muddy bottom and rich of algae. During the winter season in the sites of migratory transit or of hibernation, it does not disdain to visit the stubbles of cereals, grassy fields covered by light brushwood, irrigation ditches or resurgences. It mainly nourishes of amphibians and of fish but becomes omnivorous if necessary, eating small nestlings, rodents, grass snakes and even insects. 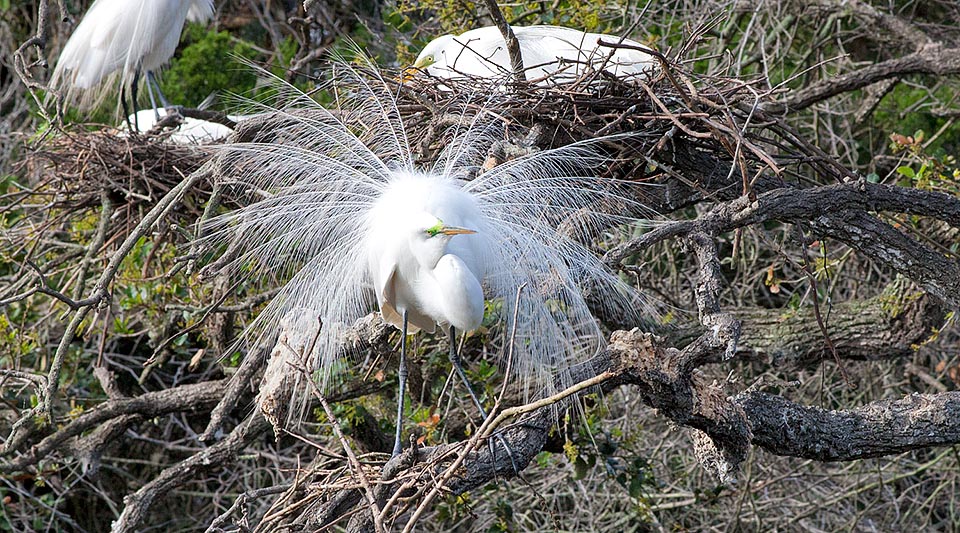 The elegance of the nuptial livery of this bird is extraordinary. In the reproductive time the Ardea alba adorns of fringed feathers on the back that gently prolong on the tail to form an incredible soft fan. They are the famous aigrettes so dear and sought in the early XX century to create pompous frills for hats and scarves © Giuseppe Mazza

The name itself given to this bird, indicates unmistakeably the colour of its livery, in fact it is a totally white bird in the upper part as well as in the lower one. The only variation in the livery, however only seasonal and driven by reproductive ambitions, concerns the growth of fringed feathers on the back prolonging gently on the tail to form a soft fan. The famous “aigrettes” so much expensive and sought for by the beginning of the XX century for the creation of ostentatious tinsels for hats and scarves that led this bird along with the little egret to a high risk of extinction, due to the dogged hunting to which they were submitted.

The elegance of the nuptial livery of this bird is extraordinary, a grace enhanced even more by the soft and sinuous movements kept during the courting that renders it even more vaporous and intangible.

The beak is yellow but becomes paler and blackish during the reproductive season, as well as the very long legs that get a contrary transformation transforming from greyish to slightly yellow. The eyes are of a bright yellow colour. The immatures do not have a particular livery and are similar to the adults in non-nuptial livery. The great white heron is a big ardeid such as to stand among the biggest of its similars. 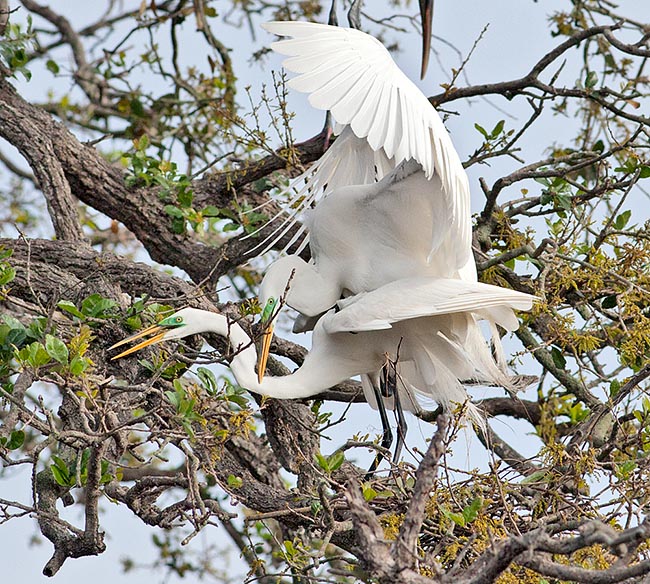 Mating. The nest is a wide platform of dried branches covered inside by twigs and soft material to host 2-5 bluish eggs that while hatching turn ochre. The great white heron is not an endangered species © Giuseppe Mazza

The wingspan is of more than 160 cm, with 100 cm of length and a weight that may reach the 1500 g. Usually, it is a silent bird but emits sudden guttural verses when afraid or mobbed during the flight by other birds or, more often, when gathered in colonies.

The great white heron can nidify either in isolated pairs or in colonies mixed with other ardeids.

It loves the reeds when the same are of good extension or big trees when in heronry. In the tropics it habitually uses the mangroves and the bamboos growths.

The eyrie is a wide platform of dry branches covered inside by small leaves and soft material where it lays 2-5 light bluish eggs, a shade they then lose during the hatching becoming ochraceous. The eggs are quite small if compared to the size of the heron.

Usually it is the female that remains on the nest for a period of about 25 days and then during the first days of life of the chicks in order to contrast possible predations.

Also during the rotation in the hatching or during an accidental absence of both partners, the nest is constantly surveyed by the whole colony that signals and fights actively the attack of the ubiquitous carrion crows. Initially the young are covered by a soft white down till the appearance of the first feathers and are quite greedy, intrusive and cackling. Once the very first weeks have passed, they get away from the nest sheltering on the nearby branches of often in the bushes on the ground around the tree where the eyrie is located or in the close reeds but they will take at least 6 weeks before flying away. The great white heron is not considered as an endangered species.