The species is native to China (Anhui, Fujian, Guangdong, Guangxi, Hainan, Hubei, Hunan, Jiangsu, Jiangxi, Xizang, Yunnan and Zhejiang), India, Japan (Honshu, Kyushu, Ryukyu Islands and Shikoku), Malaysia, Myanmar, Philippines, South Korea, Thailand and Vietnam, where it grows in the forests and along the river banks up to about 2400 m of altitude.

The name of the genus comes from the Greek “àrdis” = arrow point, with reference to the pointed petals; the Latin name of the species, “crenata” = crenate, with rounded and wide fringed edge, refers to the margins of the leaf.

The Ardisia crenata Sims (1817) is a slow-growing, evergreen shrub, up to about 1,8 m tall, with ascending branches covered by tiny reddish glandulae.

The leaves, on a short petiole, are alternate, simple, from oblanceolate to elliptic with pointed apex, glossy dark green up, pale green below, 7-15 cm long and 2-4 cm broad, leathery, with fringed and crenate margin. 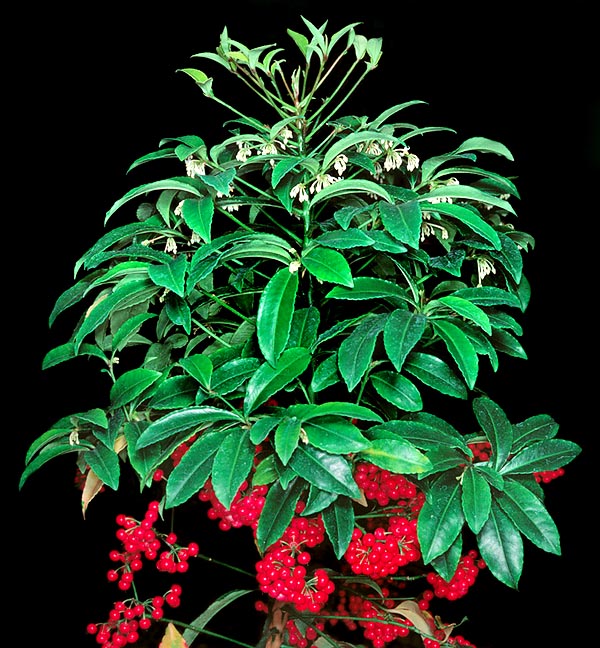 The fruits are globose drupes, red when ripe, of 6-8 mm of diameter, persistent for long, six months and even more, containing one seed only; a variety with white fruits does exist.

It reproduces by cutting in summer, in luminous position, but distant from the direct sun, in a humid substratum formed by soil and coarse sand ore agri-perlite in equal parts; it is wise to enclose the whole with a transparent plastic bag in order to keep a high level of humidity till the radication, which happens in about two months.

It easily reproduces also by seed, provided fresh and not dehydrated, so much to have escaped to the cultivation in some zones, thanks to the dispersion done by the birds, becoming a weed and choking the native vegetation; it flowers on the second, third year from the sowing.

It is a species cultivable in the tropical, subtropical climate zones and also in the warm temperate ones where it can resist to temperatures around the -4 °C, even if with damage to the foliage, lower temperatures destroy the aerial part, but with a good mulching it seems to be able to resist, at root level, up to about -11 °C, vegetating again in spring.
Of great ornamental effect due to the glossy foliage and the crowd of glossy and red fruits in hanging clusters, it requires filtered sun or partial shade and soils rich of organic substance, deep, well drained and kept humid, ideal in groups or in mass as soil cover in shady zones.

Cultivated in pot as indoor plant, it is usually offered during the winter time, in particular during the Christmas holidays, when the fruits have already reached their intense red colouration.

When in apartment, it requires a luminous position, but far away from the direct sun and a substratum rich of organic substance with addition of coarse sand or agri-perlite around d the 30%; waterings must be regular in summer, avoiding in any case the water stagnations, and suitably spaced in winter, in such a way to keep a light and constant humidity in the substratum.

In winter we shall have to avoid the proximity of heat sources as well as too low temperatures, less than 8-10 °C, which might cause the loss of the leaves, frequent nebulisations with water without limescale and at ambient temperature are useful.

The prunings, in order to keep a compact form, are to be done in spring, whilst the repotting, when necessary, in winter. Being subject to aphids and scale insects attacks is to be frequently checked in order to quickly take action.

Leaves, fruits and roots are utilized in the traditional medicine for various pathologies.