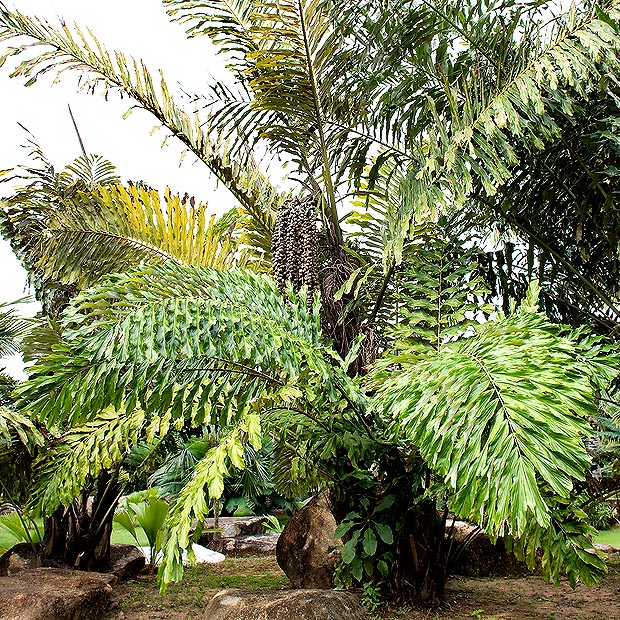 3-5 m stems and 3 m leaves. The Arenga undulatifolia is a much decorative palm for the Tropics © G. Mazza

This plant is native to Borneo, Philippines (Palawan Island) and Indonesia (Sulawesi Island), where it grows in the pluvial forests at low and medium altitudes, mostly on the banks of the water courses.

The name of the genus, Arenga, comes from the Malaysian ‘areng’, referred to the Arenga pinnata.

The name of the species is the combination of the Latin words “undulates, a, um = undulated, and “folium” = leaf, with reference to the pinnulae of the leaves, as they have wavy margins.

The Arenga undulatifolia Becc. (1886) is a monoecious plant, monocarpic (bearing fruit only one time during its existence), caespitose, but at times solitary, with 3-5 m tall stems, even if when in cultivation they often keep lower.

The stems are covered by the foliar bases and by a mass of blackish-brown fibres which remain for long time as only in the oldest specimens the lower part of the stem does not have them and is of dark green colour and with the well visible rings, trace of leaves junctions.
The leaves, on a short petiole, are pinnate, initially erect, and then elegantly curved, up to about 3 m long, with linear pinnulae distributed uniformly on the rachis, about 60 cm long, with indented, lobed and undulated margins, of dark green colour with bluish reflexes on the upper part and pale grey under. 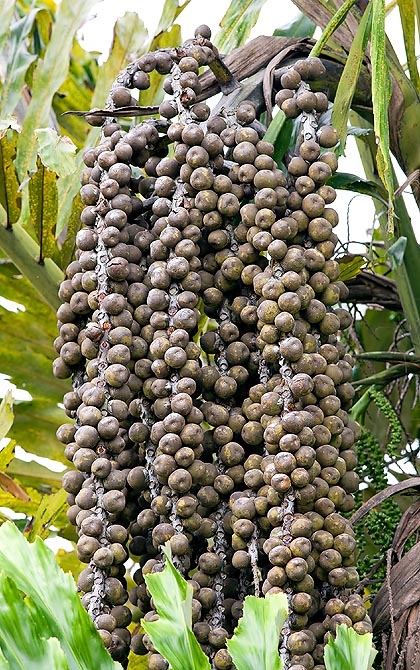 The fruits contain 3 seeds and a caustic pulp © Giuseppe Mazza

The inflorescences develop between the leaves, are ramified, initially erect than hanging, carrying only male or female flowers, but always on the same plant. In particular, the male flowers are noticeable for their colour, going from the yellow to orange to brown, and for the intense spicy scent they emanate.

The fruits are globose, of 3-4 cm of diameter, brown when ripe and usually contain three seeds. The pulp contains irritant substances and therefore it is to be handled with care, wearing gloves, if possible. The fresh seeds germinate in 4-10 weeks at the temperature of 24-28 °C; the growth is fairly fast when in the best conditions of cultivation.

The Arenga undulatifolia is by sure one of the most ornamental palms thanks to its great undulated leaves and the contrast of colour between the whitish lower page and the upper one, dark green with metallic bluish reflexes which the least breeze renders even more evident.

It is a plant in need of ample spaces for showing its characteristics in the best way, and perhaps it is also for this reason that it is somewhat little diffused out from the places of origin, cultivable in the humid tropical and subtropical climate, with lowest temperatures usually over the 16-18 °C, even if it may stand isolated decreases of temperatures down to 0 °C for a very short time, but with detriment of the foliage. It is to be placed in full sun, or under slight shade, on well drained soils, rich of organic substance, slightly acidic or neutral and kept constantly humid.

The pith of the plant has been in the past an important source of carbohydrates (sago) for some native populations, in particular when other sources were scarce; nowadays, when cooked with beef, is considered as a dainty and worthy to figure in the meals of the most important festivities and ceremonies.

Unusual by sure was the utilization of the roots of this palm made by the natives of Palawan Island (Philippines) in making strings for their most common musical instrument.