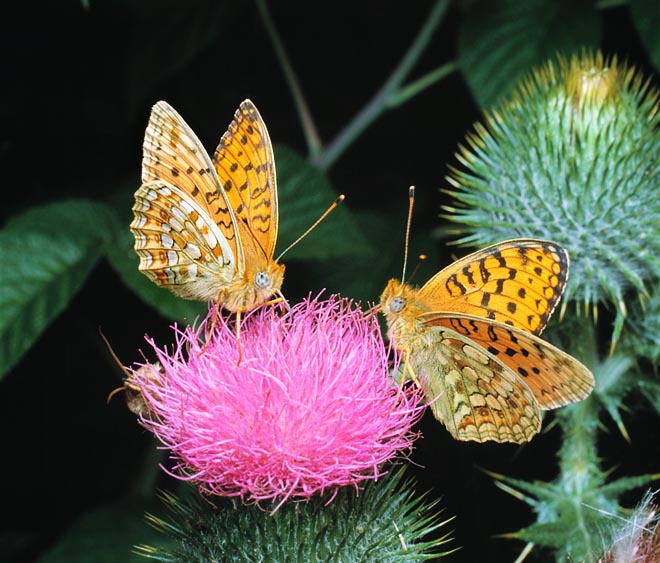 Argynnis niobe is a good-sized butterfly, reaching 6 cm of wingspan. To be absolutely certain on the right identification we must look with a lot of attention at the lower page of the rear wing © Giuseppe Mazza

The Niobe fritillary (Argynnis niobe Linnaeus, 1758) belongs to the order of the Lepidoptera and to the family of the Nymphalidae. This family is considered to be the most consistent among those grouping the diurnal lepidopterans and includes more than 6.000 species of butterflies scattered all over the world.

The Niobe fritillary is one of the three butterflies deemed to stand among the most difficult to identify on the field if observing only the upper face of the wings.

In fact, with the Argynnis adippe and Mesoacidalia aglaja it shares a very strong resemblance, so much to render almost impossible an immediate distinction among the species.

Actually, as written below in the morphological characteristics, only from the lecture of the lower page of the rear wing we can have an absolute certainty on the correct identification.

Though many authors consider Fabriciana as the genus to which assign it, others place it among the Argynnis.

The term “niobe”, as is the case in most of the scientific names, has been adopted from the Greek mythology. Niobe was the daughter of Tantalus and wife of Amphion, son of Zeus and of Antiope who, as having had more sons than Leto (Latona, the mother of Apollon), suffered the punishment of seeing all her sons killed and she herself transformed into a rock that exudes tears continuously. From Hamlet by Shakespeare – I,ii, 149 “like Niobe, all tears”.

For the etymology of the genus Argynnis please see the l’ Argynnis paphia. The term Fabriciana was given by Linnaeus in honour of Fabricius, the Danish entomologist who was his favourite pupil.

The vulgar European names are: in English, Niobe Fritillary; in German, Mittlere Perlmutterfalter; in French, Chiffre; in Catalan, el Niobe. 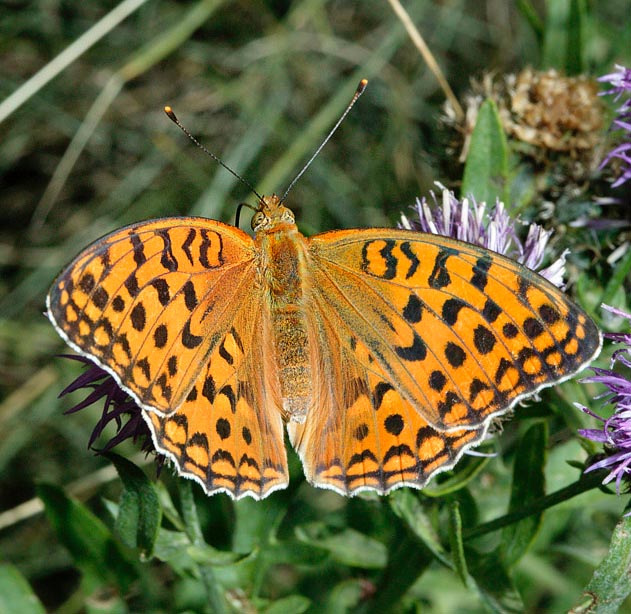 Its flight is rapid and nervous with sudden jerks, but is easy to approach when still while feeding © G. Mazza

The Niobe fritillary is an amply diffused butterfly in Europe, but is absent in the northernmost regions, is missing in England and almost totally in the Scandinavian Peninsula. It is not present in Africa and in Sardinia. Absent on almost all the territory of Norway, Sweden and Finland, is on the contrary present in the continental area touching the Baltic Sea and arrives northward up to the coasts of the White Sea and the Arctic Sea. Moreover, it occupies the temperate area which through Middle-Eastern Asia, Iran, and China goes up to Korea. It is also found in the Asian Russia and in the southern part of Siberia.

Argynnis niobe lives in clearings of woods, in alpine meadows and grassy valleys, preferably choosing flowered meadows dotted with rocky outcrops. In the areas where it lives it is never present in great number but is anyway amply diffused. It is found from the sea level up to 2400 m of altitude.

The Niobe fritillary is a butterfly of considerable size as it reaches the 60 mm of wingspan. Like all Argynnis the female is bigger and shows more marked alar drawings. It has a fast and nervous flight with sudden jerks and rapid movements but is easily approachable when still while feeding. The upper face of the wings is bright orange, with drawings, spots and black lines of various size. As said before, it cannot be distinguished on the field from the two congeners high brown fritillary and dark green fritillary, if not through the lecture of the back of the rear wings.

From the high brown fritillary it distinguishes for the suffused green shade frequently present on the upper face of the wings in the basal area. On the back of the rear wing, for the smaller silvery spots and for the series of small spots edged of red in the post-discal area that in the Argynnis adippe are more evident and edged of black. From the dark green fritillary it distinguishes as totally missing of these small spots.

Furthermore, the Niobe fritillary has a very particular characteristic not indicated in the other similars: in the cell has a small but distinct black spot slightly contoured of yellow. Robust brown antennae with flat and rounded yellowish vertices. 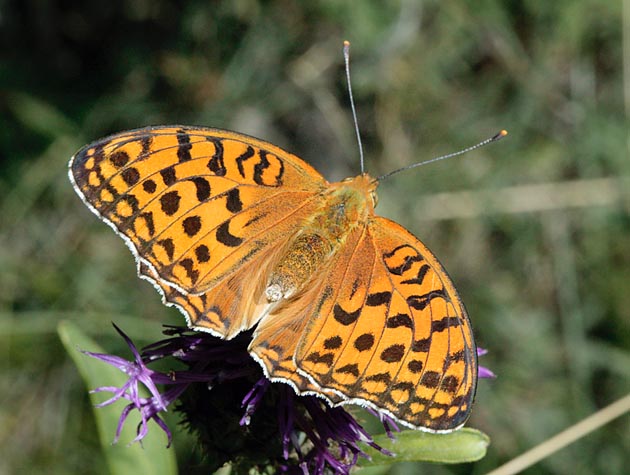 It has only one annual generation and flies in the warmest summer period from June to all August © G. Mazza

There are two different forms of the Niobe fritillary: the typical, characterized by the presence of whitish/silvery spots on the back of the rear wings, species diffused in the southern part of the French territory and the eris, the predominant form present everywhere, having yellowish spots.

The Niobe fritillary has only one annual generation and flies during the warmest period of the summer, from June to the entire August.

Males often can be seen motionless in areas without vegetation waiting for the passing by females which immediately they chase, treatment however reserved to every butterfly flying over their territory.

It adores sucking the nectar of the asters whereby it is seen often flying in the meadows where these essences are present in good number but does not disdain other flowers preferring in absolute those growing in the hill and mountain meadows.

The host plants are mainly the violets, in particular Viola canina, Viola riviniana and Viola tricolor, but at times also the Plantago lanceolata. The eggs are laid on stems of withered grass or on leaves decaying on the soil, in the proximities of the host plant, where they will spend the winter in this stage.

The larva, even if already formed inside the egg since the late summer, keeps dormant till the following spring, when it will emerge for feeding and reaching the full development. The caterpillar id brownish covered by numerous and tiny spiny protuberances. It is slow growing as it needs even if two months for reaching the stage of chrysalis. The hatching happens after about two weeks or even more, depending on the climatic conditions.