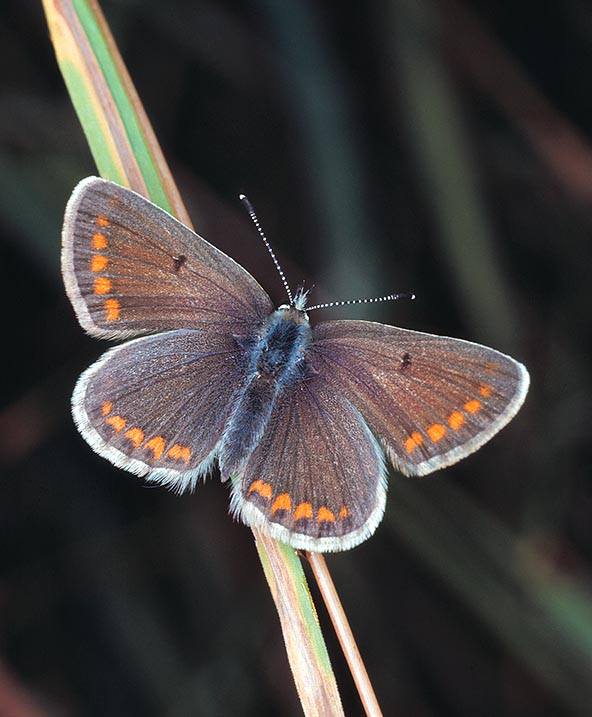 Less showy than other Lycaenidae, Aricia agestis has a wingspan of only 28 mm © Giuseppe Mazza

The Brown argus (Aricia agestis – Denis & Schiffermuller, 1775), belongs to the order of the Lepidoptera and to the family of the Lycaenidae, a group of butterflies present in all continents, medium sized and with extremely lively and brilliant colours.

With about 90 species present in Europe and in the Mediterranean area, this family results being the most numerous among all our lepidopterans. Usually the European members of this family, especially the males, do have very attractive colours going from the auburn orange to the emerald green, from the iridescent violet to the bright blue and only in some ten species, a more ordinary brown colour. The Aricia agestis belongs to this last group and in fact both sexes exhibit this colour on the upper face of the wings.

It is a rather small and very fast in flight butterfly, but is well visible and present in our flowery meadows; a plain species, even if it can be observed up to 900 m, but over this altitude and in the northern limit of its range, is replaced and overlaps to the Aricia artaxerses, species considered as a ssp. until a few decades ago, from it differs only for a small white mark on the upper face of the fore wing which is black in the brown argus.

The etymology of the genus Aricia comes from the name of Ariccia, city of Latium, where was located a temple dedicated to Diana. “Agestis” has an unclear derivation and has no meaning. Many talk of a typographic error for “agestis” = rustic, rural, from the substantive “ager” = meadow, alluding in Latin to the habitat preferred by this butterfly.

If we consider that almost all the names borrowed by Denis & Schiffermuller, are related to the classical mythology, this case appears to be an exception. Perhaps we might also think of a bad interpretation of Argestes, the god of the north-western wind. The common European names are: Brown argus, in English; Kleine Sonnenröschen, in German; Bläulingbruinblaustje, in Dutch; Collier de corail or Argus brun or Azuré brun, in French.

The brown argus is well present on the European continent but a wide part of the Scandinavian peninsula, Ireland and, partly, in Scotland. In the Asian continent, it is found along a temperate belt which, starting from Anatolia, grazes the whole Himalayan range and the Chinese Tien shan getting up to Siberia. 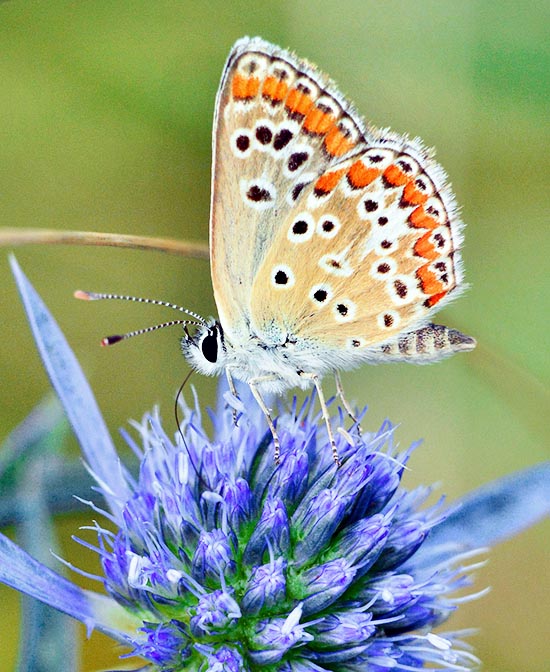 It is widely diffused in Europe. It frequents areas with good sun and it is easy to sight it during the warm hours of the day when it flies fast with rapid darts from flower to flower. It prefers open and grassy plains but also open woods.

It much loves to suck the nectar of the marjoram and of the thyme, where often spends very long periods devoted exclusively to this activity. In fact, it is a species much attached to the frequented location and often its movements reduce to a few metres during the whole day.

It is a very social species, like many Lycaenids and often gathers on withered stalks to spend the night in dense groups. Often the same area is shared with Polyammatus icarus.

The brown argus is a small butterfly not showing the typical characteristics of the Lycaenids.
As previously mentioned, it does not have lively colours on the upper faces of the wings but though the dominant colour is dark brown, there is a series of orange lunulae that from the apex of the fore wing gets to cover the whole rear wing occupying both sub-marginal areas. Furthermore, in the centre of the discal area of the fore wing, is present a small black elongated spot which distinguishes it from the Aricia artaxerses.

The brightness of these lunulae exalts strongly on the little attractive base colour granting it that particular touch which renders it, along with its rapidity, a fairly agreeable butterfly. There is no sexual dimorphism between the sexes apart an almost unremarkable bigger size of the female. Already the face of the upper wings would be sufficient for determining the species, especially considering the fact that the drawings shown on the verso of the wings might be easily mistaken with some other Lycaenids living in the same areas. However, on the verso of the wings are proposed again the same orange lunulae present on the upper face, rendering it unique in its genus. The rest of the wing is marked by various black small points surrounded by a white halo. At the centre of the rear wing n the post-discal area is present a white spot, well visible especially in the female.

The brown argus is a somewhat prolific butterfly and may give birth, in the warmest areas to three annual generations. It is also precocious as the first generation flies off from April continuing then until late autumn. 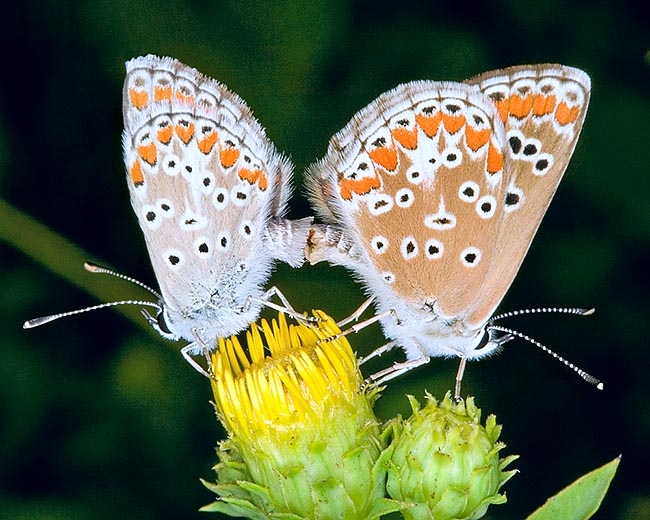 A mating. The larvae can live in symbosis with ants of the genera Lasius and Myrmica © Giuseppe Mazza

The eggs are laid singly on the lower page of the leaves of the host plants and have an incubation of a few days. The caterpillar is rather stocky and short, of greenish colour with some violet marks and oblique lines of a more intense green colour. It is very mimetic and keeps usually hidden on the verso of the leaf nourishing of the surface layer without emerging at all on the upper face of the same, leaving little evidence of its presence. It spends the winter at the larval state when the caterpillar is in the first stages of growth.

The host plants belong to species of the genera Helianthemum, Erodium and Geranium.

As is the case for many Lycaenids, when the growth is completed, the larva is often taken into custody by the ants of the genera Lasius and Myrmica which take it into their nests where is hosted till the day of the fly off. As known, the larva once ripe, secretes from the skin an exudate much appreciated by the ants who take advantage of it carrying it safe into their nest where it is duly looked after and cared.

This symbiosis grants the butterfly a strong protection against the terrestrial and flying predators and grants the ants for some time a remarkable and rich source of food. When is not intercepted by the ants, the caterpillar forms a chrysalis on the ground at the foot of the host plants and will stay in this stage for a period of about 10 days.

The continuous reclassifications and upgrades in the scientific binomen of this butterfly have often led to new classifications of species before considered ssp. and vice versa. As a consequence, also the synonyms are subject to the same treatment.
Here are some of them: Polyommatus agestis – Denis & Schiffermuller, 1775; Aricia asiatica – Obraztsov, 1900; Aricia anatolica – Watson, 1910; Eumedonia afghana – Brulle, 1950.