The species is native to Argentina (Corrientes, Entre Ríos, Jujuy, Misiones and Santa Fe), Bolivia, Brazil (Ceará, Mato Grosso, Mato Grosso do Sul, Minas Gerais, Paraná, Rio de Janeiro, Rondonia, Santa Catarina and São Paulo), Colombia, Ecuador, Paraguay and Peru where it lives at the margins of the forests and along the banks of the water streams.

The name of the genus comes from the combination of the Greek terms “ἄριστος” (aristos) = the best, excellent, and “λοχεια” (locheia) = childbirth, with reference to the belief that the plant did favour the delivery; the name of the species is the Latin adjective “littoralis” = littoral, coastal.

The Aristolochia littoralis Parodi (1878) is an evergreen, perennial climber, with voluble stems lignifying at the base, up to 8 m long in presence of supports. The leaves, on a 2-5,5 cm long petiole, are alternate, simple, cordate-triangular of pale green colour on the upper page, green grey below, 4-8 cm long and 5-10 cm broad.

The flowers, at the axil of the leaves on drooping, up to about 10 cm long, peduncle are solitary, formed only by three sepals merged in a long curved tube swollen at the base ending in a roundish expanded lobe, about 9 cm long and 5 cm broad, bilobed at the base, of purple brown colour with cream white veins; the cream yellow fauces is surrounded on top by a velvety dark brown spot and is covered by white hairs which favour the entrance of the pollinating insect, but prevent its exit till when the fecundation has taken place.

The flowers are odourless, contrary to many species of the genus which give off a smell of rotting flesh. The fruits are oblong capsules with 6 ribs, 4-5 cm long and of 2 cm of diameter, dehiscent at the base, remaining long time on the plant after the opening like a suspended basket, containing numerous 0,6 x 0,4 cm flat winged seeds, of brown colour, dispersed by the wind. It easily self disseminates, so much to having become a pest in some tropical and subtropical areas where it has escaped the cultivation. 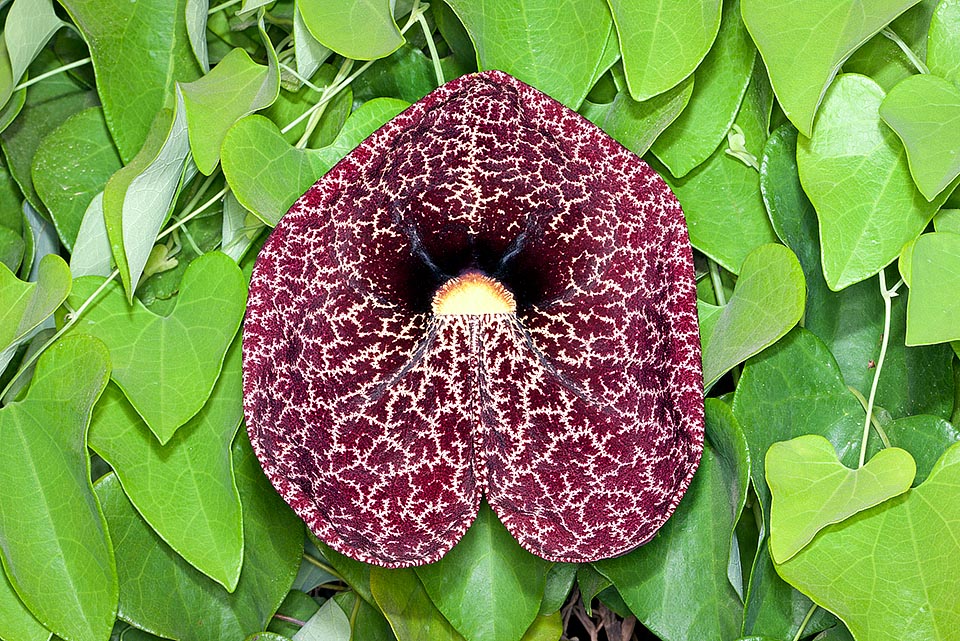 8 m climber, unscrupulous, Aristolochia littoralis imprisons the pollinators with its 90 cm trap flower and poisons with the leaves the tropical butterflies caterpillars that mistake it, where naturalized, for another species. All parts of the plant are used by local populations of Central-South America for various pathologies © Giuseppe Mazza

It reproduces by seed, previously immersed in water for 2 days, placed in surface on organic loam with addition of coarse siliceous sand per a 30%, maintained humid at the temperature of 20-22 °C, with variable germination times, 1-3 months, and by semi-woody cutting. Vigorous and fast-growing species with dense ornamental foliage and attractive flowers produced for long time, cultivable in the tropical, subtropical and warm temperate climate zones, where it resists practically unscathed up to about -2 °C, loosing the aerial part, but resisting at root level up to about -8 °C.

It requires full sun or slight shade and is not particular about the soil, even if it grows better in those rich of organic substance and well draining, maintained almost constantly humid. Cultivable also in pot, with proper supports where to climb, for the decoration of greenhouses, verandas and luminous winter gardens with regular watering in summer, more spaced in winter, letting the substratum to partially dry up before giving water again, and fertilizations from spring to autumn preferably with balanced products with microelements.

All the parts of the plant are utilized in the traditional medicine of the origin countries for various pathologies.

In the regions of South-East Asia and of Australia, where it has naturalized, it menaces the survival of some butterflies belonging to the genera Ornithoptera, Trogonoptera and Troides which lay their eggs on the leaves of native Aristolochiaceae and also on this alien species which they are unable to distinguish, but whose leaves are poisonous for the larvae. For instance, the population of the Australian butterfly Ornithoptera richmondia (Gray, 1853) has decreased significantly due to the reduction of its habitat as well as due to the diffused presence of the Aristolochia littoralis, escaped from the cultivation, which the butterfly does not recognize from the two endemic host species, Pararistolochia praevenosa (F. Muell.) Mich.J.Parsons (1996) and Pararistolochia laheyana (F.M.Bailey) Mich.J.Parsons (1996).