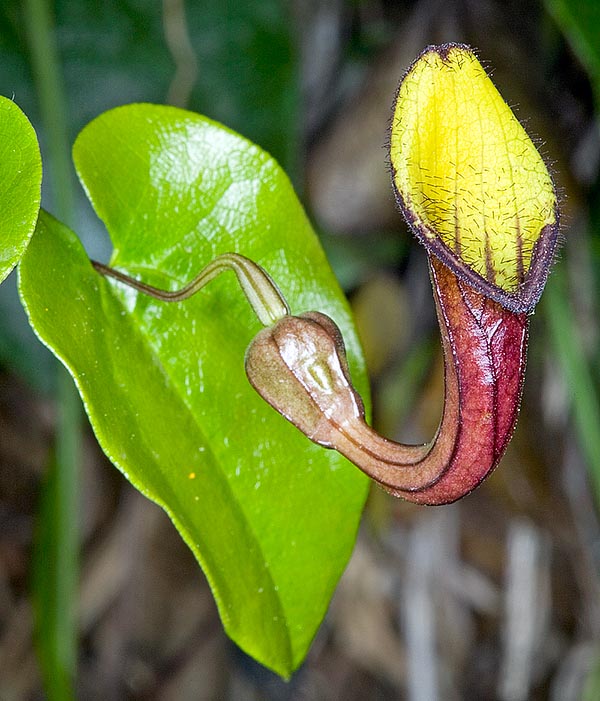 The Aristolochia sempervirens L. (1753) is native to northern Africa (Algeria), western Asia (Cyprus, Israel, Lebanon, Syria and Turkey), and south-eastern Europe (Greece and Italy), where it grows in woods, thickets and rocky areas.

The name of the genus comes from the combination of the Greek words “aristos” = the best, very good, and “locheia” = delivery, with reference to the belief that the plant would help the childbirth; the name of the species is the Latin word “sempervirens” = evergreen, with obvious signification.

Evergreen, creeping or climbing plant, with semi-woody stems, long up to about 6 m and cordate-oblong leaves with entire, undulated or serrate margin, and sharp apex, 3-8 cm long and 3-5 cm broad, of an intense glossy green colour.

The flowers, on hanging peduncles, are axillar, solitary, without petals, with a calyx formed by a U-bent tube, 3-5 cm long, purple coloured, with dark purple oval edge. The fauces, yellow, striated of dark purple, is covered by hair which favour the entrance of the pollinating insect, but hinder its exit till when the fecundation has happened.

The fruits are blackish oblong capsules, about 8 cm long and 2 cm broad, dehiscent (fruits which open spontaneously when ripe along the lines of minor resistance, freeing the seeds), containing several flat, thin, chartaceous seeds, about 7 mm long and 5 mm broad.

It easily propagates by seed and by cutting. 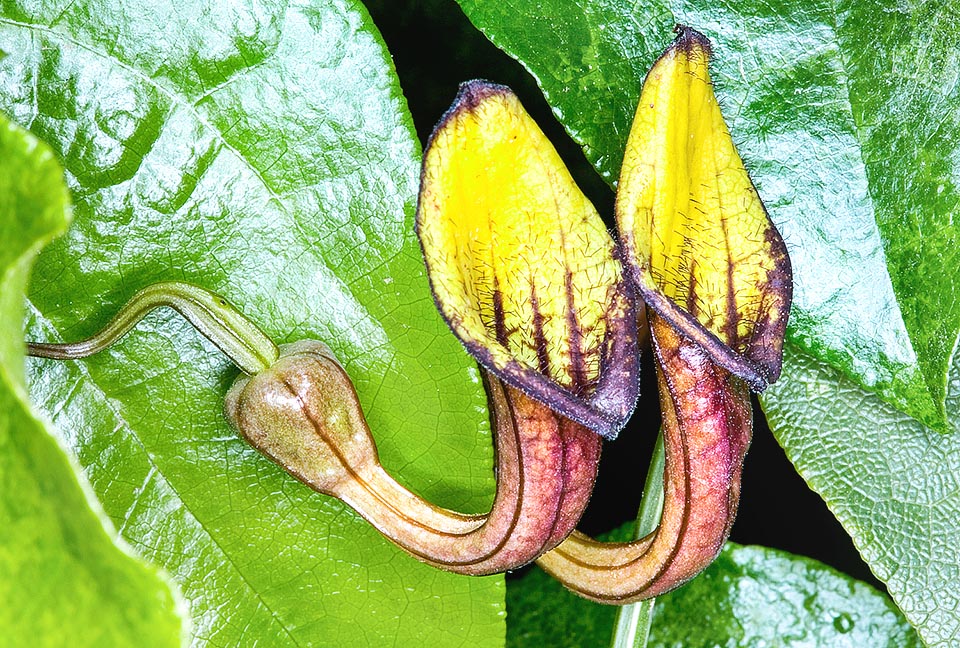 Creeping or climbing evergreen with even 6 m long stems, Aristolochia sempervirens has small flowers formed by a U-bent tube, 3-5 cm long, with several curved hairs favouring the entrance of pronubial insects but then blocking their exit. They will imprison them as usual in Aristolochia till fertilization occurrence © Giuseppe Mazza

Cultivated mainly in botanical collections and as a curiosity, it requires an exposition in full sun or partial shade, in rocky and draining soils; it can resist to temperatures of -9 °C and thanks to its rusticity and facility of propagation by seed, it has naturalized in other countries of southern Europe, having slipped out from Botanical Gardens and private ones.

In medicine, the leaves decoction is utilized as antidote against the snakes bite, whilst the leaves, broken into small pieces, were utilized directly on the wound.