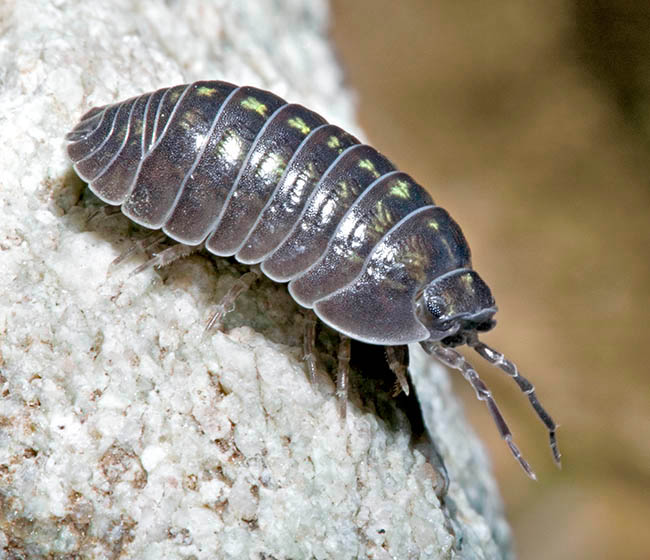 The Pill-bug, called also Pill woodlouse, Roly-poly, Potato bug, Doodle bug (Armadillidium vulgare) is a crustacean very diffused in Europe. It’s an isopod (Isopoda) belonging to the superorder Peracarida from which have departed the brave crustaceans that, abandoned the aquatic environment, have colonized the mainland. It measures at most 18 mm and unlikely other congeners it can perfectly close like a small ball when resting or if disturbed. It loves humid environments, even if it bears drought better than its congeners. Spends most of the day under stones or decaying trunks and during the night it goes out looking for dead vegetables, lichens and encrusting algae, but also vegetable sprouts. When growing it eats the old skin and in winter, when the temperature drops below zero, it hibernates. In some populations the females are by sure more numerous and this has led to studies about the determination of the sex that should depend, besides the chromosomes, from parasitic bacteria © Giuseppe Mazza

→ To appreciate the biodiversity within the CRUSTACEANS please click here.