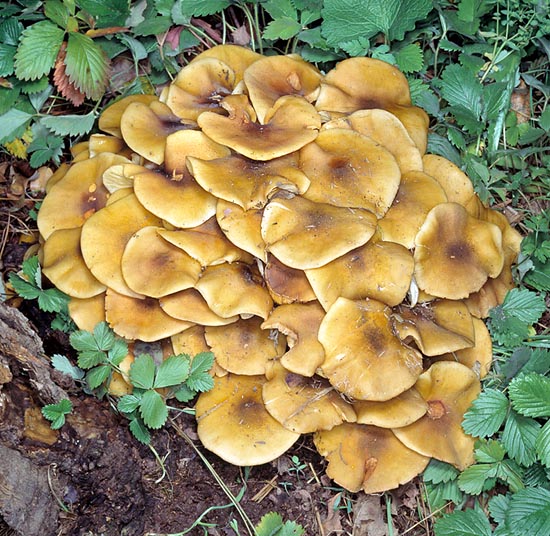 The name of the species comes from the Latin “mel, méllis” = honey, related to honey, honey-coloured.

To this genus belong fleshy carpophores, with homogeneous structure, normally with fasciculated growth.

Normally, the cap is convex with blunt umbo, with the dry surface decorated, usually at its centre, by small scales.

The gills are from adnate to subdecurrent, initially white then cream, dark spotted with the age. The stem is from cylindroid to bulbous, fibrous, with or without ring (remnant of the partial veil).

They are parasite fungi which cause root rots on deciduous trees as well as on conifers. They live also as saprotrophes on the dead logs. 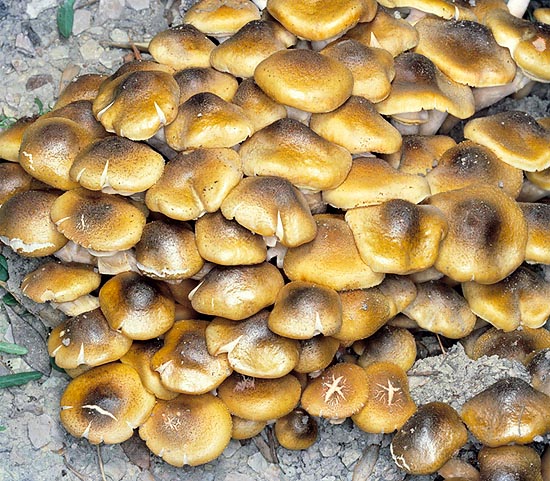 The edible cap is hemispheric first, then flat © Giuseppe Mazza

Cap: 3-10 cm, from hemispheric to convex, then flat with a slight depression, with obtuse umbo, scattered of small brown scales which soon disappear, thicket towards the centre; inrolled margin when young then almost straight, sinuous in the adult fungus, more or less striate, pale or whitish for long time; honey-yellow, yellowish-brown, reddish-brown colour.

Hymenium: not too thick gills, adnate or decurrent for a notch, initially white then brownish, finally spotting of rust.

Stem: 5-12 x 1-2 cm, cylindroid, at times enlarged or more slender at the base, sinuous, fibrous, almost woody, full then filled and finally hollow; from whitish up to concolorous to the cap, brownish at the base, decorated by more or less evanescent flocci, pruinose over the ring.

Ring: membranous, persistent, white, striate in the upper face, floccose in the inferior one and ornate of yellow.

Habitat: parasitic fungus of the living plants, saprophytic of the dead ones; it grows in autumn grows on stumps of various broadleaf, caespitose.

Edibility: edible after cooking, only the cap is suggested to be eaten. 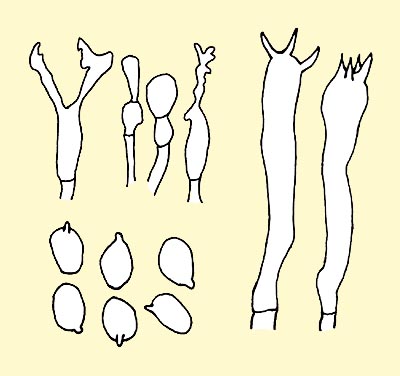 Remarks: this fungus is much known and consumed, even much sought for in some zones.

It may be mistaken with the Armillaria tabescens (Scopoli : Fries) Emel which is, however, missing of the ring, has paler colours and is smaller; the Armillaria ostoyae (Romagnesi) Herink, which is darker, has dark brown, shaggy, scales and the ring with brown border and, furthermore, growing only on conifer; the Armillaria cepistipes Velenovský, which has hygrophanous cap, with darker colours, striate margin, and is smaller and frailer, ocherous stem, more or less bulbous, with the little consistent ring ornatd by yellowish flakes; the Armillaria borealis Marxmüller & Korhonen, which has the cap more or less uniformly coloured of yellowish-brown, ochre, frail, little persistent, ring, smaller species and growing on conifer; the Armillaria gallica Marxmüller & Romagnesi, which has brownish or ocherous cap with yellow-brown scales, slightly striate and a little floccose margin, bulbous or clavate base of the stem.