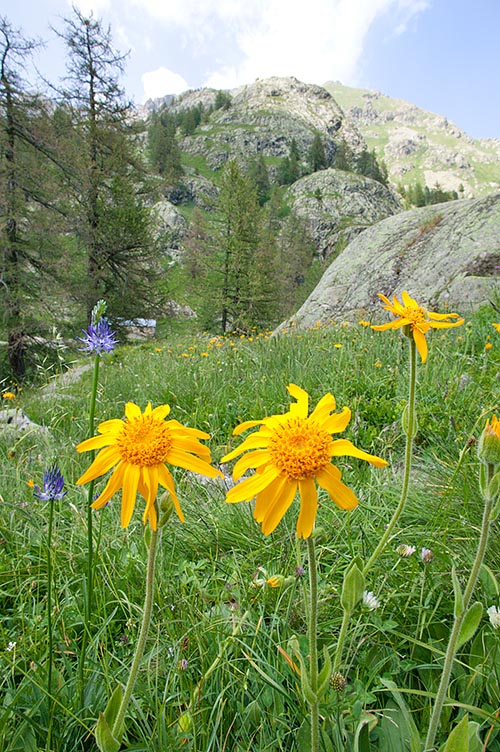 The name of the genus “arnica” is thought to be a corruption of “ptàrmica”, derived from the Greek “ptarmikos”, meaning to sneeze, as the pulverized dried plant causes the sneezing and was employed for such reason by the countrymen of the mountainous regions of North Europe and of France (here it was yore known as “tabac des Vosges” and smoked like the tobacco). After others, the name is associated to the Greek words “arna”, lamb and “arnakis”, lambskin, due to the morbid hairy leaves crossed by delicate nervations, rendering them similar to it.

The name of the species, from the Latin “montanus” = mountainous, of the mountain, reminds us that it is an orophyte.

The Arnica montana L. (1753) is a perennial herbaceous plant with oblique rhizome, truncated, brown-reddish, with unpleasant smell; erect stem (10) 20-50 (60) cm, rigid, simple or not, one-two pairs of opposite branches, villous-glandular due to simple, elongated, patent hairs and short glandular hairs.

Sessile or briefly petiolate leaves, 3-5 (7) -nerved, pubescent up and almost glabrous below, entire or denticulate, the radical ones arranged in cross, in rosette, spatulate (2-4 x 10-15 cm); opposite cauline leaves, smaller, lanceolate or bractiform.

Big floral capitulum (diam. 6-8 cm), unique, or one per each branch, with villous-glandulous involucre, diam. 1-1,5 x 1,5-2 cm with a series of linear-lanceolate scales and minor external squamules. Dark yellow or yellow-orange flowers, the outer ones with 0,5 x 4 cm, tridentate, ligula; the inner ones are tubulous.

It blooms from June to August. Brown-blackish (6 mm) cylindrical achenes, wrinkly, pubescent, equipped with pappus of uniseriate bristles, grey-yellowish (6 mm). It grows in the pastures, in the arid meadows, rhododendrons moors, on acidic soil from 500 to 200 (2650) m of altitude (in some locations it is reported also in plain). 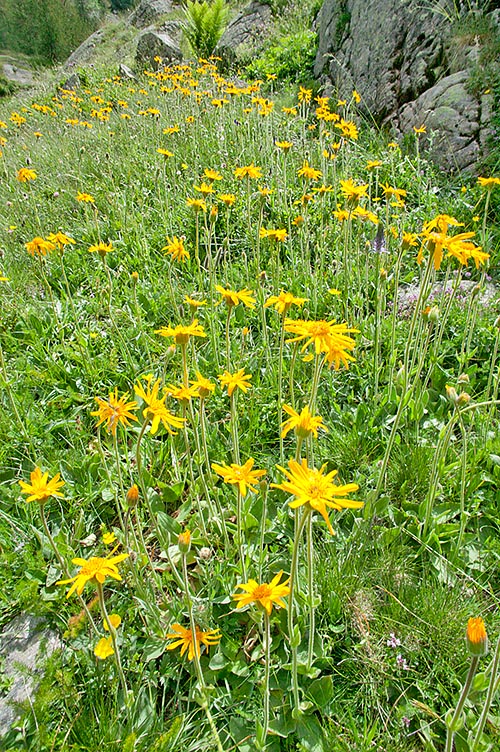 It blooms June to August in meadows, arid fields and moors © Giuseppe Mazza

Its distribution is Central-European orophyte (Alps, Jura, Carpathians and some more southerly mountain ranges). In south-western France and in southern Portugal is reported the subsp. atlantica A.Bolòs (1948). In the Arctic North Europe, besides the nominal species, is diffused also the species angustifolia, calcicola.

The arnica is a protected species in many nations and therefore for the supplying is amply cultivated worldwide; its multiplication takes place by seed or by division of the tufts; it is one of the extremely few officinal Asteraceae having opposite leaves instead of alternate.

The dried capitula (Flos arnicae) have a characteristic aromatic smell, spicy, and bitter and sour taste. The rhizome, well cleaned from the land and from the roots and washed, and the flowers are to be spread to dry in the shade in aerated locations, after that are to be conserved in tin pots, glass or ceramic in dry places sheltered from the light. Before harvesting the flowers it is good to check that they are not infested by the black larvae of the “arnica fly” (Trypeta arnicivora), a parasite that renders the product unusable.

The arnica has anti-asthmatic, antineuralgic, antispasmodic, astringent, broncho-sedative, excitant of the nervous system and cardiovascular-neurotonic. The family use is only the external one, due to the toxicity in case of wrong dosage; the internal use, reserved to physicians. Presently the preparations based on arnica are mainly employed externally as anti-ecchymotic, revulsive and astringent. It is under study also for the positive action on the coronary artery diseases, antibacterial, fungicidal and antitumoural. 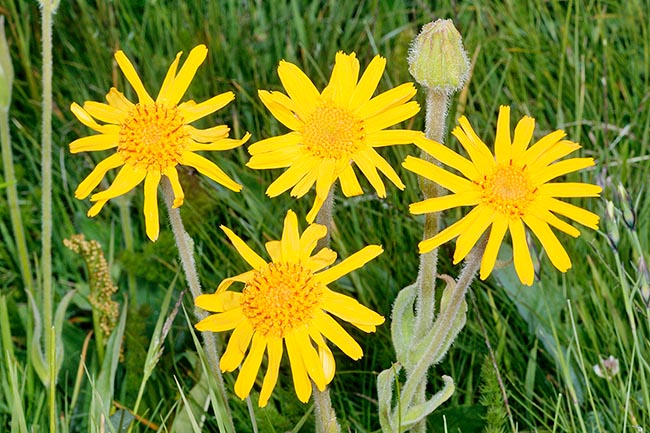 One part of exsiccated capitula with five parts of olive oil. To be employed, only for a few days and on not injured skin, to resolve bruises, sprains, muscular and joint pains, furunculosis, subcutaneous edemata, phlebitis and thrombophlebitis, phlogosis of the oral mucosae, etc., starting with small dosages because, especially on the delicate skin of women and children and in some sensitive subjects it may cause dermatitis.