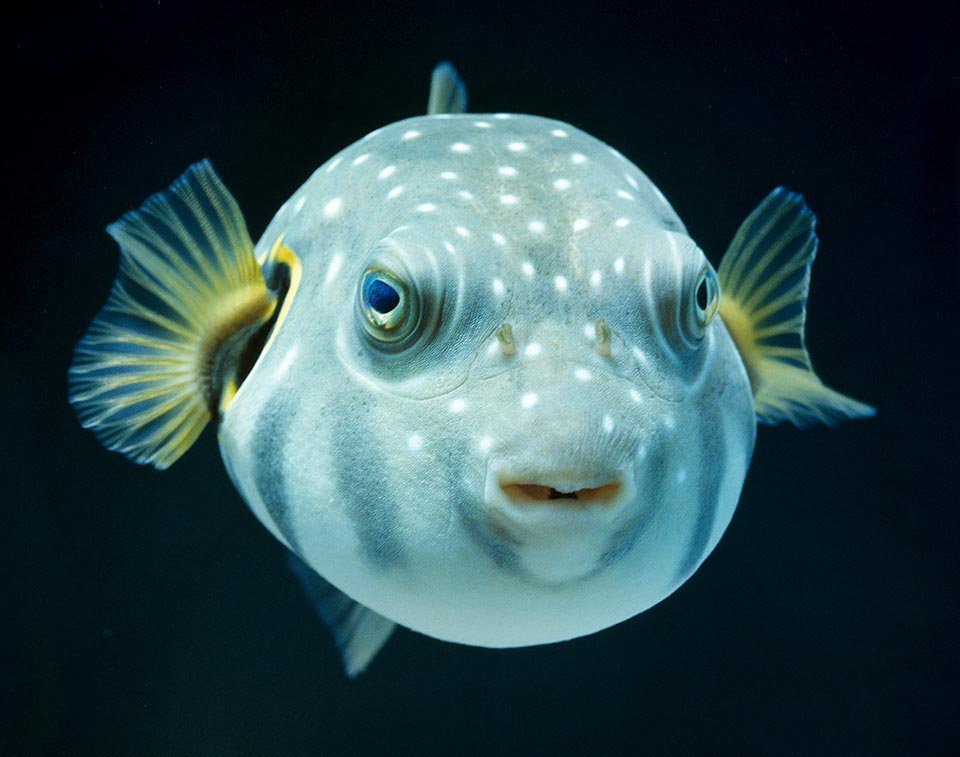 But the Caribbean, the Curly fish or White-spotted puffer (Arothron hispidus) is present in all tropical and temperate warm seas © Giuseppe Mazza

The White-spotted puffer (Arothron hispidus Linnaeus, 1758), belongs to the class of Actinopterygii, the ray-finned fishes, to the order Tetraodontiformes and to the family of Tetraodontidae.

The name of the genus “arothron”, comes from the Greek “a”, privative, and “rothron” = nostril, in fact in this genus the nasal tentacles, forked at the extremity, do not show apparent openings, they are, therefore, “without nostrils”, but it seems that they have however olfactory functions due to the presence at the base of tiny sensory holes. 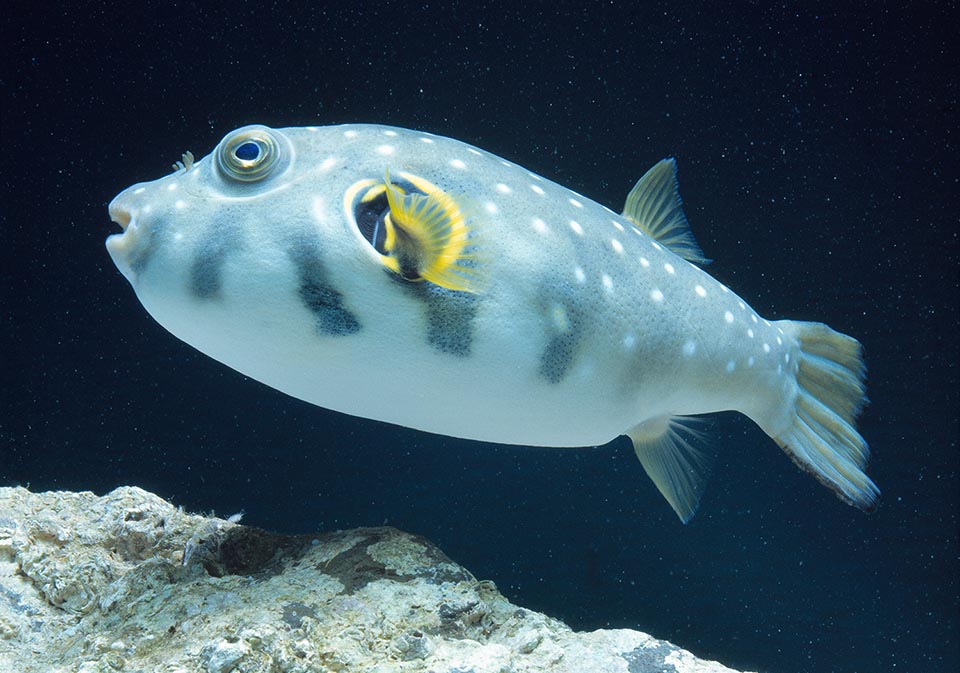 The name of the species comes from the Latin “hispidus” = hispid, due to the fact that it has the body covered by small spinules.

The white-spotted puffer has a very vast distribution. As a matter of fact, it is present along all the tropical coasts of the Indian Ocean and of the Pacific Ocean, but also on some small stretch of the eastern Atlantic, and, what’s even more amazing, in the Mediterranean, in Sicily. 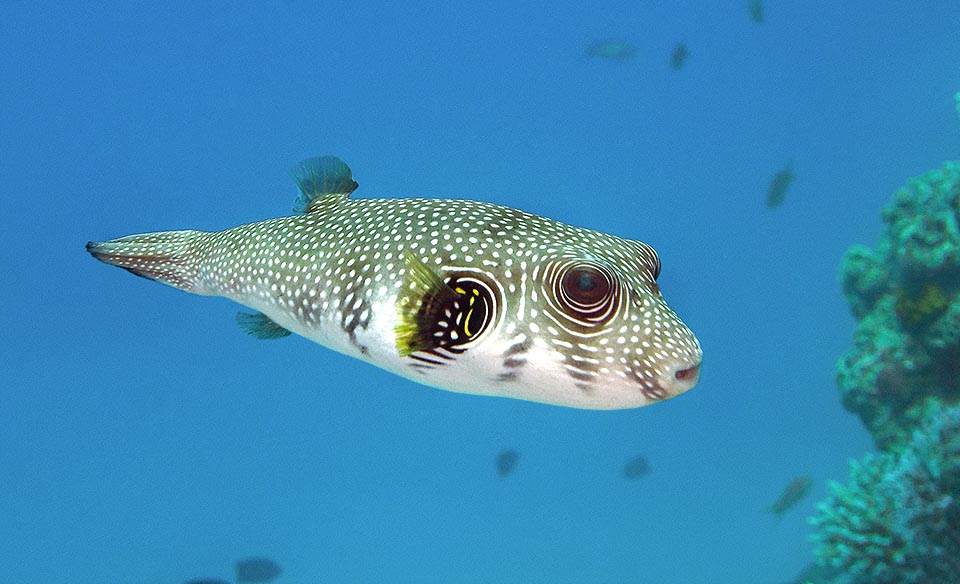 It has not come there through the Red Sea, like many species which follow the ships passing Suez Canal, because it was already there before its opening. Rafinesque in 1810 and Bonaparte in 1845 talk about this. Recently, in 1960, Torchio has found a specimen close to Pozzallo, at the extreme south of the island, but, paradoxically, it has never been fished in Tunisia, Libya or Egypt where the waters are warmer. 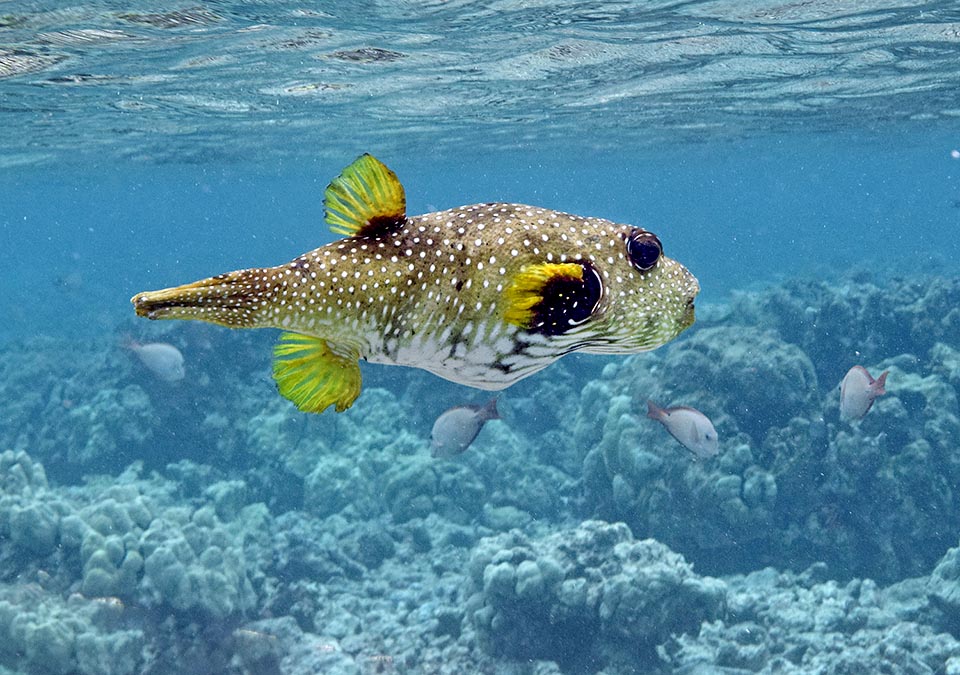 It is a fish living mainly among the corals at 3 to 50 m of depth. The juveniles enter often the estuaries and the lagoons and frequent the submerged grasslands of Halophila, tropical marine rhizomatous plants, of the family of the Hydrocharitaceae, with 30-150 cm leaves. 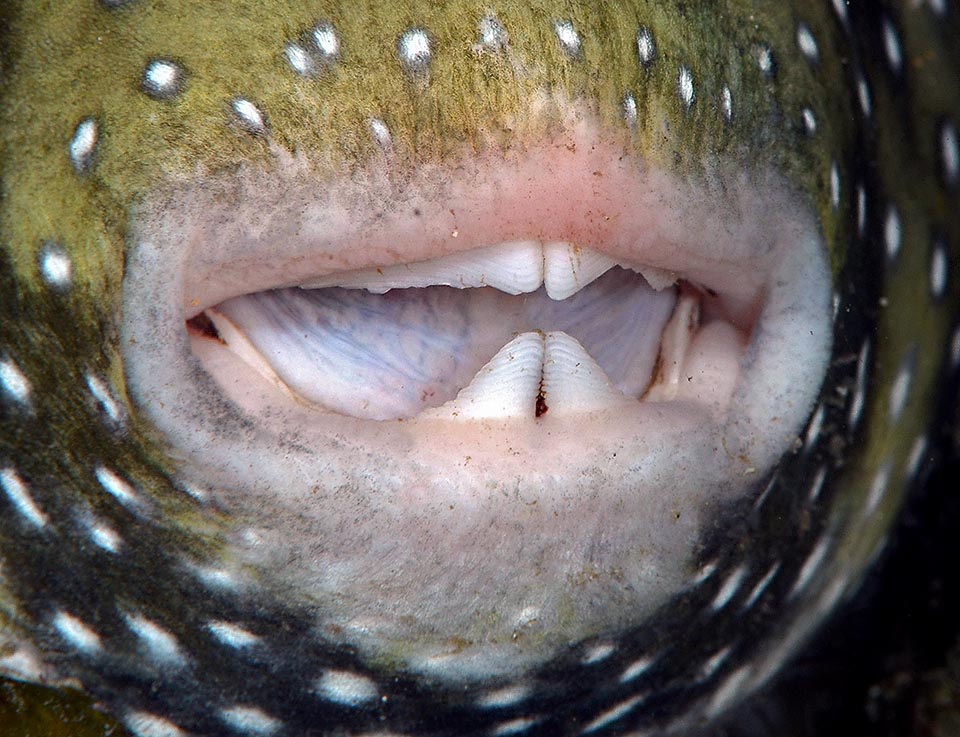 As the family name states, it has only 4 teeth, two solid plates per jaw, that it uses for breaking, like a nutcracker, shells and carapaces © Benoit Lallement

The body is ovoid, covered by more or less prominent spinules, and can swell of water or air when the animal is upset or feels in danger.

When it assumes the look of a ball it is, in fact, difficult to swallow, and who has done this, if it has not passed away due to the tetrodotoxin, the potent poison contained especially on the skin and in the inner organs which inhibits the breathing, while remembering the shape by sure does not have the wish of repeating the experience. 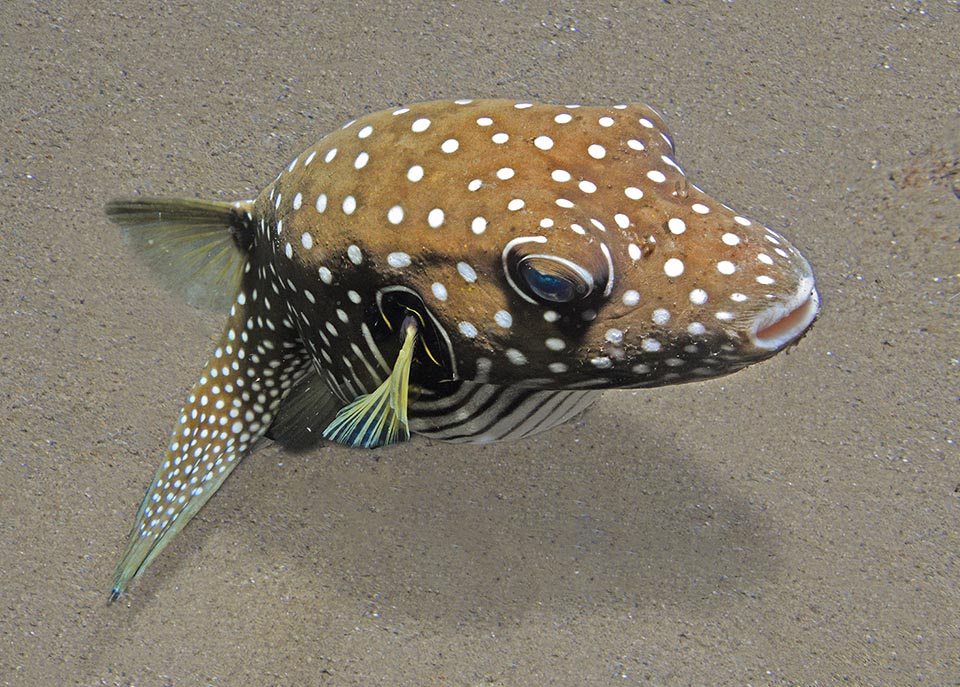 The background colour may be grey, brown or greenish with white circles around the eyes and the pectoral fins. The belly is crossed by white parallel lines © Klaus Stiefel 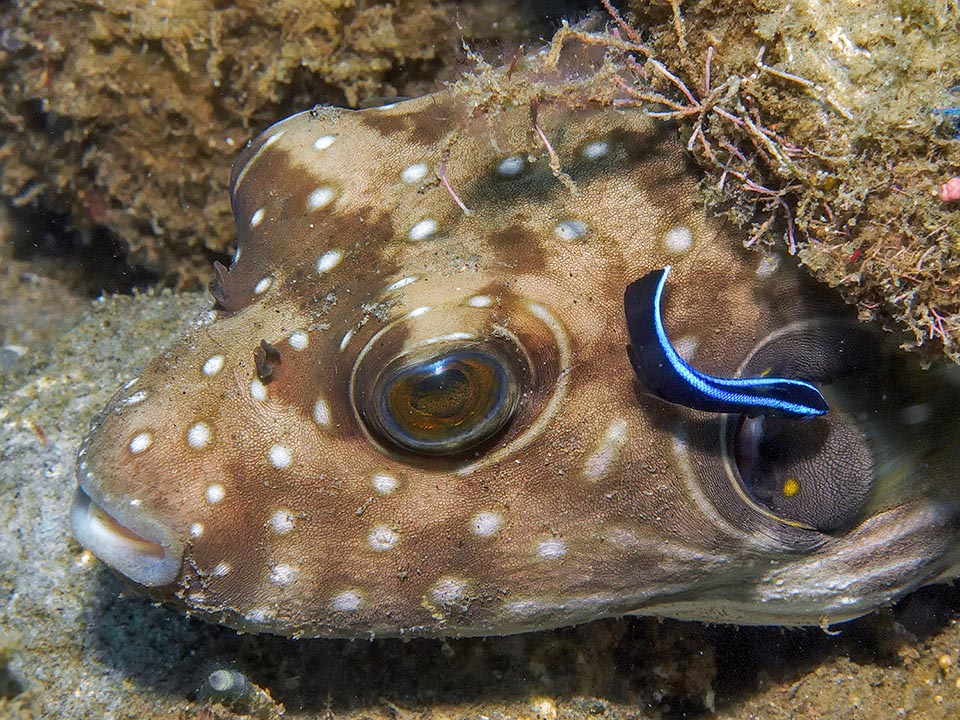 The eyes protrude with respect to the profile of the head. Here, while resting on a bottom, gets its skin parasites removed by a cleaner wrasse © Klaus Stiefel

The ventral fins are absent, as befits the Tetraodontidae which count almost 200 species and have, in line with the name, 4 dental plates forming a robust beak for breaking shells and corals.

The eyes, surrounded by a showy muscular ring, exceed the profile of the head.

The background colour of the back is usually brown, with bluish or greenish hues and numerous white spots, whilst the belly is paler. 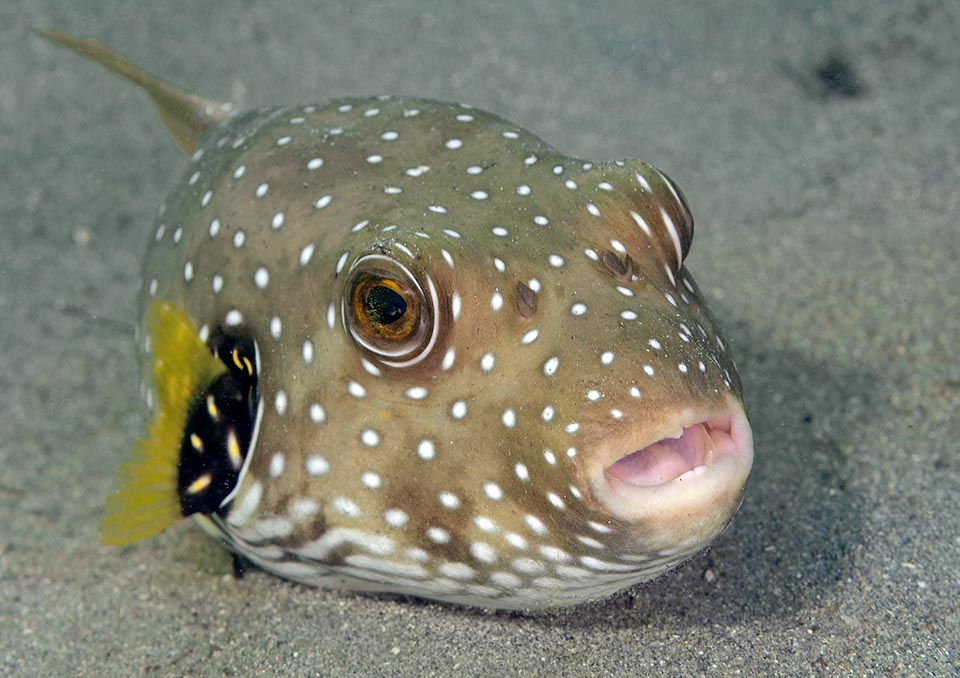 Between the eyes we note two forked nostrils at the extremity that do not show apparent openings, hence the scientific name Arothron meaning in Greek “without nostrils” © Benoit Lallement

On the sides, we see some vertical dark bands and at the base of the pectoral a yellow circle or semicircle surrounding the black spot with the gills openings.

Also the pectoral and the other fins show some yellow, present at times in various parts of the body. Seen the vast distribution, it is in fact obvious that numerous subspecies or races have come to life with multiple variants. 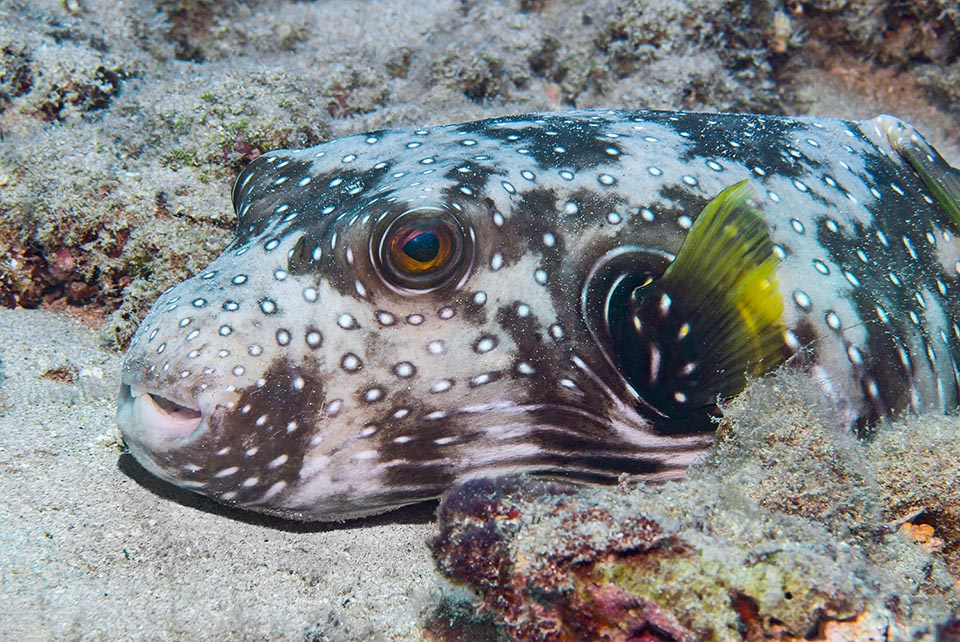 No wonder, seen the vast range, if the liveries can at times display showy variants that enhance the camouflaging effect © Brian Cole

The white-spotted puffer, once adult, is solitary and territorial. It nourishes of crustaceans, molluscs, annelids, echinoderms, tunicates, sponges, corals and of some fleshy seaweed.

It seems that at the moment of the reproduction, the male digs a nest into the sand inviting the female to spawn. 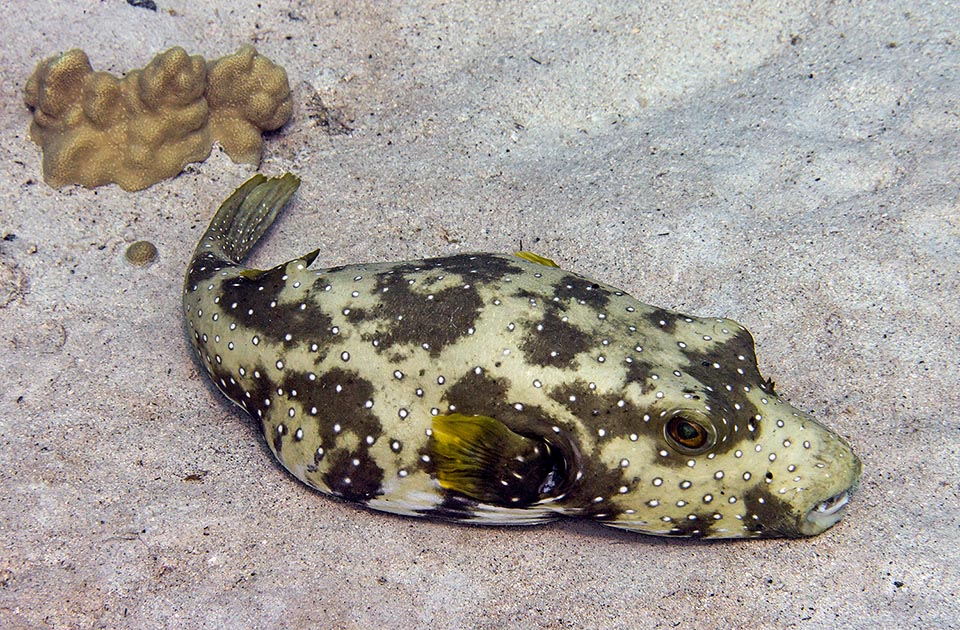 In addition, it’s a fish with few foes, as the skin and the inner organs are soaked with tetrodotoxin, powerful poison, fatal also for man, that inhibits respiration © Brian Cole

Little is known about the larval stages, but it is not, by sure, and endangered species due to the great diffusion, the fact that practically does not have natural foes and that the populations may double in only 1,4-4,4 years.

Apart some aquarists, and the maniacs of the fugu, a dangerous Japanese dish which utilizes also analogous species, it is not even menaced by the man.

The fishing vulnerability index is still moderate and marks 40 on a scale of 100. 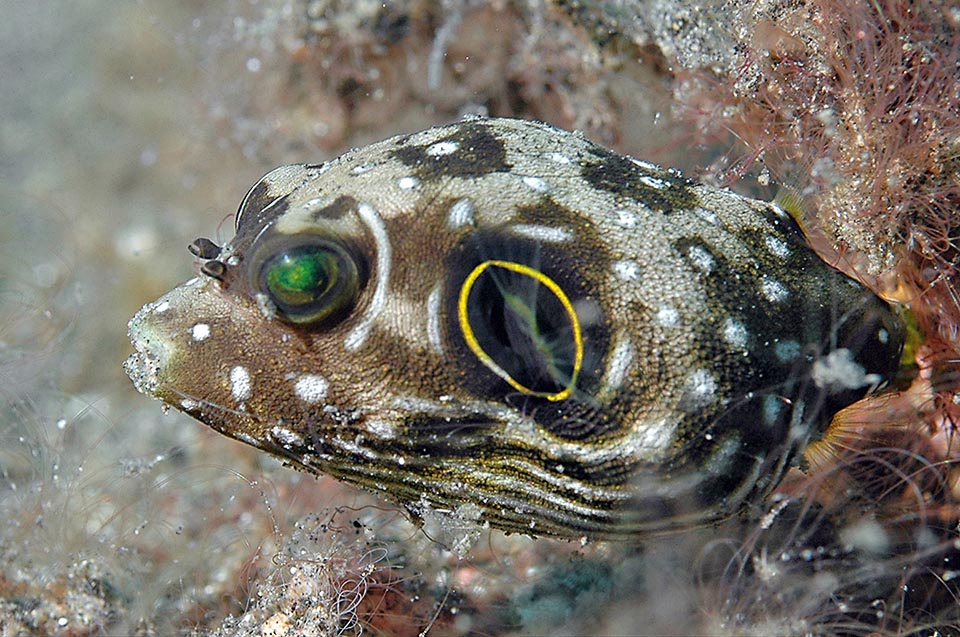 Juvenile with a yellow circle around the pectoral fin, a peculiarity that can be found also in adults. The White-spotted puffer is not an endangered species © Benoit Lallement